Quicken has released version 6.0 of its popular finance and budgeting software that's twice as fast on Apple Silicon, according to the press release. 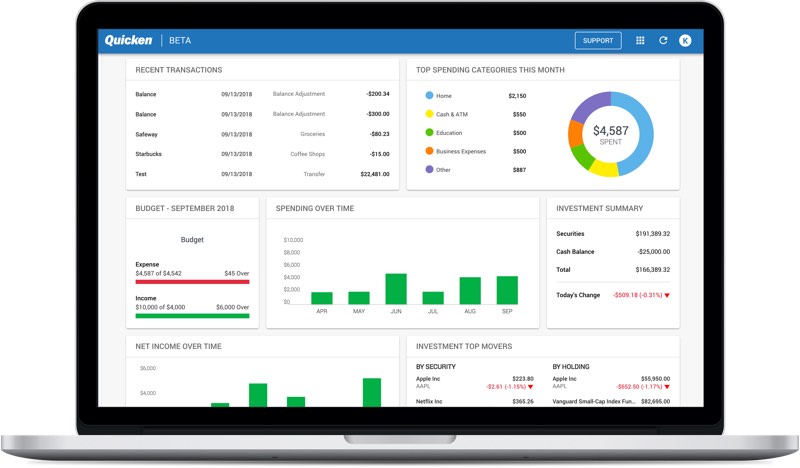 The new version is a universal app that allows it to run natively on Apple's M1-powered machines for a faster and more seamless user experience, while the interface builds on Apple's new UI design signature for macOS Big Sur.

"Quicken made a name for itself as the first personal finance solution to be used and trusted by millions of users," said Quicken CEO Eric Dunn. "As the market leader, we are proud to be on the cutting edge with this announcement of our support for Apple Silicon and Big Sur, featuring an upgraded yet familiar user experience and significantly improved performance. Quicken's reports run twice as fast on Apple Silicon, demonstrating the power of Apple Silicon's new CPU."
Click to expand...

This version promises to make it easier for users to manage all of their financial accounts in one place, with new tabs and icons that can be used to display all transactions across accounts with one click.

New features offer a more seamless experience around account settings and payments, according to the company, and in addition to updates in the Bills & Income section, the update also offers deeper analysis in New Worth Drill-Down Reports.

Weirdly, this makes me want to do my finances (twice as fast).

everybody on Wall Street will go with M1 now, every second there counts
Reactions: TakeshimaIslands, BeABetterApple, calstanford and 3 others
Comment
A

With so many positive articles coming out. I wouldn’t be surprised if more companies try to get their product on M1 Macs as fast as possible.
Reactions: mhnd, amartinez1660, LeadingHeat and 4 others
Comment
K

I wish there was something like this without a subscription
Reactions: caoimhe, SpacemanSpiffed, mhnd and 9 others
Comment
K

So, it will take one-half second instead of one second to generate a report. Nice, but I'd rather Quicken's reliability and troubleshooting ease with downloading transactions improve. Also, give me the ability to disappear features I don't use.
Reactions: decypher44, mevans7, mainemini and 2 others
Comment
L

The fact that Apple Silicon runs faster, cooler and longer than X86 really does seem like the kind of generational leap that will result in a new chapter for Apple’s conventional computing efforts. I can legitimately see this increasing demand for their products at a bare minimum, and possibly opening up new markets for them. Instant-on all-day desktop computing at room temperature.
Reactions: rbgaynor, mhnd, TakeshimaIslands and 3 others
Comment

I use an elsborate numbers sheet, but I don't track my expenses - just assets. And the only thing I don't have to enter manually are the stock values
Comment
A

Just asking .. this is a low cpu load app. No-one will notice any difference.
Only apps that do very heavy CPU work will benefit AND are noticeable faster.

That said, my MBA M1 does feel snappier when launching apps in general.
Reactions: mevans7 and MacLawyer
Comment
D

I’m betting we are going to get a lot more headlines like this. Just the beginning
Reactions: mhnd, amartinez1660 and MacLawyer
Comment
M

Quicken is such a mediocre product. I might as well wait for the M10 to come out. Sine this Apple's FIRST try at major computer chips, give them time to make it right.
Reactions: name99, TakeshimaIslands, LeadingHeat and 1 other person
Comment
1

Ok, <insert random app> runs x times faster on M1, I get it. And I think it is perfectly fine to post such things as the M1 is completely new and we're all excited.

But why add marketing BS and pricing details? Is this a paid post? I think MacRumors lacks transparency sometimes.
Reactions: IG88, decypher44, TakeshimaIslands and 3 others
Comment

123 said:
Ok, <insert random app> runs x times faster on M1, I get it. And I think it is perfectly fine to post such things as the M1 is completely new and we're all excited.

But why add marketing BS and pricing details? Is this a paid post? I think MacRumors lacks transparency sometimes.
Click to expand...

It's not a paid post. Quicken is a popular app, hence we made an editorial decision to highlight the update for M1 Macs.

If anything was published on MR as a "paid" article, we would always be up front about it. Likewise, if affiliate links exist in a post, we always highlight the fact.

In my four years at MR, I've never been asked to run an "advertorial". Not once.
Reactions: rbgaynor, DamoTheBrave, mhnd and 25 others
Comment
A

Quicken was fairly sluggish on my 2018 MacBook Air. I'm not sure why exactly, but I do agree that it is much better on Apple Silicon.
Reactions: Ener Ji
Comment

Serban55 said:
everybody on Wall Street will go with M1 now, every second there counts
Click to expand...

You know this is a personal finance and budgeting app right?
Comment
U

What’s the baseline though? Twice as fast as the unoptimized version?


Twice as fast as the previous version on Intel?

One isn’t noteworthy at all, while the other is actually impressive.


Starting to sound like Apples product pages. “2.1x as fast” means nothing when you don’t know what the baseline is.
Comment

You and me both. So sick of everything moving to a subscription model.
Reactions: caoimhe, SpacemanSpiffed, jlforester and 3 others
Comment
M

Can anyone recommend an alternative to Quicken?
Reactions: mhnd, ececlv and mevans7
Comment

Rantipole said:
You and me both. So sick of everything moving to a subscription model.
Click to expand...

at this point you basically need a software like this just to keep up with subscriptions! worst is, they dont just charge at the beginning of the month, no they always charge on the date you signed up which makes it even more of a mess to keep track off
Comment

Marzzz said:
Can anyone recommend an alternative to Quicken?
Click to expand...