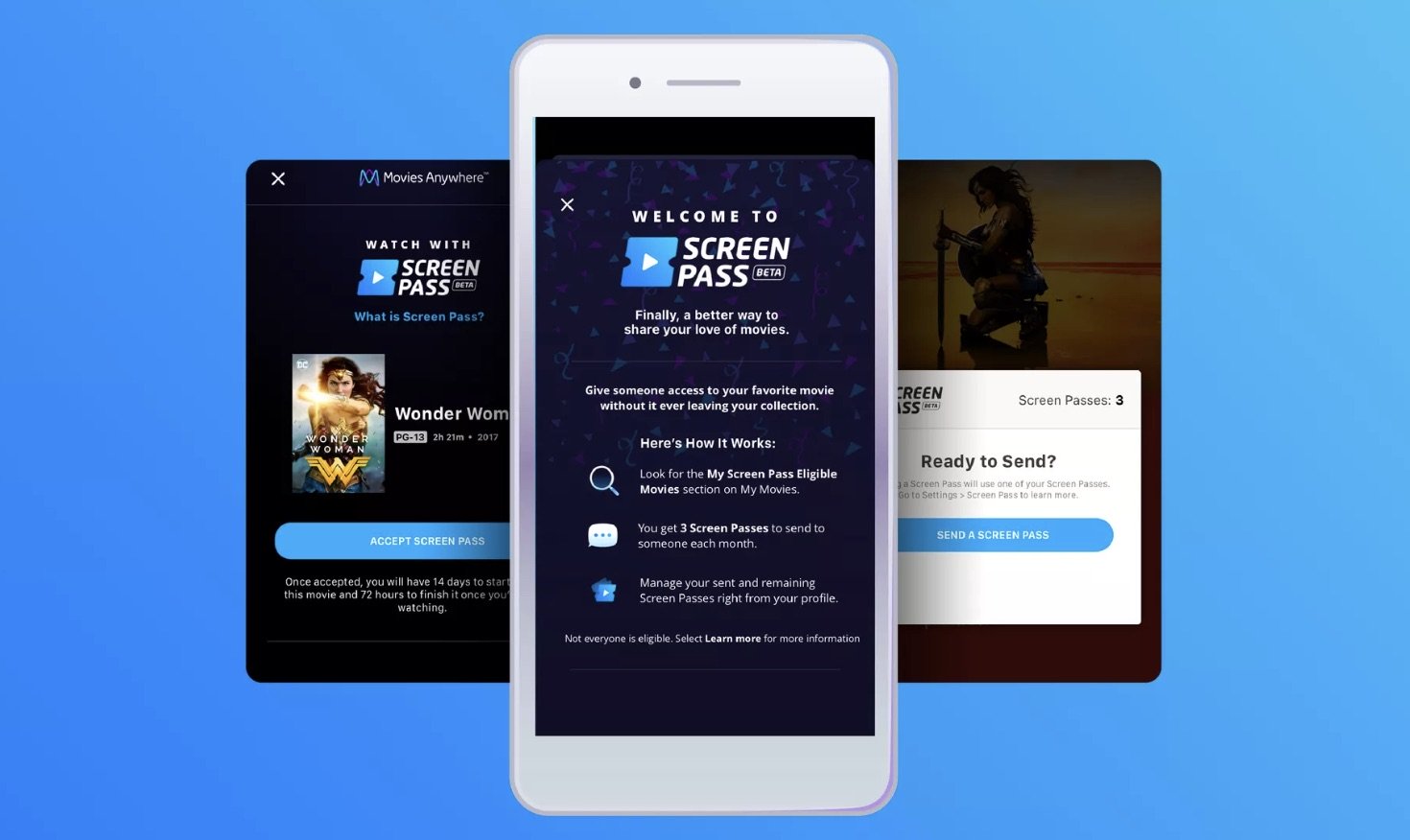 Screen Pass will let you share up to three films each month, and your friend will have seven days to accept the offer, after which they will gain access to the film for 14 days. Once started, recipients will have three days to finish watching the film.

Both users will need a Movies Anywhere account, but there won't be a limit on how many times a film can be shared or how many people you share it with in a month. This means that you can share the same movie to two different people, for example, while still being able to watch it in your own library.

Not every movie will support Screen Pass, but Movies Anywhere said that over 6,000 titles will be eligible when the feature kicks off in beta later today. Eligible movies will be determined by studios, so it's likely that newer releases or very popular films won't see Screen Pass support.

Movies Anywhere is a digital locker service that houses all of your movies from platforms like iTunes, Amazon Video, Vudu, Google Play, Microsoft Movies & TV, Fandango Now, and more. When synced with Movies Anywhere, all of these accounts feed into the central service and let you see your entire digital collection in one place.

The closed beta will start today at 1 p.m. PT, and an open beta is planned for May. Afterwards, a wide launch of Screen Pass is slated for later in the year.

They need to roll this out ASAP. People are going to be really bored on lockdown. Maybe even raise the limit on sharing for now.
Reactions: martyjmclean
Comment
R

This is pretty sweet actually, though you used to be able to share your whole library using UltraViolet a few years ago with something like 3-5 people. So sort of a step back, but this seems like a pretty reasonable middle ground.

Now if only TV shows had a similar digital locker.
Comment
C

Apple should be doing this themselves. Along with Books.
Reactions: Oblivious.Robot, martyjmclean, BlueParadox and 4 others
Comment
K

reallynotnick said:
This is pretty sweet actually, though you used to be able to share your whole library using UltraViolet a few years ago with something like 3-5 people. So sort of a step back, but this seems like a pretty reasonable middle ground.

Now if only TV shows had a similar digital locker.
Click to expand...

Now if only it really was Movies Anywhere and not US only
Reactions: Oblivious.Robot, martyjmclean, r_mack and 2 others
Comment
2

How does one apply for the closed beta?
Comment

First same day movie releases at home, and now this? The movie gods are smiling upon us today!
Comment

I bet those friends get lots of spam asking for them to join.
Comment
N

I'd argue that the most urgent problem with Movies Anywhere is that it's still missing support from several movie studios. As a result, you can purchase 100 films on Vudu or Amazon, then find that only 60 of them are available on Apple TV.

Let's get the other studios on board, please.
Reactions: brentsg and kylew1212
Comment

Back in the 80’s, studios feared the humble cassette tape. You could record albums with great (not perfect) clarity and make “mix tapes” for your car, office or home.
I got exposed to a vast array of music I would have never have heard of, any other way. I think this is why there are so few musical artists today, compared to the 70-90’s.
If you like the movie - or TV series - you will buy it. If not, you won’t. The studios may lose a sale that they would never have made anyway - or gain a sale from a new fan.

1). Curious. Like folks who pulled down Photoshop, saw how complex it was and said “oh, not for me” and never tried it again

2). Were never interested enough to see the movie in the theater, but looked. Some said “glad I saved money” so studio lost a sale they never had; others said that’s good stuff - then bought the higher resolution dvd later on

3). Super fans. Saw Iron Man several times at the theater, loved it. Yanked down the poor quality flick to watch until it came out on DVD, then bought that

confirmed said:
Apple should be doing this themselves. Along with Books.
Click to expand...

Movies Anywhere links to collections across iTunes, Google Play, Amazon Prime, Fandango Now and many others. This is better than an Apple-only play.
Comment
C

FaustsHausUK said:
Movies Anywhere links to collections across iTunes, Google Play, Amazon Prime, Fandango Now and many others. This is better than an Apple-only play.
Click to expand...

MoviesAnywhere doing this proves that studios are willing to allow this. No reason it can't be offered both by Movies Anywhere and by Apple. In either case, this should become the standard for digital stores and purchases.

Personally, I'd like to see Apple do it as well, so I can lend my content to friends/family who already use Apple services and may not want to setup another account. And since Apple's stores also offer TV Shows, Books, and Music, they're in a great position to set a standard for this type of content sharing.
Reactions: martyjmclean
Comment
D

julesme said:
I'd argue that the most urgent problem with Movies Anywhere is that it's still missing support from several movie studios. As a result, you can purchase 100 films on Vudu or Amazon, then find that only 60 of them are available on Apple TV.

Let's get the other studios on board, please.
Click to expand...

Definitely agree though in our case, I'd say we're running closer to 80-85% of movies porting over. Funny enough, just in the last couple of days, I noticed a couple of movies we purchases months ago, are now in iTunes (they were always in the Vudu app).
Comment
T

I guess they would expire after 14 days, and not every movie can be shared, but sharing is also the enemy of disaster with right holders..

Would they like this? I think i'm beginning to understand why this is a closed beta.
Comment

Just hints at the real issue...so you spend your life acquiring digital media. When you die ...? It's tied to YOU. Your account, yes? So can you leave the media to your kid? A spouse? Do they need to keep your email and account active? I don't believe there are any universal rules or solutions here. But a streaming service, monthly payment may be the answer vs. 'buying' anything. Weird to think about.
Reactions: SRLMJ23
Comment

MacRumors said:
Not every movie will support Screen Pass, but
Click to expand...