The site's Apple Watch Apps section offers a selection of apps that are displayed on an Apple Watch interface, with different views for "Apps," "Glances," and "Notifications." For example, for the upcoming Twitter app, which was shown during the Apple Watch announcement, WatchAware allows users to click to see both what the app itself will look like and what an incoming notification will look like.

Many of the apps on the page use imagery from the apps that Apple showcased when the Apple Watch was first announced, so there may be some significant interface changes, but overall, the site gives a good look at what one might expect to see from the different types of Apple Watch experiences developers can create. 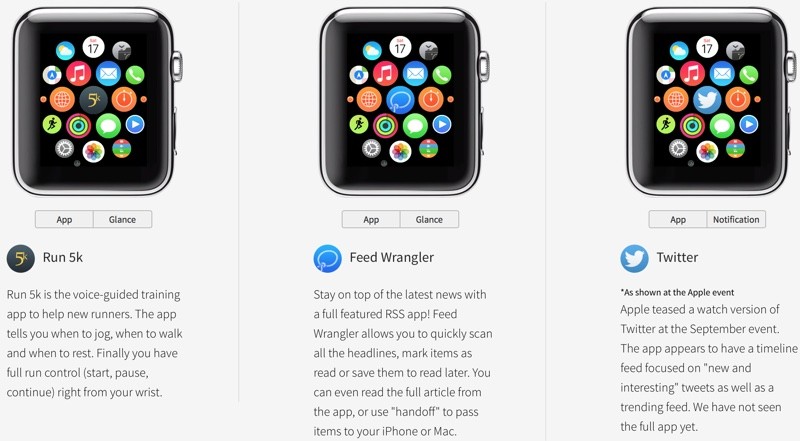 Apple Watch apps are even more in-depth than notifications and Glances, letting users perform tasks like reading tweets and sending messages. Apps, which are built-into and installed via the iPhone, run entirely on the iPhone, with an interface that's beamed to the Apple Watch. By running apps on the iPhone, Apple is able to conserve battery and provide a seamless experience transitioning from watch to phone. Apple has promised apps that run entirely on the Apple Watch will come later in the year.

WatchAware currently features popular apps like Twitter, Facebook, Maps, American Airlines, Pinterest, and CityMapper, which were previously featured by Apple, but there are also several other apps that have been showcased by developers like Deliveries, Run 5k, and Todoist. The site plans to add additional Apple Watch apps as they become available.

Sweet! This should be fun!
B

This looks really cool! Im definitely going to be spending some time on here.

Really? Games, calculator and reading entire news on that little screen? Some stuff will be ridiculous and should stay out of the apple watch.
B

The fact that someone did this is actually hilarious

All to see soon enough I'm sure.
B

All to see soon enough I'm sure.
Click to expand...

They might, but I think most will be running from an iPhone, and relaying the info to the watch. I do believe that eventually there will be downloadable apps.
M

Blainezab24 said:
The fact that someone did this is actually hilarious
Click to expand...

dying at the thoroughly thought through (p.s. English is weird) description

For the iPhone, apps were the killer feature. I believe this is what will make or break the apple watch too. It has got to have useful and good apps.

I don't know. I have been cautiously optimistic about the Apple Watch, but I personally (your mileage may very) wouldn't use any of the apps demonstrated.

This site actually made me want the watch less.
N

so far it looks like the watch is useful if you are too lazy to take your phone out of your pocket..

Nozuka said:
so far it looks like the watch is useful if you are too lazy to take your phone out of your pocket..
Click to expand...

You are correct. Talk about a "meh" product. Sorry Apple. I don't see it.
R

Nozuka said:
so far it looks like the watch is useful if you are too lazy to take your phone out of your pocket..
Click to expand...

Stop saying "too lazy." Perhaps it is too inconvenient or perhaps it might appear rude or perhaps you're not allowed to take your phone out of your pocket.
G

What I don't get about all the Apple Watch naysayers saying this thing will never take off is that Apple is a very profitable company filled with very smart people. I'm not saying everything they make is perfect, but everything they make is definitely profitable. We know very little about it and people are already saying it's a flop. That sounds very familiar: "the iPod is just a hard drive with an LCD display", "the iPhone is just an iPod Touch with a phone attached", "the iPad is just a big iPhone without a phone"...

The Apple Watch will succeed. If Apple weren't absolutely sure of that based on whatever market research they did before starting development, they wouldn't be releasing it.

A spotify remote might sell me on the thing. Thanks to the iPhone's magical ability to close apps that aren't in use, it often won't resume playing via Bluetooth when I get in my car. Control via the watch would be awesome.

Anyone else having the problem with the site not loading?

But here are the tweets:

Yep. Apple probably had it shut down by now.
F

Smart phones brought us the persons who walk and read simultaneously no matter where they are or how crowded the scene is. Soon a good percentage of early adopters will be walking through crowds while staring at their wrist.

FieldingMellish said:
Smart phones brought us the persons who walk and read simultaneously no matter where they are or how crowded the scene is. Soon a good percentage of early adopters will be walking through crowds while staring at their wrist.
Click to expand...

Maybe they just don't want to talk to you.

Blainezab24 said:
The fact that someone did this is actually hilarious
Click to expand...

And some people say the Apple Watch is a solution without a problem.

bushido said:
dying at the thoroughly thought through (p.s. English is weird) description
Click to expand...

Is it thoroughly thought through enough though? (Even weirder English for you there!)

I think the app Milewiz has got a lot of potential. If it could alert you by a tap on your wrist if you are speeding, it might actually be a fantastic Apple Watch selling feature.

Only app that appeals to me is the fart app... And I'm only HALF joking.

None of these third party apps are interesting... Hope someone actually makes something I want to see on my wrist...
F

I'm just waiting for the dang thing to come out so once I preorder and love mine, I get to laugh at all the naysayers scrambling to get one.

we're witnessing the iconic Dick Tracy watch take its first steps into reality and 9 out of 10 commenters are flippant cynics who smell 'failure'. crazy, the kids these days. 2nd gen hits, and you'll know why you've been wasting your breath these last couple months.
You must log in or register to reply here.
Share:
Facebook Twitter Reddit Email Share Link
Register on MacRumors! This sidebar will go away, and you'll see fewer ads.
Sign Up
Top Bottom