Official specifications of Sony's new high-end lens-based smartphone-compatible cameras have been revealed in a press release that was accidentally leaked (via SonyAlphaRumors) ahead of tomorrow's unveiling.

As expected there are two different fully functional lens cameras that are designed to work in conjunction with a smartphone using a Wi-Fi connection and the newly introduced Sony PlayMemories app. 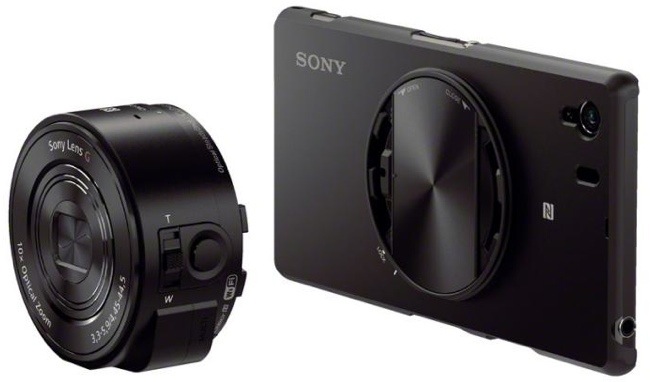 When connected to a smartphone via the app, the camera turns the phone into a real-time viewfinder that is able to release the shutter, start/stop movie recordings, and adjust photographic settings.

Merging the creative power of a premium compact camera with the convenience and connectivity of today's smartphones, Sony today introduced two "lens-style" QX series cameras that bring new levels of fun and creativity to the mobile photography experience.

The innovative Cyber-shot(TM) QX100 and QX10 models utilize Wi-Fi® connectivity to instantly transform a connected smartphone into a versatile, powerful photographic tool, allowing it to shoot high-quality images and full HD videos to rival a premium compact camera. It's an entirely new and different way for consumers to capture and share memories with friends and family.
Click to expand...

The press release contains full specs for the cameras, which include the higher-end DSC QX100 and the lower-end DSC QX10. While the QX100 supports manual use, the QX10 does not.

Both lenses attach to smartphones with a mechanically adjustable adapter, but they will maintain a smartphone connection even when held in a hand separately or mounted to a tripod. They also work as completely independent cameras, with both featuring a shutter release button, a memory card slot, and a rechargeable battery. 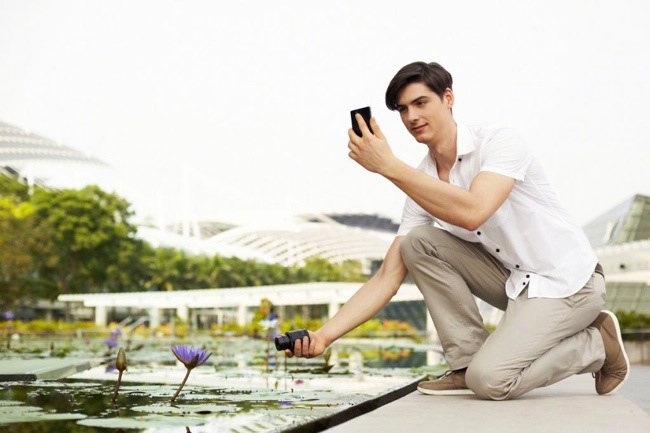 The QX100 and QX10 will be available later this month from the Sony website  and will be priced at $500 and $250, respectively.

That is pretty incredible.
H

I want! I'm not even into photography but I need this.

looks pretty cool. I doubt I'll get it. The camera on my phone is good enough for the quick snapshot, plus I have a Sony Alpha 65 SLT camera for better stuff. If this lens thing is half as good as my SLT, it'l be really good.

This is the kind of stuff I like to see from Sony. Looks amazing.
T

This is going to be a very disruptive product if Sony does in fact make it near effortless to interface with a smartphone (for me iPhone).

I like the fact that the lens module can be used independently of the smartphone up to some as yet unknown range. I especially favor the 1 inch imager as an excellent compromise of size over image IQ (I also have a Nikon V1).

I'll will be preordering the QX100 when I see it available on Amazon.

Wonder if it will be designed for the 5, and hang off a bit on the 4S.

Does that save photos to the camera roll or a separate Sony app?
J

Apparently they removed RAW support though..

Way cool. Not in the market for it, but I love the idea of it.

Whether or not this product succeeds this is the future. Smartphones replaced dozens of other objects. Now it's time for the "things" to fight back by interfacing with our phones. Controlling a NEST thermostat is an early example, if somewhat limited and simple.

Kudos to Sony for pushing ahead and trying to lead everyone to the next big movement.
R

This is cool but wait for execution

I want to know what how far away from the camera you can be and still control it. If it's less than 20 feet, I'll pass. I use a wireless trigger for my 20D (yeah, old school DSLR buddy). I would love to use this for wild life shots. A shutterless camera and remote control. No more spooking the birds with the gatling gun shutter on my 10 year old camera.
G

That's interesting, but I'm not sure I understand the purpose. Why would this be more desirable than buying a camera that is independent of your phone?
C

Sky Blue said:
Does that save photos to the camera roll or a separate Sony app?
Click to expand...

Looks like you need the separate Sony App to use it, but I'm sure it would allow you to save the photos to the camera roll once you've taken the photos. I think every camera app lets you do that.

Strange as this product seems at first glance, I do sometimes wish for a way to have the full Internet-enabled photo-app ecosystem of my iPhone PLUS fully standalone-camera-quality zoom/telephoto. I'd carry it for nature hikes and special events, leave it home the rest of the time. Awaiting reviews!

That is really neato. I'm thinking about it as a camcorder replacement, for situations where my iPhone camera isn't quite good enough. The QX100 is supposed to have 10X optical zoom. I'd rather have 12X but if you can zoom and focus and adjust exposure while shooting using the app.......
I

I guess I don't see the innovation here. Innovative would have been if the standard camera on the smartphone could do this. Seems like it will fill a niche market. I paid 4 figures for my dSLR and wouldn't pay a hundred for this...
T

I've been waiting for a camera like this for ages!

Hope it gets to the UK soon!

Edit: I thought it was an actual camera, not a lens that was stuck onto a phone... Maybe not then haha
D

I think Apple could improve on this idea. First things first, remove the "clip" or hanging of the camera off the body of the phone. This thing should be magsafe connected to the back "minus" any actual port to plug into. Meaning, you should be able to wave the phone over the lens and it just jumps on the back of the phone. Slidable from end to end of the phone just for comfort, and a safe release button on the lens to pop it off. Visually, the iPhone would look no different, but there would have to be some kind of magnetic connection to hold the lens. Also, the lenses would need to be very light (as much as possible), and Third parties would need to be able to sell there brand of lenses (Nikon, Canon, Sony, Olympus, etc).

The independence of the lens from the phone is SPOT on there. That's excellent, don't change that. However, I'm in favor of an even SMALLER solution. Currently the iPhones lens is good enough for snap shots. But without any optical zooming. It sucks for taking better shots. . Since the body of the phone doesn't really allow for much of that (really none), and of course putting any mechanical processes in the way would require even more space then the body would hold. How about we use the plug at the bottom of the iPhone for a perfectly fitting (long rectangular tube) lens system? I'm guessing the optical wouldn't be that much as far as zooming goes, but compared to now, its better then nothing, AND MUCH smaller (you could keep it plugged in to the phone). So no extra devices to carry around. Again, this would be open to third party solutions. The Lens would swivel on the lighting port plug end (somewhere in the middle), and have either a manual zoom twist in the body of the lens, or some software controlled feature of pinch to zoom, or double tap to zoom in.

If there are no other patents on this idea. I SAID IT FIRST!!!!

The only thing that has me worried here is that if it is connected via wifi, then that means disconnecting from my wifi hotspot, or router... I know you could use 3G if you're using a phone, but in my case I'm using an iPod touch.
M