The Open App Markets Act [PDF] is meant to create "fair, clear, and enforceable rules" that will protect competition and strengthen consumer protections. According to the three senators, Apple and Google have "gatekeeper control" of the two main mobile operating systems and their app stores, allowing them to dictate the terms of the app market.

Under the terms of the bill, which applies to companies that own or control an App Store with more than 50,000,000 users, Apple would not be able to require developers to use its own in-app purchase system, and it would be required to allow developers to distribute apps through alternative app stores.

Other wording in the bill would prevent Apple from retaliating against developers that decided to distribute apps using alternative means, and Apple would also not be allowed to unreasonably preference its own apps. The company would need to provide developers with access to operating system interfaces, development information, and hardware and software features.

In a statement, Blumenthal said that the legislation would break the competitive hold that Apple and Google have over the app market while providing mobile users with more control over their devices.

"This legislation will tear down coercive anticompetitive walls in the app economy, giving consumers more choices and smaller startup tech companies a fighting chance. For years, Apple and Google have squashed competitors and kept consumers in the dark--pocketing hefty windfalls while acting as supposedly benevolent gatekeepers of this multi-billion dollar market. I'm proud to partner with Senators Blackburn and Klobuchar in this breakthrough blow against Big Tech bullying. This bipartisan bill will help break these tech giants' ironclad grip, open the app economy to new competitors, and give mobile users more control over their own devices."
Click to expand...

Blackburn said that Apple and Google's refusal to allow for third-party App Stores is a "direct affront to a free and fair marketplace, and Klobuchar said that the legislation levels the playing field and will ensure an "innovative and competitive marketplace."

In an interview with Reuters, Blumenthal said that he found the "predatory abuse" of the two companies "deeply offensive on so many levels." He said that he expects companion legislation in the House of Representatives "very soon."

Earlier this year, U.S. lawmakers introduced sweeping antitrust legislation that would result in major changes to the tech industry if passed, with the measures coming as the culmination of a 16-month antitrust investigation.

Update: In a statement to MacRumors, Apple reiterated its commitment to ensuring that apps are delivered to customers in a way that is safe and trustworthy.

"Since our founding, we’ve always put our users at the center of everything we do, and the App Store is the cornerstone of our work to connect developers and customers in a way that is safe and trustworthy. The result has been an unprecedented engine of economic growth and innovation, one that now supports more than 2.1 million jobs across all 50 states. At Apple, our focus is on maintaining an App Store where people can have confidence that every app must meet our rigorous guidelines and their privacy and security is protected."
Click to expand...

Yay! Give the consumers what they deserve! It really is a win/win for everyone. It’s time developers get paid real money + incentives. (For their hard work, creating/developing/innovative the apps).

This number could be a lot higher! FACTS!!! 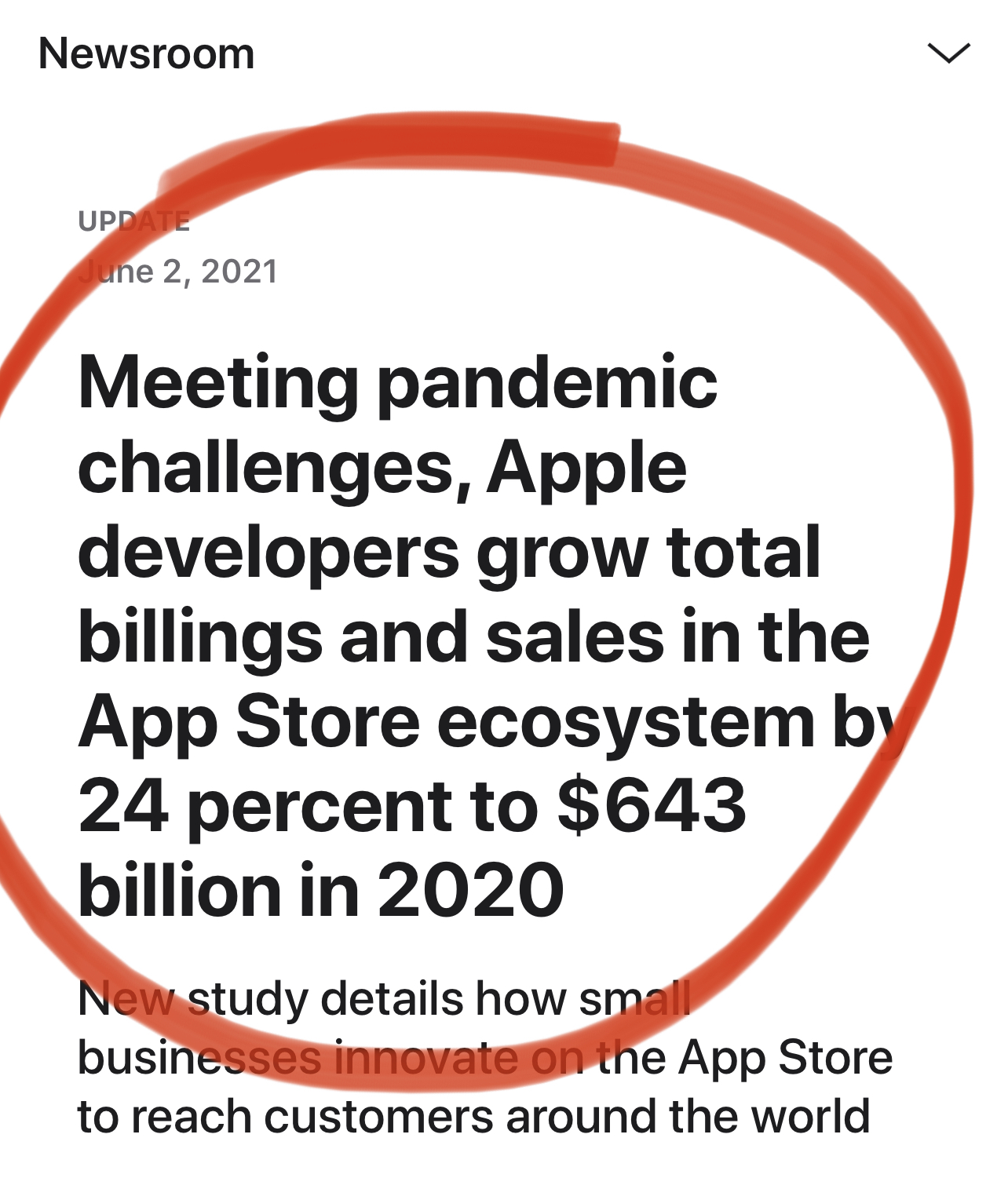 Yea should be very interesting as a developer that is.
Reactions: princessLover, JKAussieSkater, UserThatExists and 8 others
Z

Controversial, but I don't see how formally ending Apple's monopoly over in-app purchase revenue would harm consumers. They still have a choice to use Apple's system.
Reactions: Johny B <3, princessLover, JKAussieSkater and 41 others

This is great. If you don’t wanna install from a third party App Store or don’t wanna sideload, then just don’t do it.
Reactions: Johny B <3, princessLover, JKAussieSkater and 50 others

Whatever it takes… Just get it done.
Reactions: Kram Sacul, princessLover, JKAussieSkater and 31 others

I would love this. Things are getting out of control. I practically yelled "Oh **** you Apple" when I heard iDOS was removed a few days ago.

I am confused though; doesn't Android already allow sideloading?
Reactions: princessLover, JKAussieSkater, 4nNtt and 25 others
R

Does that mean I can side load any iOS app into the M1 Mac. Right now the developer has to agree.
Reactions: fc4090, rjp1, shadowbird423 and 1 other person

Will the government next force Walmart to allow Target to advertise their own products and install their own cash registers in Walmart stores?
Reactions: colourfastt, bgillander, Kram Sacul and 129 others

Would LOVE to see it

Far past time
Reactions: Kram Sacul, princessLover, RedRage and 25 others

If this is the case, then the same should apply to Game Consoles: Playstation, Nintendo, Xbox, etc...
We want to sideload to the consoles as well.
Also, I want to be able to install 3rd Party apps on my Mazda.
Reactions: bgillander, Phaseangle, princessLover and 68 others
A

It's coming. There can be no doubt. It has even bipartisan support.
Reactions: JKAussieSkater, RedRage, UserThatExists and 16 others
D

I like iOS secured and the way it is, no thank you
Reactions: colourfastt, JKAussieSkater, eduardoregueiracampos and 111 others

dominiongamma said:
I like iOS secured and the way it is, no thank you
Click to expand...

Then don't use third party app stores.
Reactions: Hammerd, princessLover, JKAussieSkater and 61 others

This could actually be bipartisan right? Be cool to see some emulators on iOS
Reactions: JKAussieSkater, Nica, RedRage and 16 others
J

dominiongamma said:
I like iOS secured and the way it is, no thank you
Click to expand...

Then don’t sideload apps or install apps from any source other than Apple, if it makes you feel better. If a developer refuses to make their app available through Apple’s store, either deal with it or refuse to do business with them. Problem solved.
Reactions: princessLover, JKAussieSkater, jxr182 and 50 others
V

This is going to shake the gaming market because then xbox, playstation and steam are going to have to make changes too!
Reactions: Phaseangle, JKAussieSkater, wbeasley and 15 others

kiensoy said:
This is great. If you don’t wanna install from a third party App Store or don’t wanna sideload, then just don’t do it.
Click to expand...

It's not a winning situation for Apple Developers. The Torrent sites will be loaded with apps that can be installed without having to jailbreak your device.

If you let politicians control Technology, we will have total chaos.
Reactions: bgillander, secretbum, driveparty and 93 others
E

as a consumer, I love this. As a former Genius Bar employee... I pity my old coworkers haha. God, that is going to be a crap-show ?
Reactions: princessLover, JKAussieSkater, RedRage and 29 others
J

Amazing Iceman said:
If you let politicians control Technology, we will have total chaos.
Click to expand...

Then Apple should fix this and make this legislation toothless while it has a chance.
Reactions: princessLover, wbeasley, tennisproha and 8 others

Developers won't get pay anything. Users will be able to side load their apps or get them from the Torrents, and install them without having to Jailbreak their devices.
Reactions: secretbum, driveparty, MacNeb and 47 others
A

It's not a winning situation for Apple Developers. The Torrent sites will be loaded with apps that can be installed without having to jailbreak your device.

If you let politicians control Technology, we will have total chaos.
Click to expand...

I think this was the real reason for the closed Apple ecosystem from the get go. Not so much security for the consumers but (revenue) security for developers.
Reactions: secretbum, WaltCD, bousozoku and 13 others