A classic operating system afficionado, z80 has setup the NeXT Information Archive, a web repository for all things NeXT. He has placed many scanned NeXT brochures, documents and the like on-line to allow folks a glimpse at the incredible hardware and software put out by NeXT in the late 80's-early 90's. Steve Jobs formed NeXT after being pushed out of Apple in the mid 80's and produced a revolutionary Unix operating system known as NEXTSTEP, from which Mac OS X is derived. (Little known fact: the WWW was created on a NeXT Cube.) A great site chronicling a rather significant part of computing history.
Related links:
<ul><li>Intro to NEXTSTEP
<li>Black Hole, Inc. (NeXT computers for sale)
<li>Merger of Apple and NeXT
<li>blakespot's NeXTStation
</ul>

I remember seeing a whole room of machines in 92 at my school - OSU and thinking, wow! They didn't last much longer after that, and I regret never having a chance to play around with one.

Blakespot, how long have you had yours? And the big question is, what do you do with it?

A quote from the merger article

One of the coolest "bands" in computer history was getting back together and at least some people were confident that there would be lots of really cool things happening in the near future.

Amazing how right they were!

and, of course, the entire development envirnment on OSX is NeXTStep - nibs, Proj Builder, Interface buiolder...
oh and Objective C, too ;-)

All classic Mac OS lovers, drink the kool-aid and repeat after me, "This is a good thing!"

Personally, I never would have bought a Mac if they hadn't bought NeXT. I'd probably be using Linux 100% of the time now too.

Doesn't matter for me if OS X is opennext.
X works and if it is thanks to openstep, great.
I never saw no Next machines, but if OS X is a kid from Openstep then Next must have been a true wonder!

Originally posted by Geert
Doesn't matter for me if OS X is opennext.
X works and if it is thanks to openstep, great.
Click to expand...

It is thanks to OpenStep, indeed.

I never saw no Next machines, but if OS X is a kid from Openstep then Next must have been a true wonder!
Click to expand...

NEXTSTEP really was more of a wonder than OS X as it was released in 1988, offering quite a good bit of what OS X is today, way back when running on 030/040 hardware. Incredible.

not only was it built back then , it had the first commercially availabe remote distrubuted object architecture and it only took one or two guys to maintain the entoiruie UI/OS/Deve tools

The browser (horizontal view) and the spinning ball, as well as a version of the task bar are all next step.

Indeed, it was amazing.

Mac OS X is $125. It's just particularly interesting that the folks who causally buy a Mac and run OS X just really don't likely have a feel for the incredible nature of the OS and its history. It was my dream to be able to use NEXTSTEP only and forever, but alas the lack of mainstream apps had me installing Windows on that NEXTSTEP PC after 9 months or so. Finally--with Mac OS X, it is possible. The power + the mainstream. Revolutionary stuff.

And leaps and bounds more appealing and plausible than Linux on the desktop.

All up in your bidness

This is all really cool stuff.

What I wish I could do is go back to 1993 and tell all Mac users that in 8 years, Steve Jobs will again be the CEO of Apple, and the OS they'll all be using will be based upon BSD Unix. Imagine the laughs I'd get.

Thank you for the thread, and for the links. I have spent the last few hours following these links and the links within them, and have learned much about Apple's recent history in particular, and user interface design in general.

Originally posted by Phaedrus
Thank you for the thread, and for the links. I have spent the last few hours following these links and the links within them, and have learned much about Apple's recent history in particular, and user interface design in general.
Click to expand...

I much apprecaite that feedback, Phaedrus. I often wonder if my incessant ramblings about NeXT and that "wonder" that I see surrounding it falls on disinterested ears for the most part! Thanks.

NeXT's history is the history of the modern Mac.

any chance I can get copies of the Next OS for intel? I have a spare pc that I would LOVE ot use it on - I did the same when I worked for NeXT here in the valley and didn't/couldn't make copies of the cds...

I remember the NeXT Book text -- ordered it weeks ahead of time, even though I'd probably never have the money for an actual system. It was to be sooooo unbelievably advanced that the book would be required reading just on technology issues.

Still have it, as well as the first issue of NeXT World (put out by the same folks behind MacWorld).

I have a few copies of NeXT World. I paid $110 for The NeXT Book about 2 years ago on eBay. The same I paid for a NeXT poster I got from eBay 3-4 years ago: 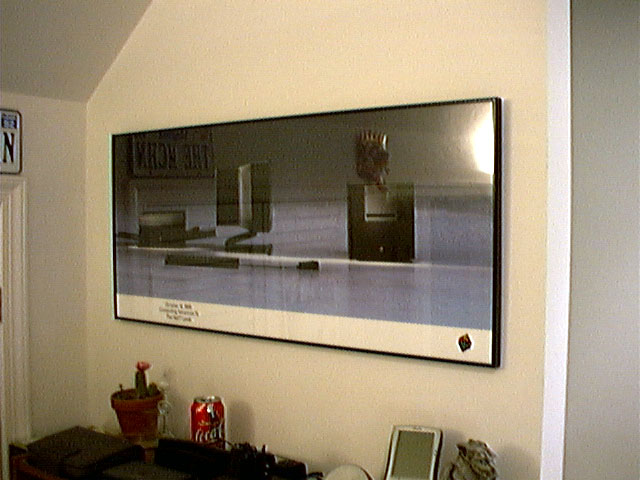 It's good someone's created a NeXT STEP site, now I can show windows users where all their ORIGINAL features that arn't stolen from Mac OS or GEM come from. surely Windows 2000 is more like NeXT STEP '88 when you look at the task bar in terms of the Dock, windows explorer in terms of the file browser, even the window widgets (close etc..) that windows has been using since '95 came out are ripped off from NeXT STEP and the Pre-emptive Multitasking and Memory protection ? well us mac owners have waited long enough for that but NeXT STEP had that too!!!

It's a shame steve didn't stay at apple and bring his NeXT STEP concepts to the Mac OS in the mid - late 80's, It would have killed windows in it's tracks if he'd also come up with an sub £1000 mac around the same time.

It's shame how these things pan out in favour of the plagiarists and thieves instead of the true innovators!
M

an interesting steve jobs quote (well i guess it's really a UNIXworld quote) from the UNIXworld November 1988 magazine article:

"If some other version of UNIX provides similar functionality, and if customers demand it, Next says it will move to whichever UNIX that might be. 'We are fundamentally nonreligious,' says Jobs. 'We will go whichever way the world does.'"

and how long have macs shipped with ONE button?

All up in your bidness

Well... it's just that lots of Mac users are religious, and they won't let Steve change their mouse because they hate that second button.

I was inspired by This guy to polish off my NeXTStation and get more use out of it. Have 128MB of SIMM's on the way to upgrade it to its max of 128MB vs. the current 32MB. The recent fiasco in trying to get a HD to boot on my Mac Plus (finally got it) has left me with some extra SCSI drives, so at need I should be able to mount another externally mounted volume.

I've got 128MB + 2GB HDD (IBM) Nice and quiet. If only I had your ROM version so I can run ADB keyboard and mouse. ARGH! *jealous!*. I will be spraypainting my Apple 2x SCSI External drive soon...muhaha..


Enjoy! I use my nextstation 95% of the time and my powerbook only when I want to browse the web at a greater speed.

I wish I'd been able to stay w/ NEXTSTEP when I was running it on a 486 66 back in '94. Still...black hardware is better. There were always driver issues. I could not get sound to work properly with either a ProAudio Spectrum 16 or a Gravis UltraSound. The NeXT's hardware architecture is quite impressive, besides. 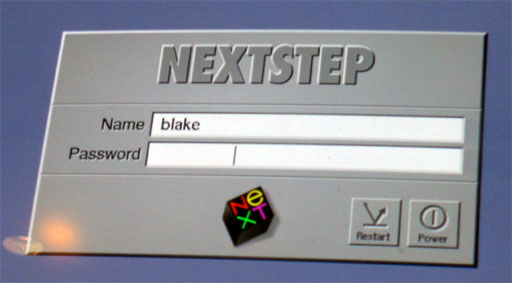 Let me know when you get the extra RAM installed. It makes a huge difference. Can't wait to have a CDROM installed on this beast. I still have my A1200 somewhere

This is the first web server in the world: