I used iFixit's teardown and teardown video as a reference to non destructively remove the outer mesh sock (3D mesh as Apple calls it) and tear the unit down to a point.

This isn't a guide, but I plan on getting around to making one with better photos in the future. (I didn't take photos of the parts iFixit already did) Nothing was wrong with this HomePod, but for those with completely dead units, I would suspect the integrated power supply has failed. Everything went back together with out a problem, but it takes a little finesse to get the "3D mesh" secured back into place at the top

1. Using a hair dryer, heat up the plastic touch surface and carefully remove it. It requires A LOT of heat and careful prying and the use of plastic guitar picks to avoid damage. You don't want to crack it since I have no idea where you can get a replacement.

2. Remove the 4 T6 screws securing the touch PCB, flip it over, pop up the ZIF retaining clip and remove the cable.

3. Remove the 2 T6 screws securing the drawstrings and undo the draw strings 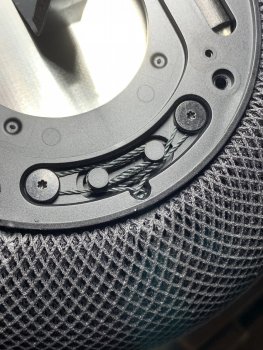 4. Remove the 4 T6 screws securing the plastic assembly in place, remove it and flip up the logic board, carefully pry up the ZIF retaining clip, remove the main cable. At this point you will see the 4" woofer below.

5. Remove the rubber screw covers and 9 T6 screws. This is where iFixit got stuck and where I got stumped trying to figure this out. Had to think about it for a few days and looked at other destructive teardowns. I tried using clamps to pull it off and twist it off with no luck. Make sure you use a hairdryer to loosen the foam adhesive securing the ribbon cable to the top cover. Again, if this is torn or damaged, I don't know where you could source a replacement from. I've indicated that area with a red square outline.

6. Heat the perimeter/joining line with a hairdryer on the hottest setting. Take your time getting it nice and hot. Don't use a heat gun as this will damage the plastics and melt the rubber surround of the woofer.

7.Using a wide flat blade screw driver with the tip wrapped in electrical tape, insert it as shown and twist to separate the top cover from the HomePod. (I didn't use tape and as a result I scuffed/marred the outer basket edge of the woofer. Thankfully it's only cosmetic damage and not something you can see when reassembled.

8. Once removed, the rest is pretty self explanatory. Six more T6 screws secure the woofer, a handful secure a plastic ring, and with that removed a metal ring unscrews 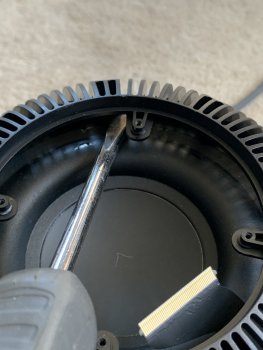 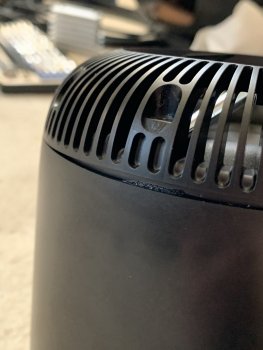 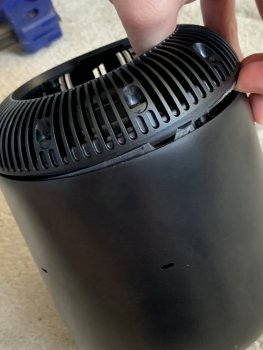 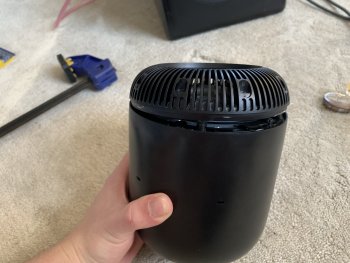 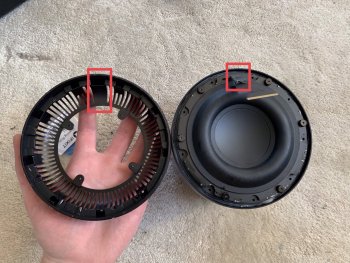 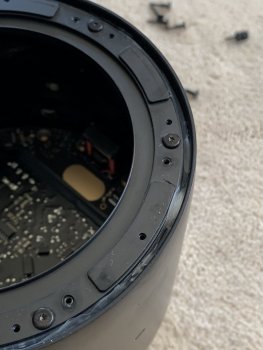 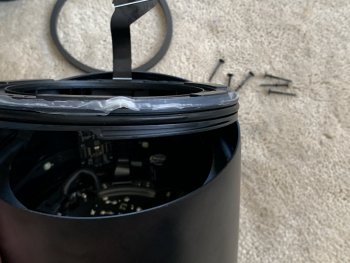 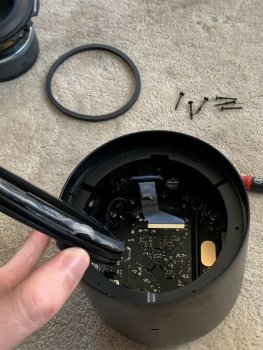 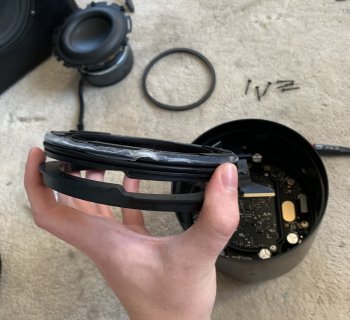 BE CAREFUL removing and installing the power supply as there is a fragile connecter (similar to the ones found in iPhones, iPads, and Macs) that need to be pressed in straight from the top, and any incorrect pressure will crack it. I've circled them in red. I don't know why Apple opted to glue the unit shut. The 9 screws hold the top plastic cover on tight enough and with the screws properly fastened, there are no vibration noises or rattles. The glue seems like an extra precaution if the screws magically vibrated loose. Everything is well built with proper gaskets to give the woofer a proper sealed and tuned enclosure. Everything is tightly packed. I was a bit surprised that iFixit's teardown "engineers" (is that a real thing?) Gave up so quickly and ran for the ultrasonic cutter destroying the HomePod's enclosure.

I do have to wonder if Apple refurbishes these or if they are even still in production. I have three of them now (One was disassembled for these photos and reassembled with out a problem) and I bought them during Best Buy's various $199 deals. All three of them came with iOS version 11.2 or what ever the initial software version was. Two of them have a manufacture date of late 2017, and one with early 2018. These units are 2+ years old and had to have been sitting in a warehouse somewhere. Not sure if they sat in BestBuy's warehouse for that long, in a warehouse in China, or an an Apple warehouse in the USA, but they aren't from any recent production.

I have to wonder if Apple is even producing these anymore or if they have a massive surplus of HomePods and plan to keep selling them until they run out (keeping enough on hand for warranty replacements) It doesn't seem economical to repair these past the removal of the top touch surface, and logic board. I would be surprised if they have a machine to soften the glue and actually disassemble these past the easier to access components. It is certainly an impressive feat of engineering, and I wish they had a 3.5mm AUX jack for people to connect other audio equipment, or at least a bluetooth pairing option. The logic board does have the same Murata WiFi/Bluetooth IC found in iPhone X and iPhone 8/8 Plus but I don't know if they have the proper bluetooth antenna hardware on the board.

It does use Bluetooth for the initial pairing setup procedure and for the handoff functionality which makes me speculate that the Bluetooth is only for very short range requiring the phone to be near HomePod. AirPlay is nice and that is what I use (I don't use Apple Music) but I would like to be able to bring HomePod to work or another location with out needing WiFi (like a remote cabin)

I'm a huge audio nerd especially with vintage audio equipment and speakers so I had to see what was inside. On passive speakers I typically take them apart and draw out the crossover as a schematic to get a better understanding of how the speaker functions.

Came from Reddit to say that's one nice tear down, I would never dare to do it with my HomePods...

Curiosity got the best of me, and I found a $25 BestBuy Giftcard so $175, I figured I’d give it a shot. Wouldn’t even have bought one at $349 or even $299. Always like taking stuff apart, especially audio equipment. Hopefully this helps anyone with a broken one if they want to troubleshoot.
Reactions: MrUNIMOG and citrusui

You’re a lot braver than I am for a perfectly functioning unit lol. Regardless, nice work ?

Wow, it's amazing how much it looks like the second gen Mac Pro once you take off the cloth covering.
Reactions: boswald and ouimetnick
T

Thanks for the guide, I followed it all, this was tough and my nails are crying for mercy. Glad I did this on a nonfunctional unit. Now time to try and get it working!

I bought a HomePod that was priced due to a software update gone wrong, so I took it apart (also have a HomePod that I haven’t put the 3D mesh back on just so I can take it apart easily if necessary.

When removing the top, insert the screw driver over the 6 screws that secure the woofer in place. This way you only scratch/scuff the screw head and not the woofer it’s self. See the photos for the woofer on the left (scuffed screws) vs the one on the right (scuffed speaker basket)

I also got my trusty DATS V2 (Dayton Audio Test System) running to measure the Thiele/Small Parameters of the woofer and tweeters. I tested both woofers and 3 tweeters. The woofers were extremely close, but the tweeters seemed to vary. I’m not sure if they actually varied as much as it shows, or if my DATS V2 isn’t accurate testing those Balanced Mode Radiator (BMR) tweeters.

I plan to take more photos showing how to remove the tweeters. Removing the 3 screws securing them to the bottom of the housing isn't enough. There is a retaining ring that unscrews counter clockwise, but you have to push 3 locking tabs (all at the same time) as you unscrew the retaining ring. It takes a bit of creativity to do, but you can't unscrew it enough because it bumps into the low frequency calibration microphone board.You have to disconnect the 3 cables on this board, heat up the backside with a hair dryer and remove this board just to have enough clearance to unscrew the retaining ring enough.

I also tested out the HomePod Mini's tiny speaker driver.