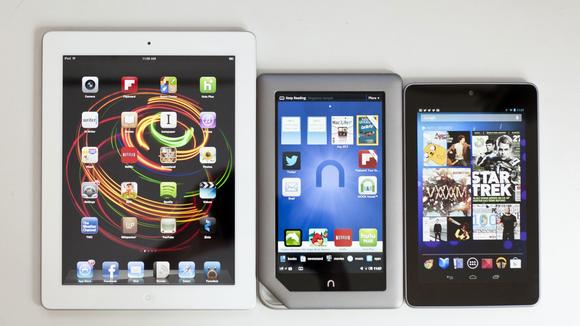 Barnes & Noble may be readying a Windows 8-powered Nook Tablet 2Related stories
We heard rumblings earlier this year that Microsoft and Barnes & Noble were teaming for a new tablet.
Wednesday, reports of a Nook Tablet 2 made the rounds, and alluded to a more powerful device set to be unveiled this fall.
Now we've learned this successor to the Nook Tablet may be a Windows 8 device, and that Barnes & Noble may unveil this Nook Tablet 2 formally later this month.
Coupled with the recent price reductions current Nook devices have seen, it appears B&N is about to get a lot more competitive with Amazon's Kindle Fire and Google's Nexus 7.
Stack up to Kindle Fire HD and iPad Mini?

Today's announcement of multiple new devices from Amazon, including three Kindle Fire HD models, means it just got a whole lot more difficult for a potential Nook 2 to make a splash.
Earlier rumors about the Nook 2's specs including a "incredible display" with 243 pixels per inch still leaves the device just short of the Kindle Fire HD's 254 ppi.
Little else is known about the rumored device, though there was word part of the partnership with Microsoft would incorporate Xbox Live integration somehow.
And though next week's Apple event will supposedly give us more details on the iPhone 5, the iPad Mini rumors continue to grow as well.
A second, separate Apple event where the iPad Mini will take center stage is rumored to be scheduled for October.
That's yet another tablet device Barnes & Noble will have to contend with should these rumors actually pan out.

That sounds great! I'm planning on buying a tablet in mid-November and its looking like there will be some good options around the $200 price point.

That would be a good move for the Nook, provided the licensing fees don't push it out of its target audience price point.
N