Numbers is changing string constants on its own!

I'm using Apple Numbers to compile raw data into a markup language. I've discovered that Numbers is changing certain characters in string constants in my formulas when I go to edit them. I needed to change

After editing the formula, I discovered it is now:

This looks almost the same, but the minus signs have been changed into en-dashes! As I'm generating essentially program code, this won't work. Grrr!!!

It looks like the change happens when the formula is brought into the editing window. It also looks like strings shorter than some length stay unchanged. So I have a workaround of coding each dash as a single character string:

BTW, I also observed a "/" in a longer string get changed into a divide sign.
A

Have a look in system preferences > keyboard > auto correct

There might be an option that turns two hyphens into a long dash - typographically correct, but no good for spreadsheets!
C

I have everything like that turned off. No substitutions, no smart quotes, nothing!

Besides, the problem doesn't happen when typing. I can type in what I want and it will take it just fine. The formula will be working correctly for a long time. But when I double click to edit the formula, it gets changed on me.
A

How about this option?

(Sorry if you've done this... I don't use Numbers or excel much!) 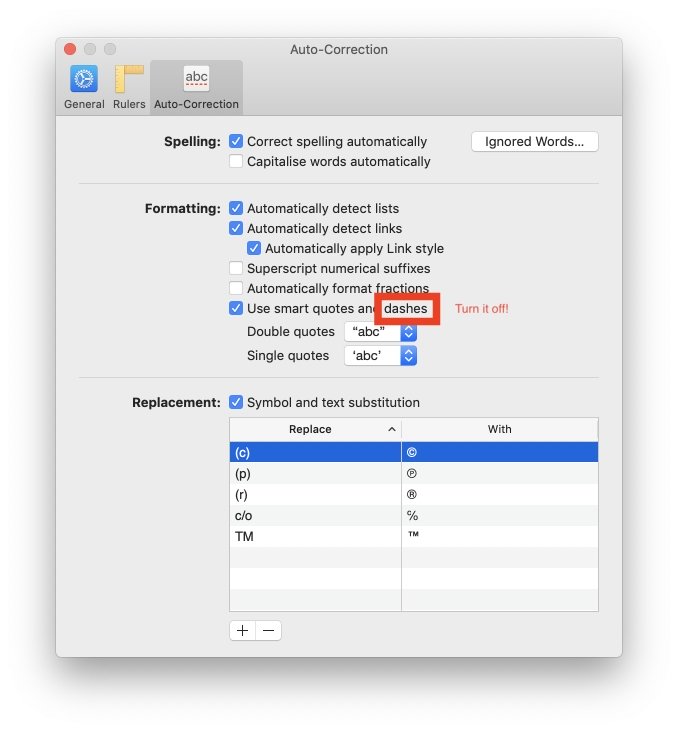 I have every single one of those options turned off! I'm old school - back in 1984 if you wanted any special characters, you had to type them yourself. So that's what I'm accustomed to doing.
A