O2 has become the second British carrier alongside EE to announce high-speed 4G services, which are due to be launched at the end of the month. The rollout, which will initially cover London, Leeds and Bradford, will start on August 29, with a further 10 cities due to be added by the end of the year. 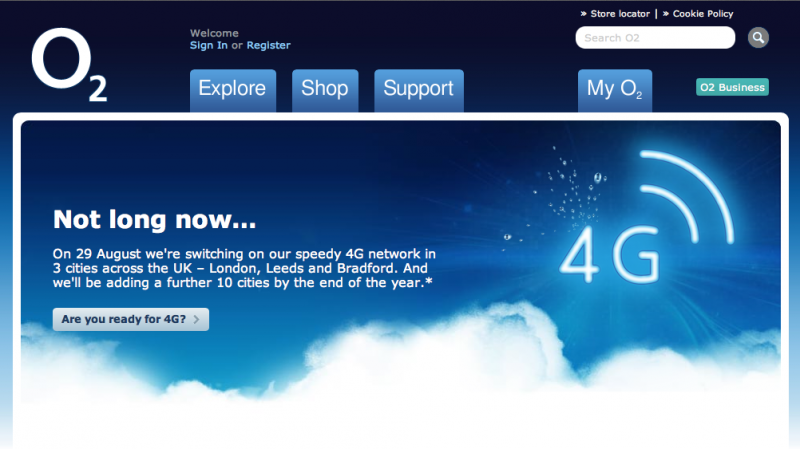 4G price plans will start from around £26 ($39) a month and O2 is already offering several 4G-enabled phones, including the Samsung Galaxy S4, the HTC One and the Blackberry Z10. As O2 has snapped up the 800 MHz spectrum, the new network will not be compatible with the iPhone 5, as the device operates on different spectrums. However, the CEO of Telefónica UK (the parent company of O2), told the BBC that he "would be frankly gobsmacked if their [Apple] roadmap didn't address that issue", suggesting that future models will support the new network.

Due to issues with Ofcom, the UK telecommunications regulator, and the delayed switch-off of the old analog television networks (the new 4G networks now operate within these frequencies), the rollout of faster LTE networks in the UK has been plagued with delays. EE, a joint subsidiary between Orange S.A. and Deutsche Telekom, was the first to roll out 4G networks back in August 2012, and its network already covers most of the UK's major towns and cities, with improvements being made daily.

EE has stated that by the end of 2014 its network will cover up to 98% of the UK population (around 62 million people). The 4G auction back in February 2013, which raised around £2.3 billion ($3.5 billion) for the UK government, awarded spectrum for 4G services to the four major UK carriers plus BT, one of the largest telecommunications operators in the UK. Both Vodafone and 3, two other British carriers, have yet launch their 4G networks, although Vodafone expects its network to go online "later this year", which may well coincide with an Apple iPhone announcement expected around September.

Shame theres a damned circe of zero signal smack bang over my village...What am I paying for?

The great thing about 4G on 800Mhz is that we should be able to expect not just better speeds, but better coverage - especially in rural areas - than with O2's existing 3G network, which mostly operates at 2100 Mhz.

How can the telecom market work so well in Europe, yet so poorly in Canada?

Hopefully the iPhone 5S supports allllllll the spectrums so I can use it on any network, not just the evil ones.

Corrode said:
How can the telecom market work so well in Europe, yet so poorly in Canada?
Click to expand...

As I understand it, Canadian regulations which restrict foreign investment in telecommunications companies have also played a role, by making it harder for new entrants to raise capital to build out their networks.
Last edited: Aug 1, 2013

So now when British government minions sue Apple for not offering "the right kind" of 4G/LTE in iPads, they'll actually have 4G networks?
T

I wonder why Bradford is one of the first 3 cities to get it.
A

John.B said:
So now when British government minions sue Apple for not offering "the right kind" of 4G/LTE in iPads, they'll actually have 4G networks?
Click to expand...

The ASA is nothing to do with the British government nor is it a legal body. It is the advertising industry's own system of voluntary self regulation.

I moved away from O2 cause of their insane pricing and lack of 3G in any local town...... Switched to EE where I get more than double everything including 1.75GB data all for less than half of what I was paying O2. (And 3G in most places!)

Best move I made in years.

S. Jobs said:
I was one of the people who complained to the UK ASA about what Apple did, they marketed the iPad as being "Wifi + 4G" when we didn't even have any 4G infrastructure, talk about misleading!
Click to expand...

You're preference would've been an additional set of iPad SKUs for the UK with only 3G? :shakeshead:


S. Jobs said:
Proudly have my letter from the ASA still ...
Click to expand...

Your mum must be proud.

As a point of fact, those iPads did support 4G/LTE, regardless of the sad state of Blighty's LTE rollout. I guess the Lake Woebegon effect is a worldwide phenomenon.
K

I really hope 4g does offer better coverage. 3G is generally fast enough (obviously more speed is always better tho) but over half the time I'm stuck on 2g.
T

Interesting choice of 3 launch areas I must say.

Also beginning to dislike the '98% of the population' quote. A slimy way to get around covering a lot of the countryside where no one lives.
J

As an iPhone user here in blighty, I think it's idiotic to say apple misled over 4G. A
Combination over government ineptitude, orange (EE) over pricing and 02's laughable coverage (two cities - Bradford is effectively Leeds) and its no wonder we have a lack of 4G/LTE system.
T

John.B said:
As a point of fact, those iPads did support 4G/LTE, regardless of the sad state of Blighty's LTE rollout.
Click to expand...

You are completely missing the point.

The problem was not the lack of 4G/LTE in the UK at the time those iPads were sold. Maybe the guy you were replying to expected the ghost of Jobs to erect a 4G mast in his village, but that's not why the ASA upheld the complaints.

The problem was that those iPad models are never going to work with 4G/LTE in the UK because they can only use the North American 4G/LTE frequencies. Plans for UK 4G/LTE networks were well advanced at the time and were due to launch well within the useful life of an new iPad - Apple knew damn well that the iPad wouldn't work with those services, yet they went ahead and sold it as the "iPad 4G".

If you are a lucky resident of London, Leeds or Bradford (or if you live in an area that has had 4G coverage from EE for some months now) you might reasonably expect the "iPad 4G" you paid £600+ for a year ago to work with the new service. It won't. That is not cool (fortunately the media picked up on it fairly quickly so not too many people will have been fooled).

You're preference would've been an additional set of iPad SKUs for the UK with only 3G? :shakeshead:
Click to expand...

No. An "iPad 4G" that actually supported the 4G frequencies that had already been chosen virtually everywhere outside North America would have been best - even if UK folk had to wait 6 months before they could use it.

Failing that, not plastering "4G" in large friendly letters over the packaging and advertising would have been an improvement (it was all localised for the target countries anyway, so there's no excuse for not).

My 3D TV supports 3D, whether or not there is any content available.

Same thing for the upcoming (and poorly named) 4K TVs. Maybe you can lodge a complaint that they can't be called 4K TVs in the UK since the BBC isn't providing any 4K content (and may never)?
B

With not living in a built up area, I noticed a massive difference when O2 started rolling out their 3G service @ 900MHz. Hopefully it'll be a similarly pleasant experience when they get to launching 4G here... in the middle of nowhere pretty much - it'll only take another 10 years or so

Oh and for those wondering, Leeds is the home of a very large O2 complex (not quite head office though). They also started their 3G900 rollout in Leeds too a few years back - and I'm guessing Bradford because it's so damned close.

So, the slower 800MHz band, poorer in built up areas and not iP5 compatible. Nice work O2. I switched to EE last year for a potential 4G contract but their coverage in Central London barely gets above Edge and 4G is exceptionally patchy.

I think I'll be holding out for Vodafone's launch next year

Finally! Was beginning to think it would never arrive!

thechungster said:
I wonder why Bradford is one of the first 3 cities to get it.
Click to expand...

Because O2 has corporate offices in both Slough (which for American readers is a pretty little village just west of London) and Leeds. And for all intents and purposes Leeds/Bradford is one city...

I know this because they pay me.

bassanoclapper said:
So, the slower 800MHz band, poorer in built up areas and not iP5 compatible. Nice work O2. I switched to EE last year for a potential 4G contract but their coverage in Central London barely gets above Edge and 4G is exceptionally patchy.
Click to expand...

Exactly the same here. And EE is even worse once you get outside of London (at least pretty much anywhere on my commute home and in my home town. No signal at all at home).

I've been thinking of paying off the last year of my EE contract and moving back to O2 which, even on 3G, was much better (although not perfect).

Will hold off now and see what the new spectrum is like, and whether the iPhone 5S supports it.
A

didnt knew there was a british carrier offering 4G, well, it's a good move, but it'd would take the carrier atleast 1.5 yrs to spread their LTE network in the major markets.

Probably not the reception they were hoping for...

Ofcom: Many Britons have no plans to use 4G.

According to Ofcom, over half of all people in the UK own a smartphone and their research found that 22% of people with smartphones strongly disagree that they will sign up to 4G in the future.

Almost two thirds of smartphone users are unsure about upgrading, or are unlikely to upgrade in the coming year, Ofcom said in its 2013 Communications Market Report.
Click to expand...

I think the speed of take-up is going to governed by the cost. If the mobile operators treat it as a premium service it's probably going to struggle at first but if one of the operators takes a gamble with similar tariffs to the existing 3G services, then it could be a hit.
You must log in or register to reply here.
Share:
Facebook Twitter Reddit Email Share Link
Register on MacRumors! This sidebar will go away, and you'll see fewer ads.
Sign Up
Top Bottom