Old school beat-'em-up street-fighting arcade app. What kind of ninja are you?

The notorious Dragon crime family has engulfed your city with its evil power. The only hope in this martial arts, beat-'em-up, stick-fighting tour-de-force is for you to master a challenging assortment of awesome combo moves. Embrace the soul of the great warrior to stick it to 'em and save your city!

Get Ultimate Stick Fight in the App Store: https://itunes.apple.com/us/app/ultimate-stick-fight/id566534942?mt=8


TWO HEROES, ENDLESS COMBINATIONS:
 Play as Ryan or Slash, one uses a sword and the other his bare sticks
 Each player must master his own 20 fight moves and styles
 Learn insane combos that punch, kick, juggle, slide, spin, and more
 String together built-in combos to create incredible attack combinations
 Pick up and throw objects like boxes, dumpsters and phone booths!

FEATURES:
 Overcome challenging bosses in 40 stages and 8 unique environments
 3 levels of difficulty to prove you've got the biggest stick in town
 Earn coins and stars as you defeat your enemies
 Purchase new combos or upgrade existing skills to unlock new moves
 Upgrade your skills for new animations and more effective combos 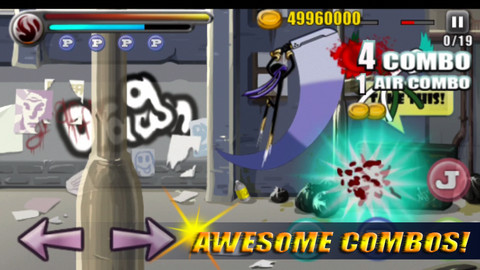 Guys, check out the short gameplay with one of the game`s characters, Slash! My fav one, he also uses a machete and a gun:

Get the codes to try the game for free and share what you think of it!

If you want more, just PM me.
I

Thanks for the promo code!

Generally I don't play games with fights and blood, but this one turned to be quite nice and active! Btw, the YouTube video pushed me to trying the app
G

Unfortunately couldn't use the promo code, so I've paid 99 cents and installed the game. As for me, I like the action and the story, don't regret about buying the app. Now will keep improving my skills in fighting
P

thanks for the feedback, guys!

App ran smoothly? Would you change a thing in it?

Check out the gameplay if you still doubt whether to grab it or not:
http://www.youtube.com/watch?v=_J-yNBSneyE
Last edited: Jun 19, 2013
B

thanks.don't regret about buying the app. Now will keep improving my skills in fighting

Yes, it runs smoothly. I like the mood - you managed to recreate it. I guess it will be the app of the week (together with Dead Ahead)
Still, the music turns to be a bit tiring in some time - I just turn the sound off
You must log in or register to reply here.
Share:
Facebook Twitter Reddit Email Share Link
Register on MacRumors! This sidebar will go away, and you'll see fewer ads.
Sign Up
Top Bottom