One of my sons is contemplating buying a digital camera he can use while diving.

After looking around the net, I think this Olympus would be his best buy. I can get it from the Apple Store (Ireland) with a 256mb card for 399 less a 36 voucher which would make it 363.

We could then look around for the best price on the Underwater Housing.

Would welcome comments from anyone who has used this camera or who has any other recommendations.

How is its shutter lag?


I've been diving with a 35mm Nikonos V system for the past decade, and last winter, we put my wife's P&S (Canon A80) into a housing to do some snorkeling. The shutter lag drove me absolutely insane.

"From power-on to first shot captured took 3.5 seconds, quick enough to capture many unposed spontaneous moments, but you will miss some. Shutter delay, the elapsed time between releasing the shutter and capturing the image, measured a respectable 2/10 second when pre-focused, or 9/10 second including autofocus time. Shot-to-shot took just under 2 seconds. In high-speed continuous shooting mode, the A80 captured four images in 1.5 seconds"
steves-digicams

The Olympus seems to be better than the Canon, doesn't it? I suppose improved shutter lag would make a big difference when shooting underwater. Never thought of that, I'm only a very amateur photographer so knowing any more things like that would be useful.

Man, I have been lusting after that Olympus 720 SW for awhile. If you're going to do some snorkelling, you may not even need the housing, which would be quite amazing.
R

I thought the waterproof down to 10' with no housing would be great for my son, as we live right on the beach and he takes his boat out after work every night to check his lobster pots and he's always been a bit hesitant about taking a camera with him. This one he could carry along and not have to worry about it getting an occasional soaking.

Would be good too, for beach pics of the grandkids as you wouldn't have to be paranoid about them splashing it. Presumably the sand shouldn't be a problem either.

I've got one of these (not the separate underwater housing, though), and it is FUN in the pool! I had bought it to use at the pool and also for when I go to the beach.... The first time I took it to the pool, it felt scary to actually dip it in the water, but then I quickly got used to submerging it and shooting both in and out of the water.

One thing I really wish that they'd included is a viewfinder. Sometimes the LCD is hard to see in the bright sunlight. Images come out nice and clear, good color, sharp and crisp.... The camera feels nice in the hand, too, and there is an included wrist strap so that you've got something to hang on to either in the water or out of it. The camera is supposed to be impervious to shock, too -- I gasped aloud when Chip, showing me the demo model at the store, casually dropped it from standing height to the floor. Didn't bother the camera a bit! Yes, it is well-sealed so that it is impervious to water and presumably sand as well, although I'd be cautious about changing the battery or swapping out the xD card while sitting right in the sand. The battery has pretty good longevity, but I did buy an additional battery anyway as a matter of course, and I bought a couple of xD cards, 512 MB and 1 GB. This camera is 7.1 MP, so your file sizes are going to be medium-large, something to keep in mind, especially if you shoot at the highest quality. I would recommend at least a 512 MB card rather than a 256 MB......

It would be a fun camera for your son to take out on the boat, and unless he's doing some major deep-sea diving, he really wouldn't need the accessory underwater housing.

Thanks Clix Pix, it's great to hear from someone who has one and is happy with it. The pics look great.

He will want the underwater housing eventually as he goes diving at well over 10' depths regularly, but he might put off buying it for a while as they're expecting their 2nd child in 7 weeks and are also building a house, so money's a bit tight at the moment. His wife wasn't totally convinced this camera was really necessary but she's coming around. She'll get to keep the old one at home all the time for the baby pics.

Good to hear too, that it's so shockproof as well, as he can be a bit rough with things at times. I don't think I'll tell him to try the dropping to the floor trick, though.

Wouldn't dream of opening anything at the beach. When I take mine down, I wrap it well in a clean cloth and seal it in a zip-loc bag. It gets taken out for a few pics and then is promptly returned to the cloth and bag, which aren't allowed to come in contact with the sand. Sand can migrate through microscopic openings, I've found.

The Olympus seems to be better than the Canon, doesn't it?
Click to expand...

Its clearly better. Just another area where technology has progressed (the A80 is an "old" digital camera by today's standards).


I suppose improved shutter lag would make a big difference when shooting underwater. Never thought of that..
Click to expand...

Its one of those things that can bite you when you least want it to, particularly on keeping faster-moving fish, turtles, pelagics, etc... properly centered in frame.

Even with a 'lag-free' camera, its not necessarily easy...I just cut off his tail flippers. 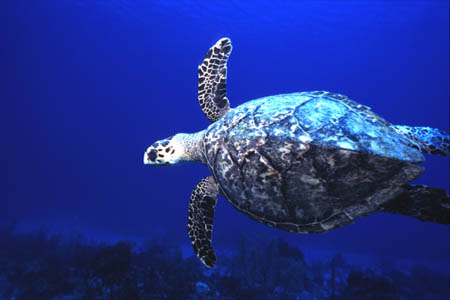