Is it time for a change here? If Apple is after sleek and simple, then why two systems? Is there really an advantage to this? Is there any reason why this would be a bad idea or could not be implemented?

Right now buyers have to choose between operating systems when considering the purchase of a device. Don't think that is a good thing.
Reactions: boston04and07 and josephkrishna

If you're suggesting that Apple should follow MicroSlop's lead with "one Windows" for all devices...keep in mind that hasn't worked out all that well for Microsoft.

You either want a computer, or you want a tablet. The only thing that confuses customers is that they want to believe that a $500 iPad is going to be as good as a MacBook as long as they get a keyboard for it.

You cannot unify both things without causing problems for both parties.
A

It comes down to user interface, not the product name or code base of the OS. One might as well ask, "Why aren't a motorcycle's operating controls the same as a car's?"

The realities of touch screen vs. keyboard/mouse/trackpad and larger screen vs. smaller screen drive this. Each interface method is sufficiently different that each deserves (nay, demands) an optimized experience. I wouldn't be surprised if, at some point, Siri is considered/branded an OS in its own right - speech-optimized control.

What good is the "efficiency" of having a one-size-fits-all OS, if the result is that nobody gets a good fit?

Then there's product identification/branding. When Microsoft insists on putting the Windows brand on everything, one of the messages is, "When you're using a smart phone or tablet, you're using a computer." There's a huge segment of the population for whom this is an utter turn-off. "I don't want a computer in my pocket, I hate computers!"

I get it, there are Mac users out there who wish that they had nothing to re-learn when they pick up an iPhone or iPad for the first time. There are Mac users who wish they had the depth and breadth of features and under-the-hood controls for iOS that they're used to with Mac. And they're grossly outnumbered by people who would hate any attempt to make their iPhones and iPads more Mac-like. The more likely impact of unification would be the simplification of OS X, to make it more accessible to the masses. Is that what any Mac user wants?

It's also true that there's cross-platform unification going on anyway, such as the multi-touch gestures on trackpads and MagicMouse. There's the "your data everywhere" unification of iCloud, apps of the same name and file format on both platforms... But equivalency does not require carbon-copy duplication - it requires consistency of terminology and functional equivalence, when functionality overlaps. And otherwise? Vive le difference!
Reactions: Mcmeowmers
L

carlgo said:
Is it time for a change here? If Apple is after sleek and simple, then why two systems? Is there really an advantage to this? Is there any reason why this would be a bad idea or could not be implemented?

Right now buyers have to choose between operating systems when considering the purchase of a device. Don't think that is a good thing.
Click to expand...

The OS has been the same from the start. The only difference is the user-facing UI front-end.

No change needed, the underneath bits you can't see are shared between iOS and OS X. On a high level Apple got it right and used a different UI for mobile and computing devices, unlike Microsoft with their incoherent and confusing OS strategy of a few years ago.

/awaits the Yosemite haters whining about something they apparently call lag...
N

carlgo said:
Is it time for a change here? If Apple is after sleek and simple, then why two systems? Is there really an advantage to this? Is there any reason why this would be a bad idea or could not be implemented?

Right now buyers have to choose between operating systems when considering the purchase of a device. Don't think that is a good thing.
Click to expand...

Don't really understand your thought process. They buyer never makes the choice of operating system you chose the device type and you get the operating system that supports it.
Reactions: warden

MagicBoy said:
No change needed  On a high level Apple got it right and used a different UI for mobile and computing devices
Click to expand...

The development and release of Yosemite destroyed my confidence in the ability of Apple to do the right things with UI/UX.

the 'one size fits all' design of Yosemite squeezes some things in a way that might be welcome on the smallest notebook. I doubt that the squeezing is universally appreciated by users of large displays.

Thread spun off from a topic about Apple becoming boring:


maxsix said:
… Most unsettling, yet not surprising, is how fast Apple is blending iOS and OS X together. It's completely contrary to posts from so many in the past that said it wasn't going to happen. Making a mashup of the two dilutes the goodness that was OS X.

No matter the specifics, the overall impression is they are dumbing down OS X. …
Click to expand...

grahamperrin said:
… I shouldn't describe the changes of direction as completely contrary to past statements by Apple. I'll revisit that …
Click to expand...

From one of the linked articles – Jason Snell quoting Craig Federighi, Snell's emphasis:


… "You don’t want to say the Mac became less good at being a Mac because someone tried to turn it into iOS. At the same time, you don’t want to feel like iOS was designed by [one] company and Mac was designed by [a different] company, and they’re different for reasons of lack of common vision. We have a common sense of aesthetics, a common set of principles that drive us, and we’re building the best products we can for their unique purposes. So you’ll see them be the same where that makes sense, and you’ll see them be different in those things that are critical to their essence.” …​


grahamperrin said:
… the difference in size between the smallest notebook (around eight inches high when open) and the largest iMac (more than twenty inches). Apple also sells a 32" display …
Click to expand...

An Apple vision – the hardware – four (not five) classes of device (and zero attention to the required diversity of software): 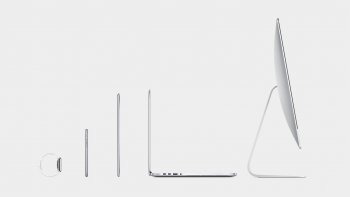 – adapted (flipped horizontally) from https://twitter.com/noCreativity/status/590517012721438721​
"Read it and weep. This is what
flat design has brought to the table:
White uniformity with no delight at all."​
Also from the topic about Apple becoming boring, an interpretation of how Apple wishes to portray things:


"… 3. seamlessness in combined use of three operating systems – not limited to those four classes of device."​
More specifically, in some (not all) of its recent PR, Apple states:


maxsix said:
I like Apple a lot. I've seriously invested in the ecosystem, plus we use the platform (OS X) at work. I'll be the first to admit as a dedicated power user (that's not boasting, just fact) that I'm very business oriented and make my living computing, not playing. That's why I may be overly harsh when forming an opinion on the influence and incorporation of iOS "features" into OS X.
Click to expand...

James83448 said:
Developing on iOS would be a ballache and I can't imagine Apple giving it's developers Microsoft machines to develop for iOS
Click to expand...

Why would they need Microsoft machines????

James83448 said:
If they stop developing OS X and unify OS X with iOS then developing on it would be a pain
Click to expand...

Why? I think it would be easier not harder.
J

Bending Pixels said:
If you're suggesting that Apple should follow MicroSlop's lead with "one Windows" for all devices...keep in mind that hasn't worked out all that well for Microsoft.
Click to expand...

This says it all and is why I abandoned Windows for OS X for personal use. Granted, all the security holes and constant stream of patches had a lot to do with it also. I look at it as the "dumbing down" of the user interface / OS to parallel what is happening to society in general. It is shifting from content creation to content consumption.

I think the rumors surrounding convergence has to do with the iPad Pro and to a lesser extent the iPad Air. The idea being: what's the point of iOS on a large screen? I think most people agree that OS X on an iPhone 6 or 6+ would be stupid, just as iOS on a iMac would be equally stupid. But, at what point does the cross over occur?

Basically, I think the desire for convergence is more of wondering 'Wouldn't it be nice if there was a 10 - 13 inch Apple Product that doubled as both iOS and OS X?' Because, a 13 inch iPad doesn't seem very functional while a 13 MB seems overkill.

I don't think anyone wants unified UI like
Windows did, we all know that ended up mostly bad. But to have the same back end, meaning the same apps could be used on both devices, yet with different UI/UX. You could just use iOS apps with flexible UIs (like they have to go on all the different screen sizes) and run them as windowed apps on the desktop. You could then have the best of both worlds - the great App Store ecosystem on iOS and the superior use of a desktop computer for doing work.

I think it would be very nice if they at least made it easier for apps developed for iOS to be converted to be compatible with mac OS. The Mac App Store is quite sad in comparison to the iOS app store, and I'm sick of having to turn to my 5" screen to use an iOS-only app that could perfectly well run on my 15" MacBook Pro.
You must log in or register to reply here.
Share:
Facebook Twitter Reddit Email Share Link
Register on MacRumors! This sidebar will go away, and you'll see fewer ads.
Sign Up
Top Bottom