Junecloud this week announced that its popular package tracking app Deliveries will be switching to a paid subscription model on September 30. A subscription will unlock all features of the app across the iPhone, iPad, Mac, and Apple Watch, with pricing to be set at 99 cents per month or $4.99 per year through the App Store. 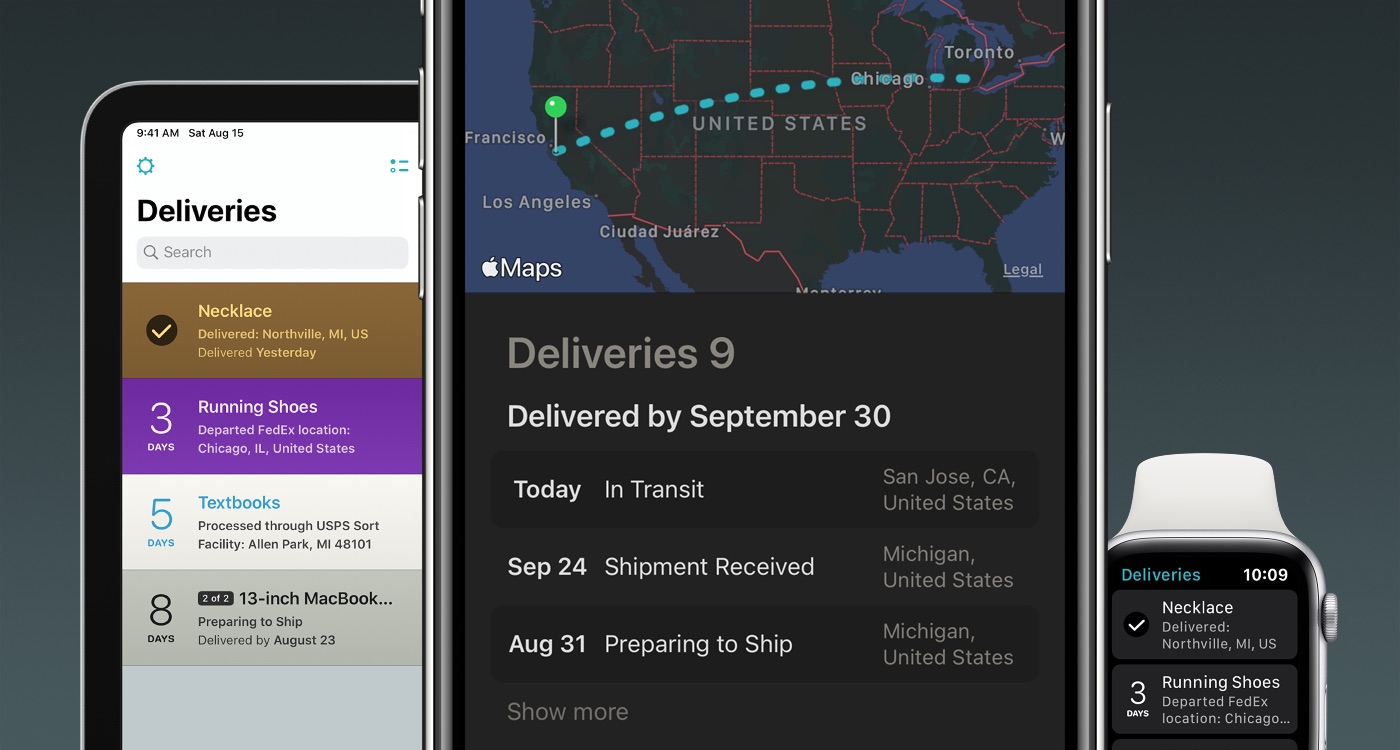 Deliveries until now has been a one-time purchase, with iOS and macOS versions of the app each costing $4.99. Junecloud says users who already purchased the app can continue using most features without a subscription, and they will also receive a complimentary subscription for up to 18 months from the purchase date. Users who bought the app more than 18 months ago will receive a complimentary subscription until February 1, 2021.

Junecloud hopes that switching to a subscription model will attract a wider customer base:

We have so many wonderful customers, but most people have never tried Deliveries. We know a big part of that has always been the upfront cost: the current price of $4.99 for the iOS app and $4.99 for the Mac app is a lot to ask before you’ve even had a chance to figure out if it does what you want it to do. Subscriptions will make it possible to download the app on all your devices and try it for a month, or even a full year, for less than it would have cost to buy both versions.
Click to expand...

Deliveries makes it easy to track packages from UPS, FedEx, DHL, USPS, Canada Post, and many other couriers, complete with push notifications and more. The app is also useful for tracking orders from companies like Apple and Amazon.

The switch to a paid subscription model will coincide with the release of version 9.0 of Deliveries, a major update with many new features, including Dark Mode support on iOS, expanded tracking history, faster methods of adding shipments, and more.

Perhaps, anyone who's going to be ordering a new iPhone should be downloading this app. Does anyone know how accurate it is?
T

Annoying. I’ve been using this for years. Time to look at alternatives.
Reactions: thirdeyeopen666, Craiguyver, rick3000 and 49 others

MacRumors said:
Users who bought the app more than 18 months ago will receive a complimentary subscription until February 1, 2021.
Click to expand...

Well it sure is nice of them to give us until Feb 1 to find another app to use.
Reactions: SaddleSC, Jayayess1190, Craiguyver and 28 others
M

I LOVE THIS APP!

I have all the versions and its worth every penny IMO.

(except the last time the apple watch app kinda sucked since it would have to resync all the deliveries from the last time you used the watch app. and if you had a lot of deliveries it took too long) I hope they fix that soon. if not already.
Reactions: Trip Mitchell, minik and Theyayarealivin
C

Who on earth needs this? All this info is FREE on the web
Reactions: titans1127, Zen_Arcade, amartinez1660 and 33 others
M

I have a free version of this. It's called an email address.
Reactions: Jayayess1190, osx86, Lazy and 37 others

All these subscriptions need to END. The only thing I would ever subscribe to are services that I can CONSUME and keep adding new CONTENT to CONSUME. My currency app now asks for a subscription and I am like WHY. It literally has not changed since 2014 or something besides adding annoying ads. Give me a break.
Reactions: osx86, jdsingle, Volk.JP and 40 others
M

calstanford said:
Who on earth needs this? All this info is FREE on the web
Click to expand...

Its much more convient to use an app if once gets 5-10 packages a week like I do.

at a glance you see what and when things will show up.
Reactions: cylack, szw-mapple fan, ZZ9pluralZalpha and 7 others
C

Yes it works great and never has limited the number of orders. Just wish they would get a widget. Even if it is only $4.99 a year, why would I pay if I have a fine free option, and $4.99 or whatever price multiplies by everything having subs anymore becomes a lot.

And I check status a lot, and Shop beats me with notifications most of the time.
Reactions: Jonathan7877
A

Time to find a new app to use.
Reactions: cylack and jeblis
M

macsplusmacs said:
Its much more convient to use an app if once gets 5-10 packages a week like I do.

at a glance you see what and when things will show up.
Click to expand...

I use an app. It's called mail.app. FedEx, USPS, and UPS email me directly when a package is coming to my house.
Reactions: osx86, brgjoe, jhv123 and 9 others
M

mnsportsgeek said:
I use an app. It's called mail.app. FedEx, USPS, and UPS email me directly when a package is coming to my house.
Click to expand...

Not the same. Not by a long shot.

But I am super glad you found a solution that works for you. Now hopefully you can respect that your solution does not apply to the other 7 billion people on this planet.
Reactions: SaddleSC, dcdandan, techpr and 25 others
D

I recommend Parcel. It still cost 2.99/yr but the quality of the app and the fantastic support sure worths it. Widget support as well.
Reactions: G.McGilli, MountainApple, page3 and 5 others

Just use the free app for whatever shipping company or retailer you used.

Weather radar apps that were once free are going to paid subscriptions too. A few of these I used for years, then they stripped out most of the features and said I had to pay to get them back by purchasing the Pro version. One WX app was already a Pro version which I bought, but then they stripped out some of its features and said I could get them back by purchasing "Extras". Personally I see this as the old bait and switch routine. A totally dishonest business practice. Stripping features out of a paid app then charging extra to get them back is basically theft IMO.
Reactions: phairphan, Craiguyver, cylack and 12 others

Just bought this a few months ago, as I had a couple of deliveries that I wanted to see... Haven't used it in 2 months 😅 I'm definitely not going to go for the paid plan. Hopefully the free version will work just fine for my use case 😅🤞
Reactions: hyperipod and compwiz1202

I love this app for tracking all my orders for my business. I've even created mail flow rules in Office 365 to forward emails to Junecloud to have them automatically setup. While I hate to see simple apps like this go subscription based, $5/year is chump change for the time savings it gives me, will happily pay.
Reactions: locovaca, Lazy, philosoraptor1 and 1 other person

I hate when apps switch to a subscription model...i.e. Fantastical, but I use this app multiple times a day and it's a Godsend. I will gladly pay $5 a year to keep this app afloat and innovating.
Reactions: locovaca, robfoll, geekymcfly and 4 others

If tracking deliveries was my life, then I'd have no problem subscribing.

But to track one or two deliveries once or twice a month, no mam.
Reactions: thirdeyeopen666, Lazy, tooloud10 and 12 others
C

diego.caraballo said:
I recommend Parcel. It still cost 2.99/yr but the quality of the app and the fantastic support sure worths it. Widget support as well.
Click to expand...

Yea I was excited about the widget but then got slapped with subbing when I want to track a SECOND package. Shop.app is free and has never limited. Hope they get a widget, even if it requires a low sub like Carrot.

Ive been using this app for years but i'm not paying a subscription for it.
Reactions: gr8tfly, mrwizardno2, geekymcfly and 15 others

I bought their Mac and iOS apps but I primarily use their Dashboard widget. That can only sync to Junecloud, so if that's locked behind a subscription... sigh.

This might actually be the very first software subscription I pay for, though. $5 a year is the right price. I do wish there was a lifetime subscription option though, even if it was much more.

macsplusmacs said:
I LOVE THIS APP!

I have all the versions and its worth every penny IMO.

(except the last time the apple watch app kinda sucked since it would have to resync all the deliveries from the last time you used the watch app. and if you had a lot of deliveries it took too long) I hope they fix that soon. if not already.
Click to expand...

No kidding, that's the worst. I gave up on the watch app because of that, I don't have time to watch it replay each tracking that came and went until it gets to the current ones. On the phone and mac it works great. But I will think twice before giving them my money again, I am not a fan of those that once sold the full version and then switch to subscription and want us to pay again. If at least they gave us more than 6 months or so it would be better.
Reactions: AxiomaticRubric, ModusOperandi, hyperipod and 1 other person
You must log in or register to reply here.
Share:
Facebook Twitter Reddit Email Share Link
Register on MacRumors! This sidebar will go away, and you'll see fewer ads.
Sign Up
Top Bottom