AirTags, until their official announcement earlier this month, had remained one of the most rumored Apple products of the last few years. Initial reports about an Apple item tracker began to surface in 2019, and in the entirety of the two years that followed, AirTags' release seemed to be constantly imminent. 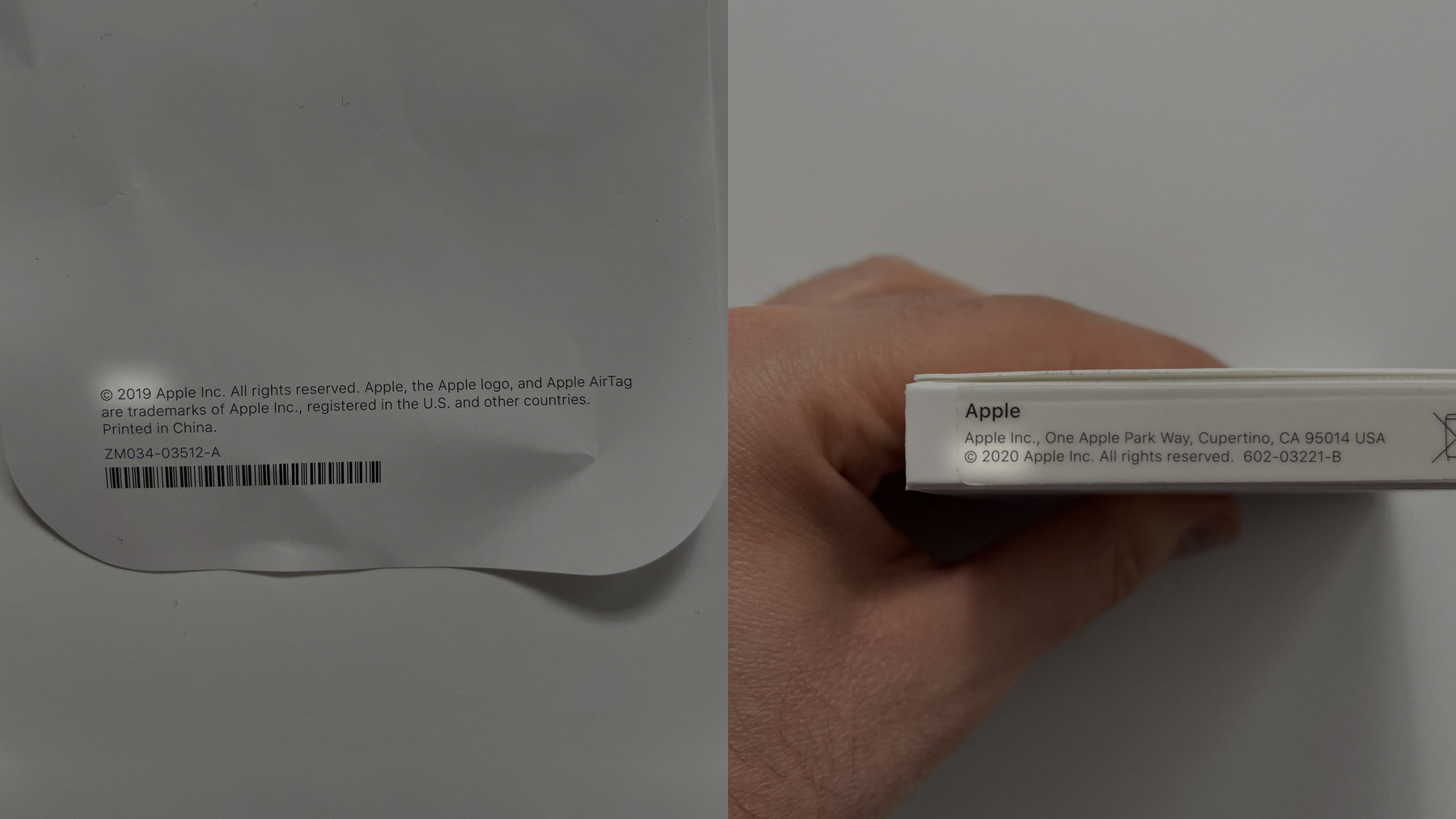 Last week, FCC filings revealed that Apple began seeking regulatory approval and certification for AirTags in 2019, with testing taking place in the second half of the year. Now, as AirTags have begun to arrive to customers worldwide, new evidence is reaffirming that AirTags have been ready to launch for a considerable amount of time.

Images of paperwork included inside the box for Apple's Keyring AirTag accessory shared on Twitter by Apple YouTuber ZONEofTECH show the year "2019" listed for regulatory and trademark purposes. However, on the AirTags box itself, the year 2020 is listed. Both writings clearly indicate that Apple could have announced and shipped AirTags as early as possibly 2019, but it was inclined not to do so until two years later.

While not for certain, Apple's decision to delay AirTags release could have been related to the scrutiny the company faced and continues to face on accusations of anti-competitive behavior from competing item-tracker maker Tile. AirTags became available for pre-order last week and cost $29 each or $99 for a pack of four.

Article Link: Packaging Reveals Apple Was Preparing to Ship AirTags as Early as 2019

If AirPower ships, the package might have a 2018 on it.
Reactions: cbaca51, BenGieCruz, LinusR and 24 others

The label on my key ring box says it has been manufactured in August 2020. 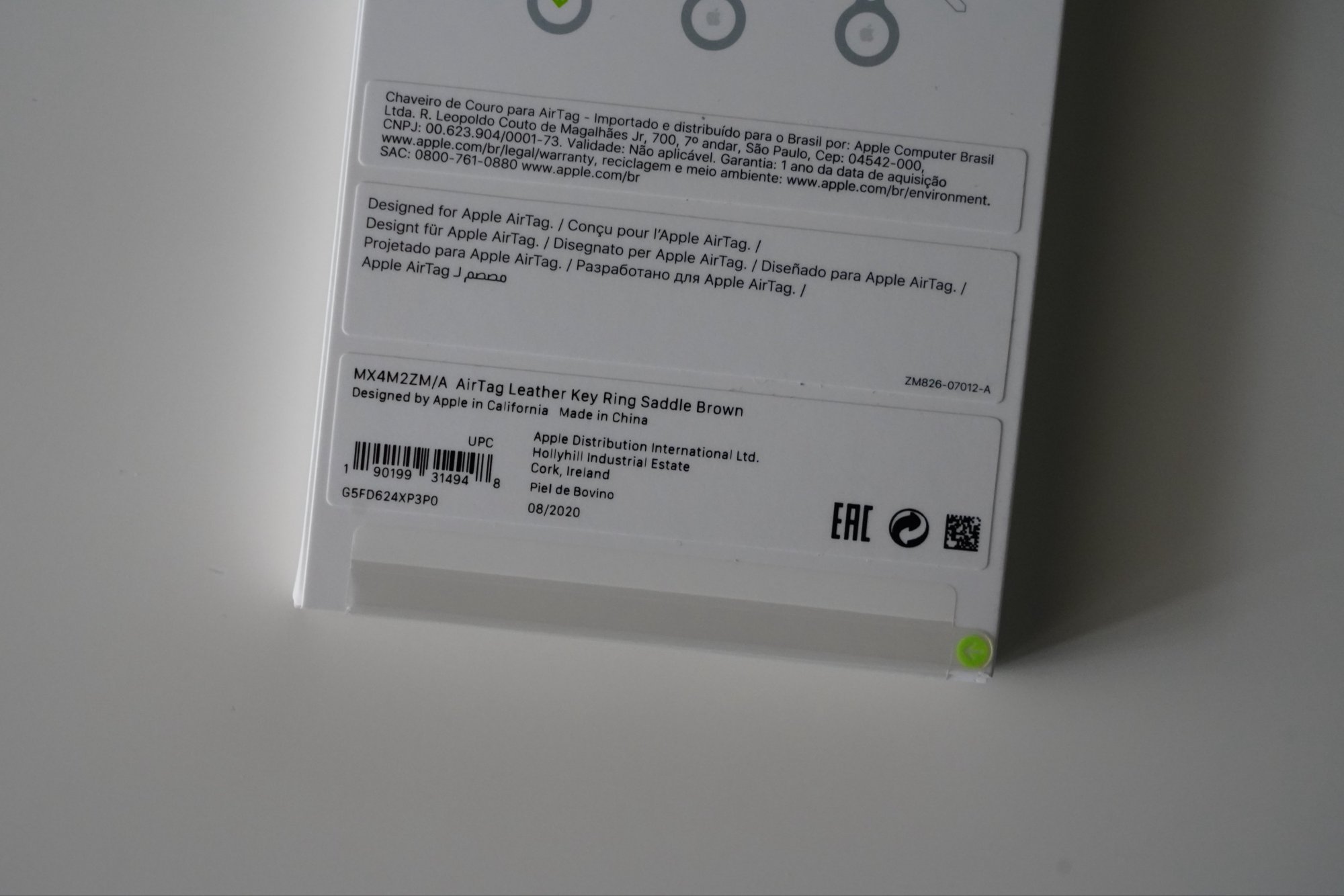 This can be confirmed in discovery of someone decides to launch a lawsuit against Apple.

I assume they were taken to court and had to build third party tracking into Find My.
Reactions: Smooch, amartinez1660, Oblivious.Robot and 5 others
G

I would like to hope the delay was over improving the support software. If it's because of lawyers... what am I saying it's always about the lawyers. Sucks.
Reactions: amartinez1660

Umm... What about waiting for Find My ecosystem to be, I would say launched but perhaps matured... Not sure it was all that sinister.

Funny yeah they Musta had all the the AirTag accessory things at another warehouse I thought I got my whole order it now I only got the AirTag holders boo-hoo even though they show both being shipped by UPS this one came by another shipper I've never heard of very strange.
N

Everyone was stuck at home. No one needed to start finding anything until now.
Reactions: TVreporter, ipedro, T-Will and 13 others

A certain version of airtags might have been ready. The scrutiny likely played some role but I wouldn’t be surprised if they waited for more U1 capable devices to be out there plus adding some new capabilities to have a stronger product at launch.
Reactions: ipedro, ApfelKuchen, SantaFeNM and 2 others

If Tile couldn't establish a large market share/good profit in the past two years that is their fault. Apple gave them a long long time in tech years.
Reactions: lostczech, haruhiko and Cigsm

kol77 said:
Umm... What about waiting for Find My ecosystem to be, I would say launched but perhaps matured... Not sure it was all that sinister.
Click to expand...

Find my has been mature for some time. It wasn't available for use by 3rd parties. It is now. MR is implying AirTags may have been delayed so that Apple could make the Find My ecosystem not a 1st party exclusive, lessening the impact of claims of anti-competitiveness.
Reactions: jhfenton
M

Wise time to put it to market when some countries feel like they can get out a little bit more. There was no pressure to bring a location based device out when no one was going anywhere.
E

That makes sense that is when the first Apple iPhone 11 had the WideBand communication in the phone.
Reactions: _Spinn_

If that's the case, why the f is it backordered all the way till June? They should have manufactured tons of them by now.
Reactions: twocents and madmin

Based on rumors at the time and code found in the iOS 13 betas, I was expecting them to be announced alongside the iPhone 11 series. My own personal guess based on everything we've seen over the last two years, AirTags were developed for release either late 2019 along side the iPhone 11 or early 2020 as a follow up accessory and somewhere close to that time the increasing antitrust scrutiny forced Apple to postpone their release and first develop third party support for the Find My network which then took the length of the iOS 14 development cycle to get in place before they felt comfortable releasing.

I'm sure we'll never hear confirmation of the real story, but to me this is all plausible and the most likely scenario.
Reactions: SantaFeNM and jhfenton
M

Interesting. It would make sense since the iPhone 11 came out in 2019 and that was the first phone to have the U1 chip. My guess is Apple intended to launch AirTags either early in 2020 or possibly with the iPhone 12 but the pandemic and/or waiting to open up the Find My network delayed the release.
Reactions: Falhófnir and SantaFeNM
N

NMBob said:
Everyone was stuck at home. No one needed to start finding anything until now.
Click to expand...

OR
Apple wanted a critical mass of UWB-equipped phones before launch...

You only get one chance to launch, and you need the general opinion at launch to be "this is magic" not "wake me in two years when it actually works".
Reactions: WLSON, rosegoldoli, NightFox and 3 others

name99 said:
OR
Apple wanted a critical mass of UWB-equipped phones before launch...

You only get one chance to launch, and you need the general opinion at launch to be "this is magic" not "wake me in two years when it actually works".
Click to expand...

I don't think Apple would be worried over Tile's lawyers.