Wasn't sure if to put the post on this forum or the iPhone's forum, but since I need watch users feedback, I've figured this is the better place.

My iPhone 6's battery life really took a hit ever since i've been pairing it to the Apple Watch.

The watch's battery is great BTW. I never go to sleep and see under 50%.

Is this data for iPhone's battery normal for watch owners? If not, what can I do?
I've tried repairing, complete restore of the watch and everything I could think of. Would love tonhear feedback from ppl here.
C

If the battery standby time is the same as usage, you definitely have a problem. My first thought was you may have a bunk app for your Watch- keep in mind there are no native Watch apps just yet, so the iPhone's battery could be taking the hit. I'd check maybe your Watch usage in the iPhone Watch app, though I'm not sure if that will help identify the problem.

Either way though, if your battery standby equals the usage, you know 100% there is something up. Not the norm at all.
K

Thanks, i've uninstalled all 3rd party apps from the watch and will give it a try.
So I understand that other owners of the apple watch don't experience the same symptoms?
L

Before I got the watch my iPhone 6+ drains less than 5% overnight with DND on. Now, it went down to 12-15%. The usage is same as before. I am assuming the BT does drain your battery pretty good.

Force close the AW companion app on the phone. It's got some sort of battery suck in it.

MY 5s actually gets slightly better battery life with the watch (due to fewer notifications going to the watch and making it light up/vibrate). Before the watch, I had to plug it in when I got home from work if I wanted to use it in the evening. Now I can go the whole day.
Z

I was using a Pebble Steel before my Apple watch, so I have had BT on all the time for a year or so. It does drain the battery a little more, but in my experience only about 5-10% per day compared to BT off. I've not seen any notable difference between battery drain pre or post Apple watch, and my usage and standby times are different, so the symptoms being described here are not an indication of a general problem.

1) Switch off both of your phone and watch.

BTW, it seems the problem is not on your watch, but the phone.
X

I was having the same problem. The issue is the bluetooth being on constantly on your iPhone causing battery drainage. So basically yes the iPhone never rests.

xRYD3Rx said:
I was having the same problem. The issue is the bluetooth being on constantly on your iPhone causing battery drainage. So basically yes the iPhone never rests.
Click to expand...

If the issue where the bluetooth being on constantly everyone with a watch would have this issue. But they're not. I'm not, and I've had my watch since 4 days after launch.
L

Does BT range distance affects the battery life? let's say the phone is upstairs in the bedroom while the watch is downstairs in another room?

xRYD3Rx said:
I was having the same problem. The issue is the bluetooth being on constantly on your iPhone causing battery drainage. So basically yes the iPhone never rests.
Click to expand...

I don't think so. There are plenty of iPhones and 3 watches in my family. The BT on my 6+ almost aways off before I order the watch. After I order it, I intentionally leave it always on but nothing to pair up for testing purpose. No different on battery usage. The BT 4.0 in fact use less power than Wi-Fi.

After I get the watch, and paired it up with my phone, I still can't see any significant different on battery usage. Same as my wife's 6+ and my daughter's 5s. We bought the 5s purely to pair up the watch for our daughter, her phone don't even has a sim card. It's the best tool to access how much battery required to run the watch only. We turn the airplane mode on, and then manually switch the Wi-Fi and BT back on. I didn't run a test accurately yet. However, the overall battery consumption on the 5s is less than 1% per hour. So, the battery drain effect should be almost negligible on the 6+.

And I can confirm that the watch won't make the usage time always equals to the standby time. The following screen capture is made on the 5s. As you can see, they are different with the watch paired. And the 5s still has 100% battery after disconnected from the charger for more than an hour. So, the "pure watch consumption" is actually very low. 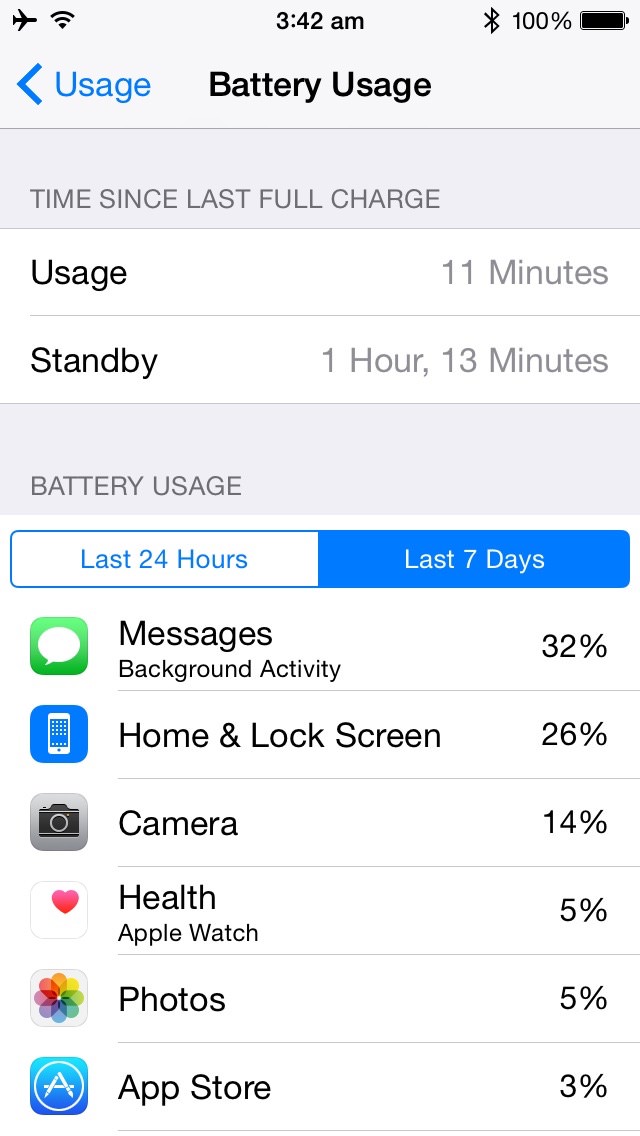 Yeah, what flur said (and similar to my earlier reply)- while the Watch obviously keeps the BT on between the two devices, it does not- or should not- be causing your iPhone to not rest. Having your battery usage the same as the standby time is, and always should be, an obvious sign that something is wrong with your phone.
C

I got my watch yesterday at 4:00PM and was shocked to see my phone battery on my 6+ had completely drained. I closed the AW app on the phone, shut down both the phone and watch and restarted, and bingo, no issues. Here is where I saw this

Thursday at 8:27 AM
BarryL
B
E
Pairing Existing Watch with New iPhone