Parallels today announced an update to Parallels Desktop 10 for Mac, the company's software for running non-Apple operating systems safely on a Mac. The new update brings "experimental support" for Windows 10 and Office Preview for Windows 10 - including the expected Word, Excel, and PowerPoint programs - into Apple's OS X Yosemite ecosystem. 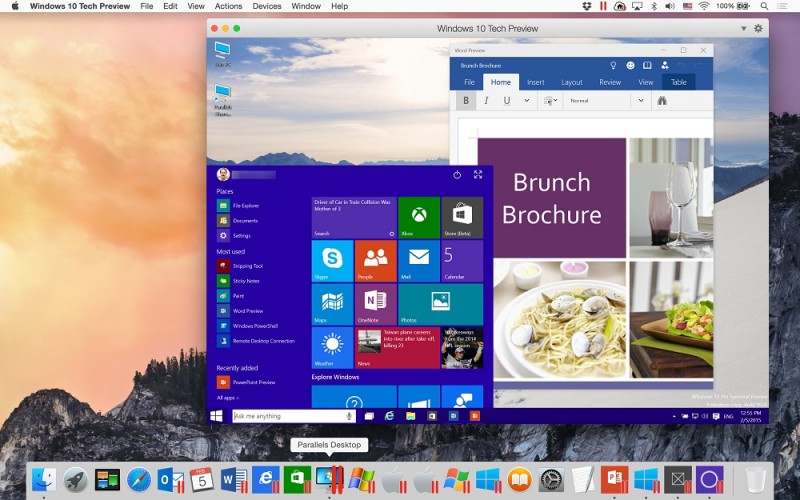 With the update available as a download within the Parallels Desktop app for existing users, the company promises the Mac-based Windows 10 experience will provide users with "everything Windows 10 has to offer." This includes everything from the new Start menu, Photos, Maps app, and Cortana, to the Windows Store beta which offers Office Preview for Windows 10, all available without having to erase the existing functioning operating system.

"Parallels Desktop enjoys very strong support among software developers and IT pros. We are happy to deliver all the tools they need to quickly and safely test or run the latest OS and applications, now including the Windows 10 Technical Preview," said Parallels president Jack Zubarev.
Click to expand...

Parallels Desktop 10 for Mac is available to download for $79.99, with a Student Edition coming in at $39.99. Similarly, users upgrading from existing Parallels Desktop versions, like 8 or 9, can get a discount for version 10, with upgrade pricing set at $49.99. A two-week free trial is available to anyone who wants to try out the program's features, including the new technical preview of Windows 10, for a limited time frame.

Everything seems to work well except for coherence mode which ends up opening blank desktops with the start menu.

Ive had it since launch and it had an installer for the tech preview.... whats new?

Recently converted my VM from VMware to Parallels. It feels like night and day difference. So much quicker and more stable.
S

Did they remove the super annoying Parallels Desktop Control Center window or at least put an option to hide it?

I switched from VMWare to Parallels and like Parallels better. Use VMWare for Linux since I can't convert those over.
U

I stopped using Parallels after version 7 - the business model of "if you upgrade your OS, your current app will stop working" became old very quickly. Switched to VMWare, and it actually runs better I think.
T

This will work great right up until Windows 10 actually launches, then Parallels will require you to purchase Parallels 11 to get Windows 10 support.

Maybe I'm not as jaded as some of the veterans, but as a new Mac owner this year, I just love parallels. It's just so awesome to switch to windows by just a gesture.

Trik said:
This will work great right up until Windows 10 actually launches, then Parallels will require you to purchase Parallels 11 to get Windows 10 support.
Click to expand...

2. Software developers need to eat too.

I've always used VMWare, but Parallels does seem to update faster (and more often) to take advantage of OS X and Window's developments.

In fact, I see little that has changed between VM Fusion 5, 6, and 7 whereas Parallels has added a host of new features since version 8.

eenuuk said:
Ive had it since launch and it had an installer for the tech preview.... whats new?
Click to expand...

I'm not sure either. I've been running Windows 10 in Parallels 10 since the first Windows 10 Technical Preview, and it has worked just fine.

Been purchasing Parallels upgrades since version 6, but I feel it's been more of a money-grab of late, and less of their version numbers having justification. So, instead of spending yet another $50 for yet another minor upgrade, I spent $65 for one of those HP Stream tablets they were literally giving away at the Microsoft Store website. At least I've freed up some space on my MacBook's hard drive, and it's actually a separate computer I can use for whatever.

It's a fantastic app, but yes this is annoying. I've now paid for 3 different versions of Parallels and now probably need to pay for a 4th as the multiple monitor support is very flaky in Parallels 9 on Yosemite. (Well, I don't actually know if Parallels 10 would be any better..)

I've had the November 2014 tech preview (and now the late January 2015 Technical Preview since it updated itself a couple of weeks ago) of Windows 10 running seemingly happily on VMWare Fusion 7 for the last couple of months... granted I haven't done as much heavy lifting testing with it as I first envisioned but it seems to run fine in a "Windows 8.1" VM container.

I've owned Parallels 4,5,6,7 and 8. After that I've stopped upgrading for the same reason as you have.

2. Software developers need to eat too.
Click to expand...

I agree that developers have to eat too. I am also a developer.
But in case of Parallels this simply isn't that simple. First off, you buy their product. Then there is no support what so ever. I personally saw lots of forum topics being deleted for no reason what so ever, and opening a ticket just to get it unanswered and closed...

Developers have to eat. You are right. But in this case they are being unfair to their paying customers, and just plain money grabbers. Parallels has got a lot of customers, so they think they can treat them as they please.

I've stopped buying their product coz of that.

2. Software developers need to eat too.
Click to expand...

Good point, Professional developers get paid so little.....
B

Never paying them a dime again. I reformatted my computer and my activation code was declined. Called customer support and they said that they couldn't issue me another activation. Suggested that I buy the product again.

Think of the children!

I just upgraded to 10 from 8 to install Yosemite. Discount price and $10

iTunes card. I know changes have to be made with each major upgrade but to claim it is a requirement to upgrade is misleading.

However, for me the difference between 8 and 10 was worth the upgrade. It recognizes multiple monitors in the VM easily.

I will wait until I read how well the gold release of Windows 10 work before updating. It pays not to be on the bleeding edge all the time.

I still run Parallels 7 on Yosemite, including running the Windows 10 Preview in it.

It runs just fine - it just complains "THIS WON'T WORK!" every time it launches. But it works fine.

I agree. I may not switch since my needs aren't that extensive, but after buying two copies of 9 and then a month later being told I have to buy new copies for compatibility with Yosemite I may not buy new licenses.

If I have to pay again, it opens the door for me to migrate over to VMWare.
A

VMware does the same thing. I've upgraded Fusion every year because inevitably, when I upgrade OS X, the earlier version of Fusion develops glitches, which (surprise, surprise) are fixed in the new major release of Fusion.

I've used VMware Fusion since version 2.0 and I'm currently considering switching to Parallels since I only run Windows VMs. VMware has gotten incredibly lazy in the minor updates department. They issue one minor update every three or four months now on average.

They have an annoying bug that's been around since VMware Fusion 6.0 where USB devices will not automatically attach to the VM upon startup of the VM despite my indicating in the USB Preferences that that's what I want to happen. So, I have to manually attach my USB devices to the Windows guest OS every time I boot it.

When I contacted VMware support about the issue over a year ago, the guy said they changed the behavior of USB devices in Fusion 6.0 because "people were having a difficult time finding their USB devices in OS X when a VM was running". His statement made absolutely no sense and I told him that. It's not that complicated. A USB device can either be connected to the host (OS X) or the guest (Windows) but cannot be connected to both simultaneously.

It's asinine that Fusion 7.x still gives you the option to connect a USB device to the guest OS automatically upon startup even though by VMware's own admission, the software will not respect that setting.
Last edited: Feb 11, 2015

I have both Parallels and Fusion and both are actually updated at similar frequency. While older version of Fusion tends to work with OS upgrade, it typically has at least few minor issues while the new version doesn't.