So I updated to 9.3.1 thursday/friday last week on my iPhone 6 and everything has been working fine. Until today..

I was using my iPhone throughout the day, and all of a sudden I opened my iPhone to have this (attached pic) popup on my screen. There is no "later" or "cancel" just continue. You can't get past it in any way.. Is this Legit? And if so WHY wouldn't Apple say something after the upgrade? not 3+ days later and completely lock me out of my iPhone...
I needed to get past this screen and respond to someone... but had to resort to having someone ELSE do it because I didnt want to deal with this until later if it was legit, or at all if it wasn't.

Again, IF this is legit... WHY can't I put it off till later?
(Only have iCloud for email on the iPhone, so it's not email related. Thats the only thing I have found people ask about if it's exchange or not etc. And no, my iPad does NOT force me to change the password...) 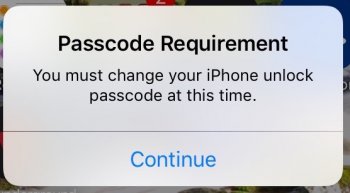 maybe because you are still using a 4 digit passcode and now it has to be 6?

wongster said:
maybe because you are still using a 4 digit passcode and now it has to be 6?
Click to expand...

mine is 4.. but like I said my iPad is not doing this, just the iPhone. Both have TouchID setup.

wongster said:
maybe because you are still using a 4 digit passcode and now it has to be 6?
Click to expand...

So it's a legitimate popup? just maybe a bug?
Just caught me off guard cause there is nothing I can do but continue.. which is not the norm for Apple.

the only thing i can think of is you have a iPhone that is administered by your work. other then that, this is the first time i ever heard of it. mine is 5 digit. i think i did a restore from backup , and erased it, and thats why it asked me for a 5 digit one. i never saw a pop like that
[doublepost=1460429458][/doublepost]http://arstechnica.com/apple/2015/0...passcodes-on-newer-iphones-ipads-under-ios-9/

I had this happen to me when I was running a beta before, I just pressed continue, then never entered my passcode into the settings app to change the password, instead just hit the home button and lived my life.
It was really weird though, and I am not sure at all why is happened.

Nope personal iPhone.
I've seen this exact same popup when I got home and was able to search.. but it had a "later" or "Continue" option, not just Continue. Or it had a 60 minute timer, which was a beta bug.

I have tried just trying to bypass it with the home button, nothing. Siri will popup in the background though.. and works.

EDIT: Ok restarted iPhone, still asking for the passcode.
Kept going back and forth going to Siri and exiting, since it would briefly go off my screen and *sometimes* allow me to actually use the screen. Was able to get the popup off my screen and went and changed my passcode manually without using the popup.

Popup seems to have gone away.. cross fingers. Just odd that the iPhone was doing this, but the iPad that I updated earlier in the week is not. Exact same settings and accounts..
Last edited: Apr 11, 2016
C

If you have an Exchange email account set up on the phone, the administrator can require passcode changes.

chabig said:
If you have an Exchange email account set up on the phone, the administrator can require passcode changes.
Click to expand...

Nope, just iCloud.
Thats why I said in first post its not the email, or MDM either.
M

I also have this, but with a 60 minute timer (48 mins left). I have a 4 digit passcode and I access my Google calendar via an Exchange account.
[doublepost=1460461385][/doublepost]Hitting continue until the box dissapeared and then restarting the iPhone seems to have killed it.

You can also just enter your current passcode and keep it the same.
M

I just had this exact same screen appear on my iPhone this morning! Never seen it before on any of my Apple devices. Like OP wondering what the heck and looking for info on if it's legit and not some malware. Decided to come here first on my iPad and see if others were experiencing it.

Passcode Requirement
To change your passcode, first
Enter your current passcode.
(space to enter password*)
Emergency | Continue
(then dial pad is below)

This is a personal phone, 4 digit passcode, no iCloud, and no administrator.
Last edited: May 19, 2016
M

So back on 19th called Apple Support and was told they had only a few reports of this. Doubted it was malware and likely a bug. One person had me do a Reset of All Settings, changed my passcode (decided to set it to a 6-digit this time), even re-entering my fingerprint, and hadn't had the problem resurface...until tonight.

Same thing all over again basically, slightly different screens although first time I shut the phone off after the two screen messages mentioned above in my previous post and called Apple. Tonight after shutting the phone off and having the message pop back up again, ignored and turned off. Checked in on it later and now was saying "Passcode Requirement - You must change your iPhone unlock passcode within 60 minutes - Later / Continue " The pop up messages continued to countdown the minutes as time went on and I didn't know if it was going to brick on me when the time ran out, so hit Continue at one point and it then said " New passcode - Enter a 4-digit passcode (Space to type with grayed text saying "Password")" and then "Emergency / Continue". Again I noted the screens were asking for Passcode and then asked for Password. And having had a 6-digit passcode thought it bizarre it was now asking to downgrade to a 4-digit one.

Found this other thread today and this Passcode Requirement screen pop up has been around for quite some time.

Wife just call and told her iPhone asking to change passcode. iPhone was sleep mode. No any timetable requirements to change the code. Pls. Guide me
P

I don't know what this is but it seems to have happened to a few people, here's another thread on it: https://forums.macrumors.com/threads/passcode-change-requirement.1967173
M

As someone who this Passcode Requirement pop up message just happened to twice this month and having spoken to Apple Support about it initially, I suspect your wife could very well be getting the countdown message at some point. Its something Apple is aware of and I think perceives as a bug. I would change the passcode when prompted or try entering even the same one if it will let you. I would not bother clearing Safari history or reset all settings. Did that the first time at Apple's suggestion and a few days after my next iOS update had it happen to me all over again. Don't think either suggestion resolves the issue.

Mine popped up after OTA software updates (9.3.1 and 9.3.2); but from other posts I've found this is something that goes back for quite sometime. With all the recent calls to Apple Support and attention it's been getting hopefully they will track it down and fix in an iOS release. It is alarming to get it suddenly when you've never had it happen before.
Last edited: May 31, 2016

Just got this same pop up this morning. Changed it to the first four digits of my existing passcode since it only allows the four digit option. After I made the change I went back into settings and changed my passcode back to my regular six digit code without any issue. Really strange error/bug.
You must log in or register to reply here.
Share:
Facebook Twitter Reddit Email Link

Wednesday at 3:34 AM
Camile Dai

Passcode wrong even though it is correct