AS per title, I am looking to install an SSD (M2 or SATA) via a PCI-Express card

Those adaptor for PCIe SSD is cheap, but the SSD is expensive.

The SATA SSD is cheap (relatively), but the PCIe adaptor is expensive.

I don't know if there is any real cheap solution overall as long as you want to install a SSD into the PCIe slot.
D

I am just looking to see if they are compatible ?

I am just looking to see if they are compatible ?
Click to expand...

You better post all your target items at here. Otherwise, no one can tell if they are compatible.

If you looking for a very good deal with very limited quantity. No need to post the link here. Just the exact model is good enough.

Anyway, For $50, no doubt that a reliable PCIe SATA adaptor will cost more than that.

I personally prefer to spend money on the SSD itself, but not the adaptor. Therefore, for total > $100, I will pick a PCIe AHCI SSD + cheap adaptor. It's bootable, very fast, and work natively on the cMP.
D

Anyone of the following ?

Anyone of the following ?

If you can get these SSD for $50, I will say that's a pretty good deal. But I really can't see why you need to go this route. The adaptor is expensive, and at the end, you won't get some extreme speed.

If you want a very high speed scratch disk. Then go for the real PCIe SSD.

If you only need the SSD's low latency for OS, then a normal 2.5" SSD is good enough.
D

dickybow said:
Because a regular SATA SSD in one of the drive bays would be limited to SATA 2 which would offer nearly half the transfer speeds

I am looking to go down this route because cheap M2 PCI Express adapter cards are only $5 and allow me to use SATA 3 speeds (approx 500/450 mb/s read&write)
Click to expand...

Also, as my last post mentioned, how do you plan to use these SSD? If for OS, you are looking for the wrong limit. OS doesn't need high sequential speed (and CANNOT utilise it), but the 4k random read speed.

Unless your main workflow is copying large files from one drive to another, or running benchmark for the whole day, etc. A normal home user actually can rarely utilise that max sequential speed. I own a PCIe SATA III card, and this is my experience. I am still happy to own this card, not for its speed, but it gives me 2 extra SATA ports (in fact, one of the port is now running a 2.5" HDD).
D

It would be my OS drive with software installed. For a small outlay I don't see why I should bottleneck my system with Sata 2
P

h9826790 is right though. You're looking at the wrong bottleneck if you're plan is using it as a boot drive. Unless you're dealing with very large files and need constant high sequential speed, then you won't notice a difference at all as Sata 2 is fine for the 4k random speed needed for a boot OS.

My cMP is maxed out with 4 M.2 PCIE SSDs on the Squid card, which I use each blade for media cache/scratch render drives for multi-layer 4K video editing and compositing. So my needs are high sequential speed. Although I have my OS boot on one of them, there is no difference in speed from when I had a SATA SSD connected to a SATA 2 port.
Reactions: h9826790

It would be my OS drive with software installed. For a small outlay I don't see why I should bottleneck my system with Sata 2
Click to expand...

NO. Those cheap card is NOT for your targeting SSD. They are cheap because there is no SATA controller onboard. You may able to get a relatively cheap PCIe SATA card, however, not necessary bootable. Also, they are relatively cheap because their speed is no way close to your 550MB/s targeting speed (may be around 350MB/s). If you don't want to bottleneck your SSD, you will need an expensive PCIe SATA card.

Why? Because you are not bottlenecking anything in real world. 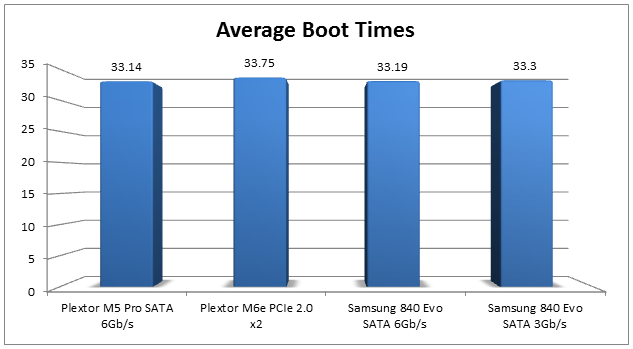 As you can see, for OS or apps loading, the difference between SATA II, SATA III, PCUe x2 is effectively zero. Then why make things complicated?
Reactions: Synchro3
D

I appreciate what you are saying but you don't even know that I intend to photo edit and encode video.

There is no great expenditure for me over a SATA drive. Will a cheap M.2 PCIE adapter work or not?
P

But you mentioned in your previous post that you plan to use it as a OS drive, hence why we are mentioning this advice. The cheapest PCIE card for a mSATA SSD like the Samsung PM851, with its own controller, is something like this:
https://eshop.macsales.com/item/OWC...QHJznzTbxD2gl7BNXRTlpJOR0pR_ME3hoCiBkQAvD_BwE

Even so, you're not gaining that much sequential speed at all. If you plan to photo edit/video encode, you'll be better served having that scratch disk on a separate drive.

dickybow said:
I appreciate what you are saying but you don't even know that I intend to photo edit and encode video.

There is no great expenditure for me over a SATA drive. Will a cheap M.2 PCIE adapter work or not?
Click to expand...

Co-incidentally, I also use my Mac for photo editing and videos encoding.

Again, they are not hard drive sequential speed limiting.

For photos editing, SSD speed up the loading process, but that's mainly speed up loading the image icons, not the actual images. For photos, a 100MB one is a large photo already, even HDD can finish the loading within a second. Sequential speed doesn't really matter. However, when the UI try to show you multiple photos small icon preview. That's random small files reading. In this case, SSD can easily be 10-30x faster than HDD. However, for this kind of random small files reading operation, its actual output is rarely limiting by the SATA II bandwidth. If a PCIe SSD can show you 100 photos preview in 1 second, most likely a SATA SSD connected to the SATA II port will also show you that same 100 photos preview in 1 second.

On the other hand, a very fast scratch disk may speed up editing part if you run out of RAM. In this case, install more RAM is actually more cost effective than install the same SSD on a PCIe card (but not the native SATA port). I only do some normal size simple photo editing in my leisure time. From memory, I never seen Photoshop access the scratch disk with >250MB/s. Even it happened, most likely just in a split second, not even noticible by the user.

For video encoding, that's 99% CPU limiting. In fact, the real encoding process is 100% CPU limiting on the cMP (unless you intentionally put the video on a super slow USB drive or SD card to encode). The remaining 1% is some encoding software will try to load the whole video once before it start encodings. In this case, the loading process will be much faster with higher max sequential read speed. Let's say I want to encode a 100GB 4k video. It may takes 10hours to finish the job. TBH, a faster SSD may helps the loading in some case. But finish the loading in 7min or 3.5min before the encoding really start, the process overall still takes roughly 10hours, practically no difference. And this only happen in some specific software with some specific video format. Not happening in general.

As you can see, my cMP encoding videos by AME for 24/7 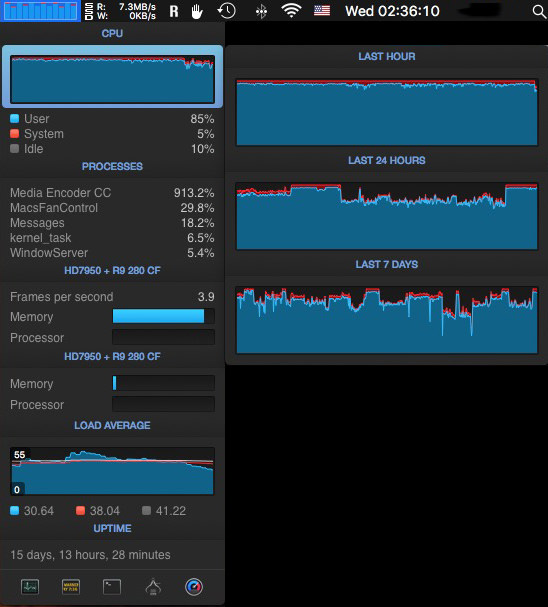 And the disk usage is like this (this including my cMP serve at media server, with some regular backup activities, both me and my wife use the cMP for general purpose, and some photo editing...) 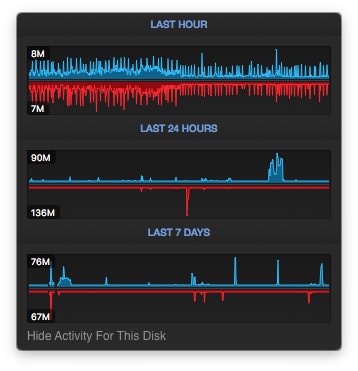 I personally won't mind you go for the PCIe SATA adaptor. That's your choice, wont affect me at all. If that makes you happy, please go ahead. But I want to point out that's more for making yourself satisfy, not really help your work flow much in general. Since you asking for a budget choice, AFAIK, the best budget choice is actually plug in a SATA SSD into one of the native SATA II port.

Fast, cheap, reliable. You can only pick 2 of them, not 3. If you want something fast and cheap. I think your best choice is something like eBay or forum's market place. Looking for someone selling the used stuff for cheap. But of course, in this case, usually no warranty, and the card may not even functional properly (low reliability).

For your info, a single Samsung 840 Evo, plugged into the native SATA port gives you performance like this.
A PCIe SSD may load a bit faster, but do you think it really matter? I believe finish loading in 0.25s or 0.17s make no difference for a general user. Also, this difference most likely come from the SSD itself (e.g. SM951 vs 840 Evo), but not the connection type (SATA II vs PCIe x4).
Last edited: Aug 27, 2017

There are two different general types of SSD which use the m.2 form factor: SATA and direct PCIe. The latter is further divided into two types, AHCI and NVMe.

SATA SSD's require a SATA controller on the hosting card. The SSD's are relatively cheap but the PCIe host cards they plug into are expensive, because you need a SATA controller. The best you can do with this sort of setup is SATA III speeds

PCIe SSD's are the ones that plug into the super cheap lycom / sintech / etc cards. These cards have no controller on them, they are just a way to mount the m.2 SSD and plug them into the PCI bus. So, the cards are cheap, but the SSD's are usually more expensive. And, there's a trap here: the NVMe SSD's are by far (FAR) more common and less expensive, and you can't use them with Mac OS! (unless you are running high sierra, which might support some of them, or unless you fiddle around with kext patching.) For OS/X up to and including Sierra, you need an AHCI SSD, and they are relatively rare and quite expensive in general.

In other words, tanstaafl. You can put money into the PCIe card so that it includes a SATA III controller and get at best a modest real world improvement over the SATA II in the drive bays. Or you can put money into the SSD for an AHCI PCIe SSD, and get a somewhat better real world improvement over SATA II in the drive bays. Neither one is going to blow you away, compared with the jump from spinners to SSD in the (SATA II) drive bays. I have both SATA II SSD and NVMe PCI SSD (the latter works for me because I run linux), and while the PCIe unit is faster, it's not all that much faster except when I run long, I/O bound benchmarks or processing jobs. Then I'll see a 25-40% improvement. It's very hard to notice subjectively doing interactive stuff.
[doublepost=1503860574][/doublepost]By the way, don't imagine that a SATA III connection makes things run twice as fast as SATA II. Yes, the theoretical transfer rate is double. BUT! a) it's theoretical, and real world never runs that fast; and b) actual transfer is not all of your runtime, and usually it's not even most of it. There are transfer setup latencies, latency on the SSD side, filesystem overhead delays, context switching overhead, and on and on. If we imagine just for example that it takes 10 seconds to boot up from a SATA II SSD, it might take 9.5 or 9 seconds from a SATA III. That's the bar graph that h9826790 posted for you earlier.