For the last several years, Tactus Technology has been working on displays that take advantage of microfluidic technology, with buttons that raise up and disappear on demand for a superior touchscreen typing experience.

As of today, the company is ready to unveil its first product to the world, an iPad mini case called "Phorm." An all-in-one case, keyboard, and screen protector, Phorm can dynamically add and remove tactile buttons on the iPad mini's screen to add texture to the on-screen keyboard.

As seen in the video above, sliding the bar on the back of the Phorm case to the right causes small fluid-filled physical buttons to pop up on the screen protector portion of the case, giving users a tactile typing experience while still allowing them to use the default iOS keyboard. Shifting the bar to the left causes the buttons to disappear again, allowing the touchscreen to be used as normal. 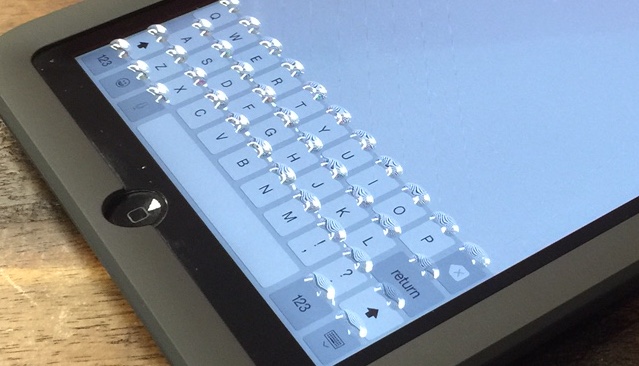 Here's how it works: there are a series of small channels filled with fluid behind an elastomeric panel (aka the screen protector portion of the case) and when activated by the slider, pressure is introduced, causing the fluid to come up through the channels and into holes, where it presses against the elastomer, physically changing and morphing the display portion of the case to create buttons. In the opposite slider position, the pressure is released and the buttons disappear as the liquid is dispersed back into the channels.

According to Tactus Technology CEO Craig Ciesla and CTO Micah Yairi, who spoke to MacRumors ahead of Phorm's launch, the case uses a tiny amount of fluid that poses no harm to an iPad should it be dropped or damaged in some way. In fact, the Tactus team extensively tested the Phorm, performing drop tests, scratch tests, and more, and found that the case and its protective front panel provide solid protection for an iPad and can potentially keep the glass from shattering if dropped.

Ciesla and Yairi said that usability was one of the most important aspects Tactus considered when developing the Phorm case. In internal and third-party testing with people aged 19-70 with a wide range of hand sizes, 70 percent preferred the Tactus solution to a touchscreen.

The Phorm case is meant to stay on an iPad all the time, alleviating the need to switch cases and accessories regularly to accommodate different tasks. As Ciesla and Yairi pointed out, the Phorm offers several benefits over a Bluetooth keyboard -- there's no battery drain, there's no need to charge it, and it provides access to all built-in iOS keyboard features like word prediction and spell correction, with the addition of tactile feedback for faster typing.

"We built Phorm so tablet users will never again have to choose between thin stylish devices with touchscreens and amazing usability," said Dr. Craig Ciesla, CEO and co-founder of Tactus. "Typing on a flat touchscreen is still a really unnatural user experience. Adding a tactile dimension to an otherwise flat surface changes the way we will interact with all the screens in our lives. This is just the beginning."
Click to expand...

Currently, Phorm is only available for the iPad mini, but the Tactus Technology team has plans to launch an Phone 6 Plus Phorm case in the near future. Phorm cases for iPad Air 2 and iPhone 6 are also in the product pipeline.

While it's a pretty cool technology, do people actually still have problems with touchscreen keyboards anymore?
Comment
F

It's pretty cool. I thought it would be more expensive.
Comment

The hint of a smirk on the guy in the video leads me to believe he thinking "Buy this, suckers. Buy it!" through the whole video.

They're still less then ideal, I can probably type on a real keyboard four times as fast then on a virtual one. While this seems like an early technology in the process, having tactile displays would be amazing for games, art, etc. In this case I do think having a little more feedback as to where the button is could help, we'll see if this iteration does it.
Comment

I always wanted to add a switch to my iPad to give it herpes...

But a terrible spokesman. I understand when companies want to honor their inventors, chief engineers, or CEO by having them appear on video...but there is some marketing advantage to having it done professionally. Not every CEO has the screen presence of Michael Dubin.
Comment

I don't think that's so much a problem, it's just that one has to be looking at the screen much more when touchscreen typing. I think it's a cool idea and would love to see it eventually be able to be activated by the keyboard popping up on the scree without having to touch the slider.
Comment

Seems like a complex solution to not much of a real problem.

Also not adaptive/responsive in any way, so as soon as Apple even slightly changes the layout of the standard keyboard, you've got yourself an overpriced basic cover.
Comment

I don't mean to break it, but what if your a landscape typer? I guess that's saved for v.2.0
Comment

"Anxiety of autocorrect"? What the heck is he talking about? Autocorrect helps me type faster.

The biggest problem I see with Phorm: it appears to be portrait only. I prefer typing in landscape mode. I leave thumb typing to my iPhone.
Comment

what happens when a year from now apple changes the keyboard layout slightly and the buttons are off?
Comment
M

The Phorm case is meant to stay on an iPad all the time, alleviating the need to switch cases and accessories regularly to accommodate different tasks.
Click to expand...

Why do I need this...my iPad already has a keyboard? (and this will make it bulkier)
Comment
I

MartinAppleGuy said:
I don't mean to break it, but what if your a landscape typer? I guess that's saved for v.2.0
Click to expand...

And what happens if apple changes the design of their keyboard in iOS 9 so the little bubbles don't line up any longer?


I imagine this company would have to release their own keyboard extension if that happens.

Now if they can make it programmable so the software can raise bubbles anywhere on the screen they like, that would be a real neat trick.
Comment
T

But a terrible spokesman. I understand when companies want to honor their inventors, chief engineers, or CEO by having them appear on video...but there is some marketing advantage to having it done professionally. Not every CEO has the screen presence of Michael Dubin.
Click to expand...

The funny thing is this guy is a professional and is the spokesman in most/all of the commercials he makes. I've never been a fan, but some people must like him I guess.

That isn't really the point, when this tech advances further think of the possibility - actually creating physical, tactile buttons on a digital screen.

In the accessibility realm this would be huge - integrating a braille reader directly into the device's display.

We are really only at the earliest stages of implementing touch into computing, there is so much more that can be done with dynamic tactile feedback.
Comment

decimortis said:
The hint of a smirk on the guy in the video leads me to believe he thinking "Buy this, suckers. Buy it!" through the whole video.

And then .... BlackBerry's keyboard patents just went to the garbage bin!
Comment

That dude in the commercial is way serious.
Comment

mbc2237 said:
That dude is in like every commercial these days. He never even changes his outfit.
Click to expand...