A forum post at Chinese site WeiPhone offers a photo of what is claimed to be the iPad 3's logic board showing an "A5X" system-on-a-chip.

Apple is expected to introduce an upgraded processor and graphics package for the iPad 3, with the assumption being that it would be called the A6 after the A4 initially appeared in the original iPad and iPhone 4 and was succeeded by the A5 in the iPad 2 and iPhone 4S. But if this photo is to be believed, that assumption appears to have been incorrect, with Apple instead having branded the upgraded package with the A5X name. 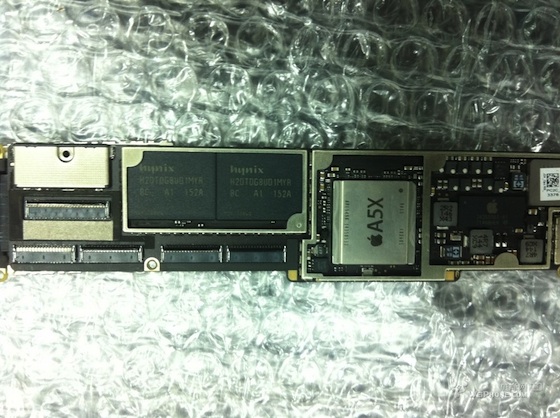 An "A5X" as a step-wise upgrade to the A5 corresponds with progression of processor part numbers as revealed by BGR in February. At the time the A4 was known to be the S5L8930X, the A5 as the S5L8940X and the new iPad processor as S5L8945X.

Several other features are also visible on the logic board, including a pair of 16 GB flash memory chips from Hynix and a rectangular Apple-branded chip. That chip appears to correspond to power management chips found in previous iPad teardowns but which carries a higher part number, suggesting an upgraded part.

Apple is expected to introduce the iPad 3 at a media event on March 7, with the device also receiving an ultra high-resolution display and LTE capabilities. Other claims have suggested that it will carry a slightly more tapered case design and perhaps offer an 8-megapixel rear camera.

Article Link: Photo of iPad 3 Logic Board with "A5X" System on a Chip

Then it's probably just going to be a higher clocked dual-core, probably at 1.5GHz or higher. Maybe the GPU will be quad-core?
D

Not that i don't enjoy this (because i really enjoy this ) but Why are there so many leaks? i don't think there were this many last year.

Regardless this is very cool

Maybe it's a dual core A15 that has been branded A5X. Makes sense to me.

I don't want it now.

Looks legit to me, unless it's a prototype of course. A5X... would that suggest quad core A5 or just an overclocked A5? If it's a prototype, maybe it's just the code name?

I suppose the real question to ask would be if the A5 chip is sufficient to power all these new (rumored) features we keep hearing about. The retina display is going to create a surge of image and video editing apps, and you need quite a bit of power and RAM to manipulate HD video and high res images.

Does Apple actually print "A4" or "A5" on existing chips?
D

Who cares what they call it. I'm certain it'll be a beast, and that's all that matters.
M

neiltc13 said:
Does Apple actually print "A4" or "A5" on existing chips?
Click to expand...

neiltc13 said:
Does Apple actually print "A4" or "A5" on existing chips?
Click to expand...

I think one should consider that the iPad has to "survive" the next holiday shopping season, because I'm sure there will be no additional iPad this year.

So, I'll bet it will be ahead of the competition by a large factor.

On the other hand, just imagine you want to start shipping these in just a few weeks. They need time to produce them, so the first batch for the shops has already been produced weeks ago...

Meaning that the specs, including the contracts with suppliers, are much older ...
J

i'm geting most things i want. i'd like to see 2 64gb memory chips from hynix.

I like these all these "leaks". It usually means something's about to come out

Maybe the A5X is just a prototype chip?

Any redesigned Mac Book Pros hanging around with all these iPad 3 parts?

Even if it's a faster dualcore i don't care. It's the RAM,camera's and the display what needed an upgrade