Adobe is celebrating the 30th anniversary of Photoshop today with several updates to the app across the Mac and iPad.

A key new feature on the Mac is support for Dark Mode on macOS Mojave and later. Photoshop already has a dark user interface on the Mac, but now system dialogs like the File menu will also be dark based on the systemwide appearance selected in System Preferences > General. 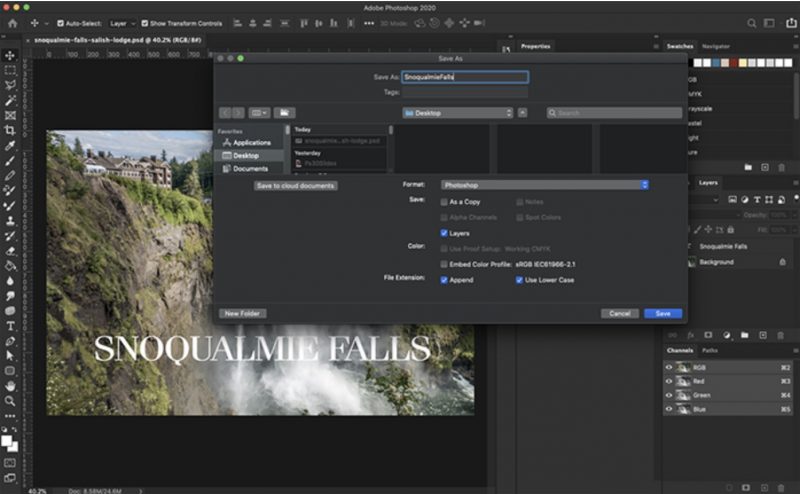 The desktop app has also received Content-Aware Fill improvements. Now, you can make multiple selections and apply multiple fills without leaving the workspace. You can use the new "apply" button to iterate your fills before committing, and click "OK" only when you are finished, according to Adobe.

Adobe says it has also improved the output quality and performance of Lens Blur on the desktop, and made performance improvements, claiming that clicking interactions like panning and zooming are smoother and more responsive.

On the iPad, the headline new feature is the Object Selection tool, which can automatically find the object within a selected area for you based on Adobe Sensei machine learning. 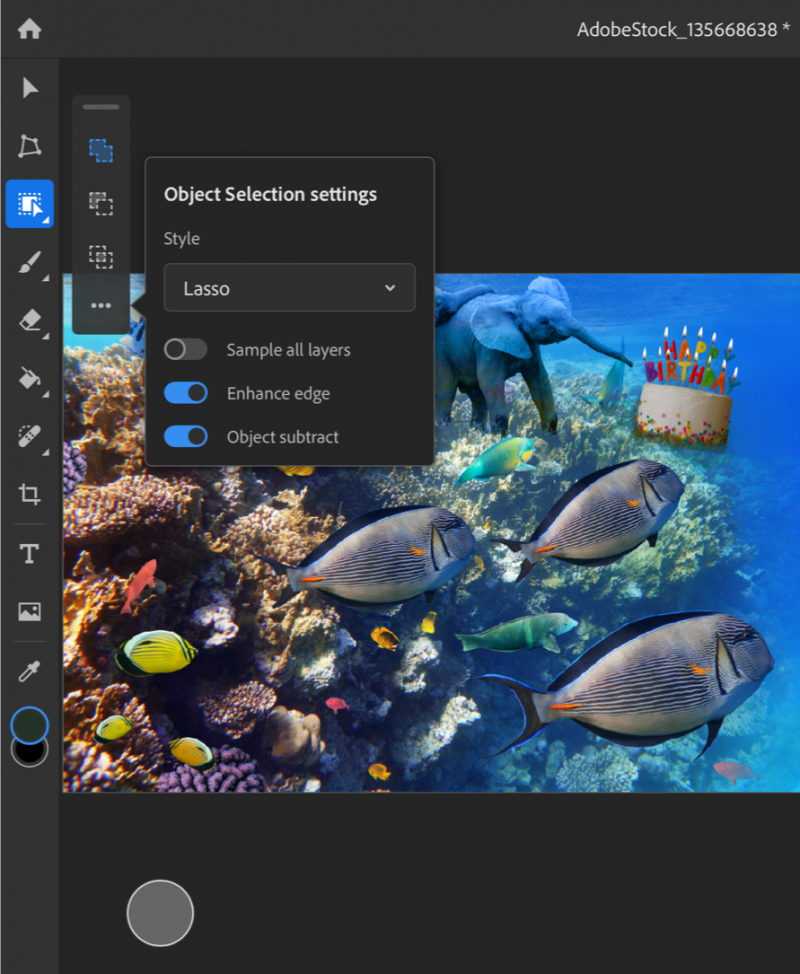 The Object Selection tool is designed to give you speed, but also more control over the selection process on more complex images. For example, it is the right tool if you have images with multiple objects, or when selecting a part of an object, or if you want this part but not that part, or need to isolate more than one object in an image. With the Object Selection tool, you draw a rectangular region or even a crude lasso around the area you want to select, and the tool automatically finds and selects the primary objects inside the defined region.
Click to expand...

Photoshop for iPad is available on the App Store.

I am immediately deleting Affinity and buying the Adobe subscription again, that's even more important than Fantastical 3's €40 watch… integration… or whatever it is that's now worth €40 a year. /s
Reactions: smirking, mburkhard, atikalz and 7 others

It only took 18 months for Adobe's flagship application to get dark mode... probably busy dealing with flash nightmares.
Reactions: TMax, Pahanda, mburkhard and 4 others

How about re-writing the app so that it performs as well as a £50 competitor?
Reactions: nickgovier, mburkhard, atikalz and 9 others

With so many decent non-subscription alternatives on the market now, I assume Adobe is staying alive due to their entrenched user base that's into their whole ecosystem and for whom it would be too expensive to switch. Hmmm ... maybe Adobe is modeling itself after Apple....
Reactions: nickgovier, ptklenk, CarpalMac and 12 others

Photoshop adding Dark Mode support is a good start. Let's see some more features and performance enhancements for the Mac.

If it wasn't for CMYK support I would just use GIMP. I can't stand Adobe anymore.
Reactions: Marekul and Victor Mortimer
I

Adobe, the next Nokia!
Reactions: Morgenland, Will do good, Victor Mortimer and 2 others
N

Photoshop peaked at 4.0 back in the 90s. That's when layers were introduced which made everyone think about their 2D image in 3 dimensions. Was really ground breaking at the time and took a bit to conceptualize.
Since then it's mostly been incremental improvements. It's Actions was another huge boost.
Reactions: Marekul, Victor Mortimer, lostczech and 2 others

How about bringing back a purchase instead of requiring a subscription? Stupidity....
Reactions: mburkhard, rhett7660, Marekul and 9 others

The only thing that I really want from Adobe is Lightroom since there are no great alternatives. RawTherapee and Darktable are fine but UI needs improvements.

On the other hand, I use Affinity Photo and Designer. Not going to Photoshop or Illustrator anytime soon.

Until they start selling software again and do away with this subscription based BS... no thanks.
Reactions: mburkhard, Marekul, Morgenland and 5 others
I

arvinsim said:
The only thing that I really want from Adobe is Lightroom since there are no great alternatives. RawTherapee and Darktable are fine but UI needs improvements.

On the other hand, I use Affinity Photo and Designer. Not going to Photoshop or Illustrator anytime soon.
Click to expand...

If you’re looking for a Lightroom alternative, consider Capture One. It’s not perfect, but it’s no more flawed than Lightroom.
Reactions: mburkhard

I bailed on Photoshop when it went from a tool to a relationship, and the install went from an app to 1000 sprayed files, some hidden and some not. Now that there are a number of excellent alternatives, I remain pleased that I bailed on the Big Brother of the photo retouching world. I miss a couple of plug-ins, but it’s a small price to pay.
Reactions: mburkhard, Marekul and japanime

I have long since dropped Photoshop & Lightroom, having moved to Luminar 4 (and very occasionally Affinity). Luminar 4 does everything I need quickly and easily.
Reactions: Marekul and Blackstick

My $50 copy of Affinity Photo and I would say "Happy Birthday, Adobe," but we're too busy doing serious work.
Reactions: mburkhard, sideshowuniqueuser, Marekul and 5 others
C

incoherent_1 said:
If you’re looking for a Lightroom alternative, consider Capture One. It’s not perfect, but it’s no more flawed than Lightroom.
Click to expand...

I would sure like to find a LR alternative. But so far that's been elusive. And then there's the major issue of having thousands of edited photos in LR over the years, and no way to move/export those photos with their non-destructive edits to another program.

I just recently went with Adobe's subscription knowing that I'll be upgrading my computer soon. And with a new OS, LR 6 would be dead going forward.
F

I am immediately deleting Affinity and buying the Adobe subscription again, that's even more important than Fantastical 3's €40 watch… integration… or whatever it is that's now worth €40 a year. /s
Click to expand...

WOW. all that money just cause you like a dark interface?
well ok then
I myself would need some really hot functional features to justify the ongoing monthly charges instead of paying $50 one time for other similar apps
$20.99 just for photoshop x 12 months times how many years your excited by dark mode
Reactions: David G.
S

Comparing Photoshop to Affinity Photo is a joke. If you're using this as a professional tool, photoshop is like 1000x more complex and powerful than Affinity Photo. It's like paint on steroids, photoshop is still way ahead.
Reactions: jennyp, lexvo and Mr. Awesome

Methinks you missed the sarcasm by just a tad.
Reactions: ErikGrim, David G., Duane Martin and 3 others

How about a proper full-screen mode that doesn't mess up the entire window management on the Mac every time you use anything else but photoshop?
Reactions: MacGizmo
8

Still no pay once version?

Guess I’ll continue on with CS6 which is still working great.

What are the best pay once alternatives?
Reactions: mburkhard and Marekul

Wow, time flies like a rainbow-colored spinning beach ball. I started using PS1 in college, and have used every version of photoshop since 1988. I'm not a big fan of the subscription model, but I understand why they did it. For what I do, there really is no alternative.

The next big tool addition should be A.I. enhanced interpretation integration: "I see you are selecting the gray background and making a mask, would you like me to do that for you?" Why yes I would. And while you are at it, do this entire folder full of images.
Reactions: sideshowuniqueuser and Stars&Stripes

I believe the most popular options are Affinity Photo, Designer, and Publisher, all by Serif.

macguru212 said:
If it wasn't for CMYK support I would just use GIMP. I can't stand Adobe anymore.
Click to expand...

For me, it's the Layers that keeps me with Photoshop. I don't do prepress so CMYK ain't that important for me. I can't live without Layers though. Not a fan of subscriptions, so I'll stick with CS2 (never brought any later versions) for a long, long time...maybe forever. I would buy CS6 in a heartbeat if I could get it legally anymore.
You must log in or register to reply here.
Share:
Facebook Twitter Reddit Email Share Link
Register on MacRumors! This sidebar will go away, and you'll see fewer ads.
Sign Up
Top Bottom