Trism, developed by Steve Demeter, was one of the first games in the App Store when it launched 10 years ago. In celebration of the 10th anniversary of the App Store, a new version of Trism, Trism 2, is available for download today.

The original version of Trism came out on July 11, 2008, one day after the iOS App Store went live. Trism was a gravity-based puzzler where the goal was to match up three or more like-colored pieces, making it one of the first match-three games to become ultra popular on the iPhone. 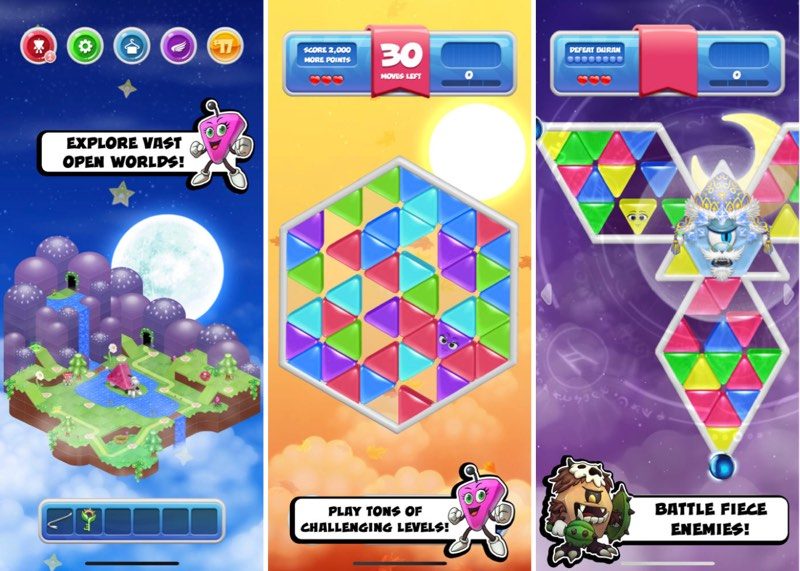 Two months after its 2008 launch, as it soared up the App Store charts, Trism had earned Demeter $250,000, cementing its place as one of the most well-known original iPhone games.

Trism continues to be available for purchase from the App Store even today, but Demeter has decided to follow it up with the first sequel 10 years later, Trism 2. Like the original Trism, Trism 2 is a match-three game where the goal is to pair three or more bricks of the same color to make matches.

In an interview with Variety last week, Demeter said he first began work on Trism 2 in 2010, but it became a "nightmare cycle of starting and restarting, creating and destroying."

Trism 2 was built and rebuilt again until it was perfect, with the aim of a Trism game that's "Zelda meets Bejeweled." The game is launching with two complete islands to play through, with another four in the works as downloadable content. There will be no paid DLC, micro transactions, or in-app purchases.

"The game is about the fans," Demeter told Variety. "I really wanted to make this a love letter to them. I couldn't make it free-to-play. I just couldn't. I thought about that early on, but I just couldn't do that."

Blast from the past.

Bring back Rolando. That game was great.
Reactions: BrettArchibald, ep2002, QuarterSwede and 2 others

I am very confuse…


MacRumors said:
…with the aim of a Trism game that's "Zelda meets Bejeweled."
Click to expand...

WAT. Do we really need this?


MacRumors said:
There will be no paid DLC, micro transactions, or in-app purchases.
Click to expand...

OldSchoolMacGuy said:
Blast from the past.

Bring back Rolando. That game was great.
Click to expand...

Agreed, Rolando was the best phone app EVER.
Reactions: ep2002, OldSchoolMacGuy and QuarterSwede

timborama said:
Agreed, Rolando was the best phone app EVER.
Click to expand...

That and Dizzy Bee were two of my 3G mainstays. Simpler times before IAP and play2win took over the App Store.

Focusx0131 said:
That and Dizzy Bee were two of my 3G mainstays. Simpler times before IAP and play2win took over the App Store.
Click to expand...

For most games I'd gladly pay 99¢ or even $5 for hours of enjoyment, rather than dealing with ads and in-app purchases.
Reactions: Macaholic868

I look forward to battling those "FIECE" enemies. That being said, Trism was - and still is - a great game. I had two games on the App Store when it launched, but neither were anywhere near as good as Trism.

Wow, considering the potential press this game is getting, the developer might want to fix the spelling mistake on his promotional screens!
FIECE instead of FIERCE.

Wow, the sequel is absolutely TERRIBLE. It strips away all the uniqueness of the original game (pulling the rows, tilting the direction, etc). It’s now a dumbed-down Candy Crush clone on a tilt, with an absolutely non-essential “story” component that is childish and wastes soooooo much time.

I was super addicted to the original, but it was hard to get past just a few levels of this. Instant boredom and frustration. I’ve never been more disappointed about a game sequel than this....
Reactions: cargoplex and BrettArchibald
You must log in or register to reply here.
Share:
Facebook Twitter Reddit Email Share Link
Register on MacRumors! This sidebar will go away, and you'll see fewer ads.
Sign Up
Top Bottom