I recently acquired a second Powerbook 3400c. It was sold as untested, and I primarily wanted to rob the LCD for my other 3400c, which works but has substantial pressure defects. I feel like this one is close to working and I don't want to write it off yet.

Just for back ground, I've been working with two separate power adapters-both an "brick" and a later "hockey puck" that are known good and have powered many other computers as well as an external charging cradle. I have two good factory batteries labeled for the 3400 and a third labeled for a G3. All of these batteries will run either my working 3400 or Kanga for 2 hours or more and will keep the computer asleep for over a week, so I know they are good.

The newest one has a 32mb memory upgrade card, but as best as I can tell is otherwise stock.

When I first apply power(whether battery, power cord, or a combination) and then hit the power button, the green LED on top will illuminate and stay lit indefinitely. The service manual advises pressing and holding the reset button for 10-20 seconds and repeating. Usually doing this will cause the light to go out the computer to make a noise that sounds like a fan running. Pressing the power button has no effect, and holding the reset button seems to only toggle between this mode and LED on mode.

I know these have a rechargeable NiMH PRAM battery, and I've tried leaving the computer plugged in with a charged battery for a couple of hours to hopefully charge this up(the service manual also suggests this). I'm wondering about disconnecting the PRAM battery completely. I know this is almost always a "fix" for a non booting Wallstreet-Pismo along with the early TiBooks.

Any thoughts on anything else to try?
Reactions: LightBulbFun

First open it up and see if the pram has exploded/leaked all over the motherboard as its upside down taped to the speaker assembly above all the cable connections on the motherboard. If it has leaked good luck.
[doublepost=1463881342][/doublepost]By the way out of 3 3400's I only found one that had not leaked and was repairable.
Reactions: MikeatOSX

Thanks. I've already had the keyboard off(but not ventured further) and I think the PRAM battery is intact. I'm going to dig back in afterwhile, though and see.
[doublepost=1463883945][/doublepost]The PRAM battery has no signs of leaking, but disconnecting it made no difference.

I'm tempted to swap the battery from my other one.

If nothing else, I'm going to cross my fingers and hope the display on this one is good, and then transplant the logic board from my other one into this case. I'd thought about swapping displays, but the case of the non-working one is slightly nicer than the working one, and a logic board swap looks easier than a display swap(I have an ongoing 17" Unibody MBP project where I took the same approach in combining two computers).

I'm working on a deal also to hopefully buy 3 TAMs, one of which is a parts unit. If that works out, @LightBulbFun has pointed out to me that the TAM is-in a lot of ways-a 3400c grafted onto a PM 6500 logic board. He's been suggesting that I just steal the panel out of the TAM
Last edited: May 21, 2016
Reactions: LightBulbFun

Oh and BTW I would love to get some TAM parts off of you when you get into them..

No on in their right mind would take a panel from one to put in a relatively common laptop, especially since even if this doesn't work out I can probably pick up another for $50 or less and maybe make one good one.

I haven't even gotten around to discussing price on the TAMs, so we'll see but I'll contact you privately. I'd honestly be a bit reluctant to sell parts since scavenging is the only way to get many of them, but we can talk.

In any case, with regard to the 3400-I am also hoping to luck into one with a better memory card also, as both this one and my working one have 32mb cards(for 48mb total). I got EXTREMELY lucky with my Kanga(which @LightBulbFun found on Ebay for me) as it came with a 128mb card installed along with a good battery. The hinges are "floppy" on it, so I'm hoping to also scavenge parts from a 3400 to fix it(although I probably should look at it and see if there's any way I can fix the current ones). The Kanga and my first 3400c were both sold as untested, which actually seems to be fairly common for these computers.

If get one without a charger and aren't a Mac nut who has plenty and also doesn't realize the charger interchangeability on these(esp. that the much more common chargers for later G3s as well as Clamshells will work, along with a bunch of $10 China specials on Ebay) I can understand why you might not go to the effort of testing it. I also have one of the VST two battery cradle chargers that makes it easy for me take charger/charging circuit function out of the equation.
Reactions: LightBulbFun

My TAM works great, I only need a few cosmetic things and a comm slot riser to keep it all in 1 and put it on my network.
W

The 3400 does not need a PRAM to boot. Best to remove it anyway as it is very prone to leakage at that age as is the main battery. I got a batch of three 3400s in a disposal sale among other things and they all had leaked PRAMs. One chimes and boots all the way but the video connection on board is trashed due to acid corrosion. It won't even display over an external monitor.

The other thing that might be an issue is to check the power socket. It may have worked loose from the logic board. I have a spare Kanga that boots one time in a hundred with a loose power socket. Tried resoldering it and now it won't even chime. Bah!
Reactions: MikeatOSX

weckart said:
The 3400 does not need a PRAM to boot. Best to remove it anyway as it is very prone to leakage at that age as is the main battery. I got a batch of three 3400s in a disposal sale among other things and they all had leaked PRAMs. One chimes and boots all the way but the video connection on board is trashed due to acid corrosion. It won't even display over an external monitor.

The other thing that might be an issue is to check the power socket. It may have worked loose from the logic board. I have a spare Kanga that boots one time in a hundred with a loose power socket. Tried resoldering it and now it won't even chime. Bah!
Click to expand...

Thanks for the response-I probably should get PRAMs out of my other 3400c and Kanga also.

I think I'm likely going to move all major charging duties on these over to the VST cradle. It's convenient, and should let me spot a leaky battery before it gets dangerous in the computer. As I mentioned, I've been unbelievably fortunate on batteries for these computers.

Also the power board may need recapped. I think there are 2 or 3 cans on there. mine would not boot until recapped. It works garble noise and the board would high frequency whine.

Thought I'd put up a bit more info on this.

After digging into the computer, I found some damage on the board from leaky capacitors.

With that, I went with my original "backup plan" in case this one did arrive DOA(it was advertised as untested/no charger). My other PB had a serious case of dead pixels around the screen, so I just elected to swap the entire panel unit over to my other(otherwise working computer). So, at least I have one good fully functional 3400c out of the lot.

If nothing else, it was nice to go from this 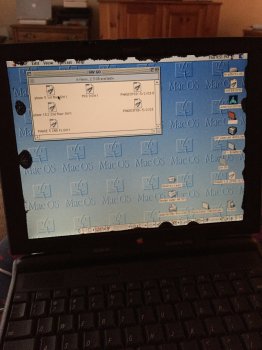 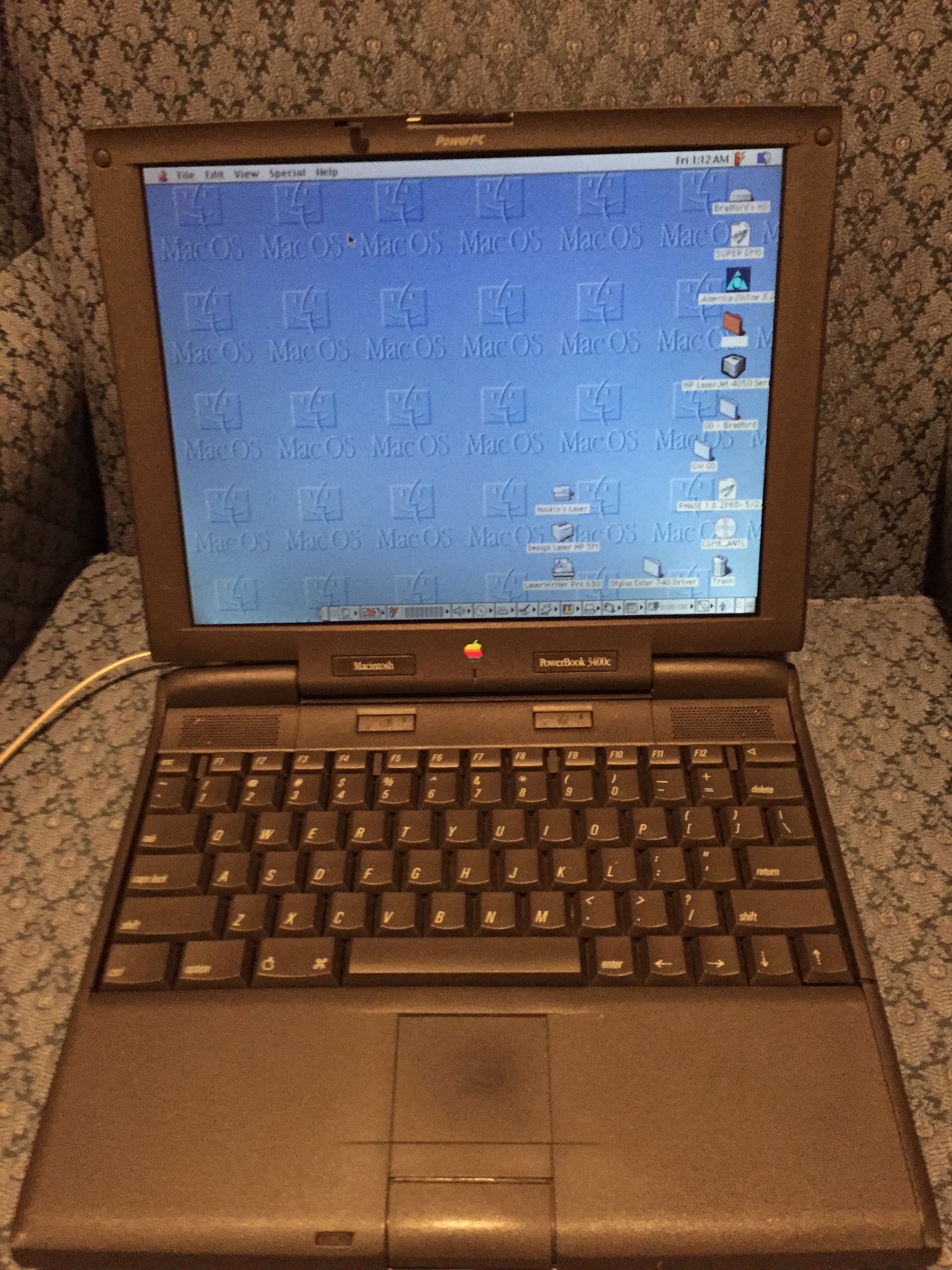 Ive found its acid from the battery that causes baord damage as there is only 1 capacitor on the logic board and 2 or 3 on the power board.
You must log in or register to reply here.
Share:
Facebook Twitter Reddit Email Link
Register on MacRumors! This sidebar will go away, and you'll see fewer ads.
Sign Up
Top Bottom