I'm thinking of getting XP for gaming. I'm in Ireland and am looking for a cheap copy. On amazon they sell for 260 which is more than I'd spend on any OS. I've seen this on ebay; is there any pitfalls of buying like this? and what is the difference between home and pro (in terms of gaming esp.) 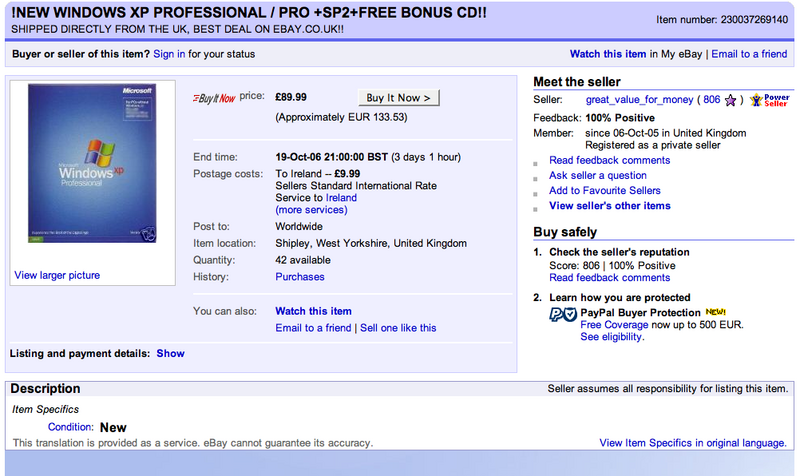 When shopping on eBay, the risk of fraud is always there. Just make sure you are buying from reputable sellers. 806 positives 100% looks good to me.

It probably doesn't make much of a difference if you use Home or Pro.
Comment

XP is $160 CDN with a hardware purchase in Canada. You want the OEM version. Here, a "hardware purchase" just a sata cable or something. The legalities make you at least buy some sort of hardware. So.. total $162 for XP Pro OEM. http://www.memoryexpress.com/index....dProductDetail.php&DisplayProductID=8751&SID=

The reason its that cheap is because its the OEM version of Windows, which is the same, without the fancy box. They normally also come with a power splitter(Well, thats what a lot of companies selling OEMs throw in, like Newegg), which can come in handy down the road if you build your own PCs.
Comment

ReanimationLP said:
The reason its that cheap is because its the OEM version of Windows, which is the same, without the fancy box. They normally also come with a power splitter(Well, thats what a lot of companies selling OEMs throw in, like Newegg), which can come in handy down the road if you build your own PCs.
Click to expand...

FWIW, Newegg no longer requires or even suggests the power cords/splitter.

OEM also gives you no support from MS directly and your license is tied to the machine you initially install it on. Plus you can't use OEM media to install over a previous version of Windows only clean installs are possible.

The OEM version is just as good as the full retail version. Just make sure that you get the OEM version that already includes SP2.

balamw and I disagree on on whether you can move XP OEM to a different computer or not. In fact, I just did that and had to call MS to get a new authorization number. I reported to the MS operator that I was moving an OEM version to a new computer and all he asked was "Will this copy be loaded on more then one computer at a time." I told him no and he provided me with a new authoriztaion number with no problems. In any event, you can not have the same version of XP OEM on two computers at the same time, and that includes even loading the OEM version of two different partitions of the same computer so I have been told. So if you are operating Parallels Desktop and also BootCamp you should have two copies of XP OEM. I have not tried to have both loaded at the same time so I don't know if MS is actually inforcing this.

irishgrizzly said:
I've seen this on ebay...
Click to expand...

I usually use komplett

Oh and you can move an OEM license. I've moved my OEM license from a laptop to 3 other desktops. Using only one computer at a time of course, the laptop was sold off with the new owners license for XP.
Comment

daveporter said:
balamw and I disagree on on whether you can move XP OEM to a different computer or not.
Click to expand...

The only disagreement we have is whether that right is something you should expect from the OEM EULA or not.

I've stated many times that Microsoft is free to ignore what they say in the EULA and elsewhere w.r.t. OEM licensing and may well give you transfer rights on a case by case basis when you call in, even when the OEM license explicitly does not grant you those rights. However, should Microsoft decide to deny you an authorization code when you call in, you may have no legal leg to stand on since that right was not part of the license you accepted with the OEM license.

i.e. sure it may work, but don't expect it to, and certainly don't think that is your "right".