I have several 'Clamshell' G3 iBooks, some of which have the apple logo missing from the top casing. And believe me, finding a replacement is a little like looking for a spare unicorn horn.
Sometimes it's the leaf missing, or the apple, or both.
The following show a few of my clamshells with and without the logo, confirming how this simple embellishment transforms the overall look, and arguably increases it's value - well it would for me anyhow, given the choice of 2 fully serviceable iBooks one with and one without the logo, I would certainly pay a small premium for one displaying the logo.

KeyLime with missing logo - looking somewhat scruffy, with leaf poorly hand painted too. This is the very rare 466MHz model. 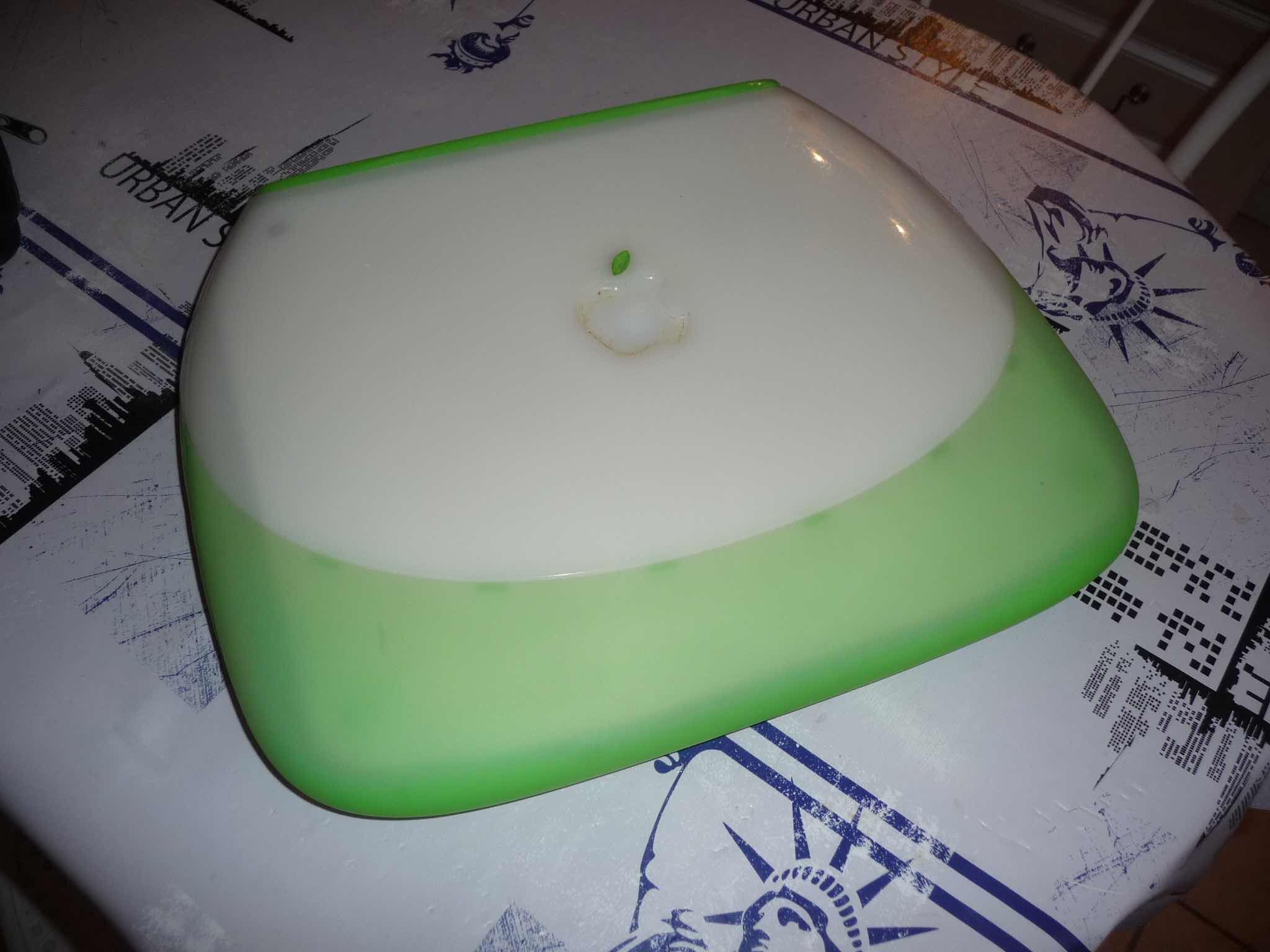 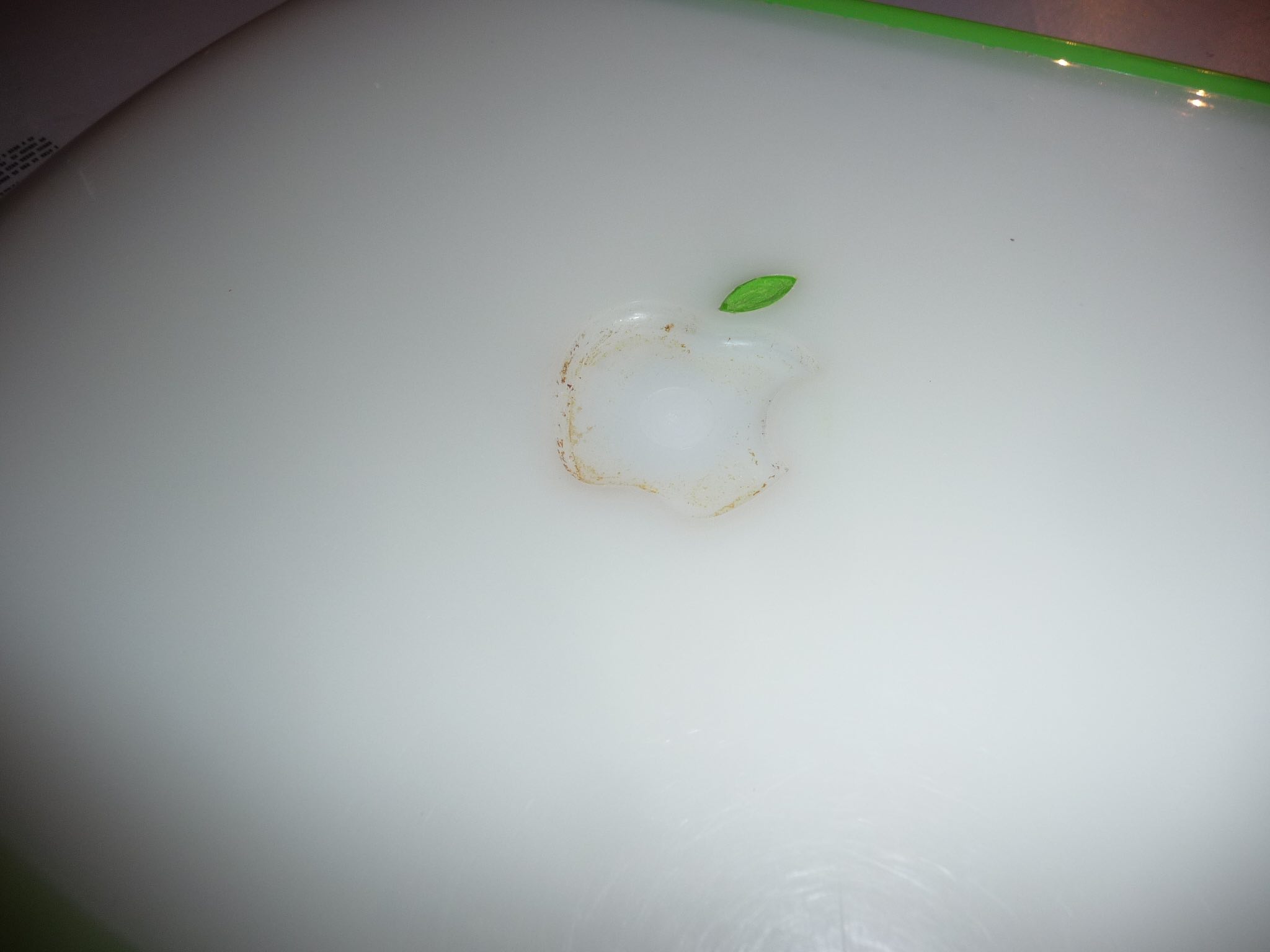 Another complete with logo. Completely ready for action. This is the 366MHz model. 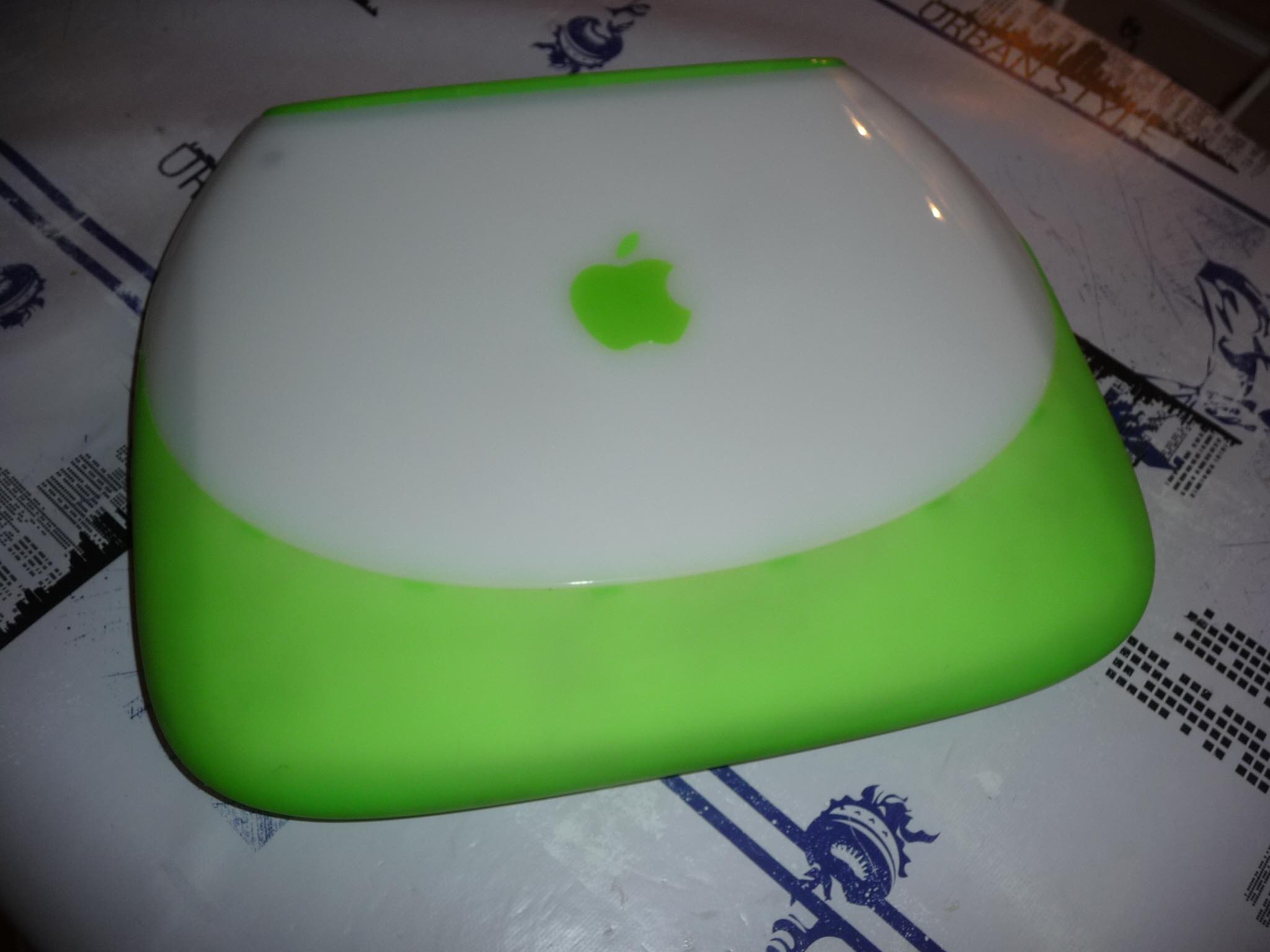 Ditto for the indigo clamshell. 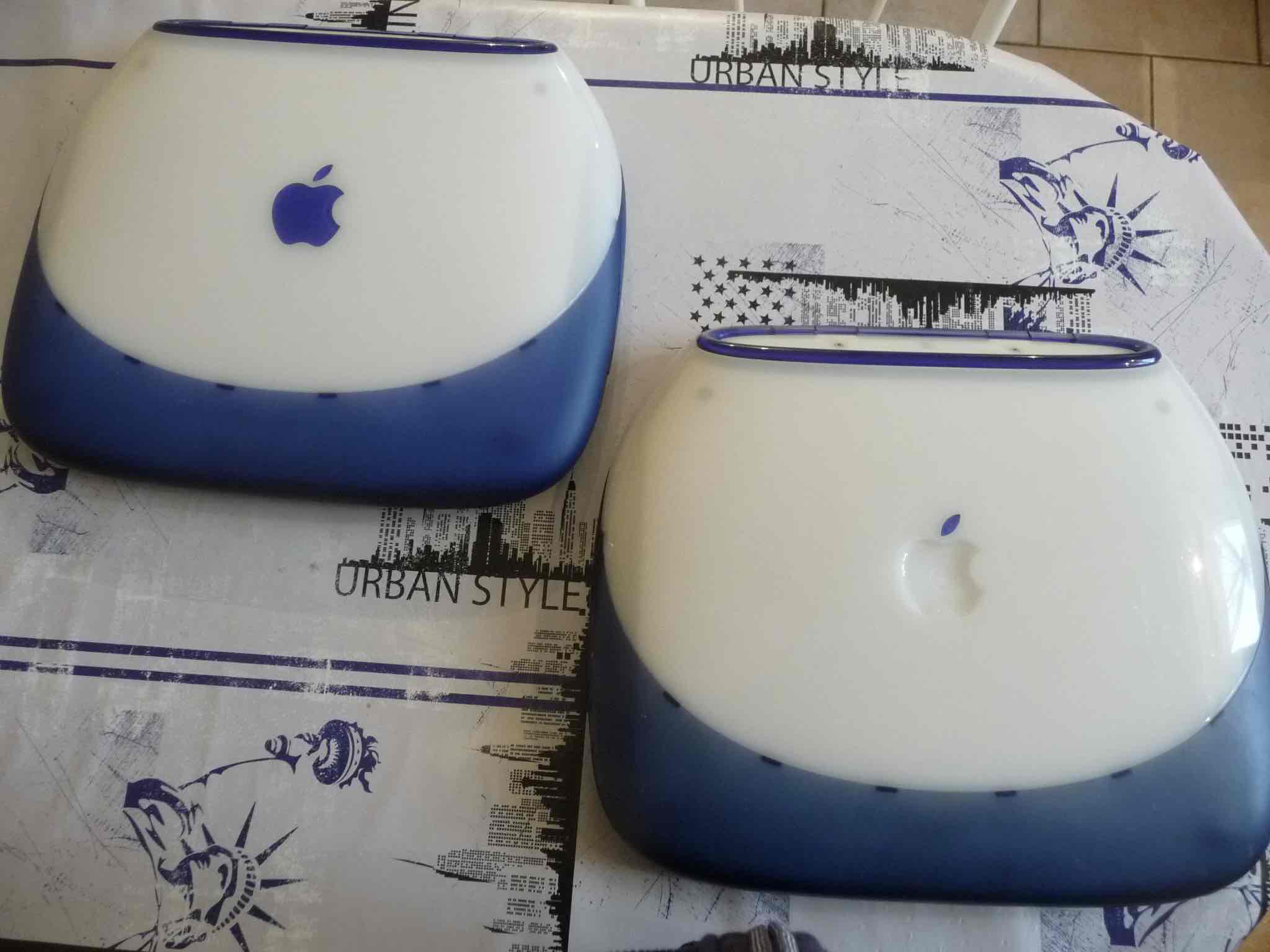 I've often wondered what it would take to home produce a reasonable-looking logo suitable for implanting into the clamshell lid.
In an arts and craft store I found a product called Fimo Soft made by Staedtler. It's a modeling clay which after forming is cured by baking in a domestic oven.
I'm no arts/craft modeling person, but I did give it a try. My first attempt was a disaster. The material was formed ok by pushing into the empty Apple logo socket on the clamshell lid, but became deformed on removal. I then found that by first placing a piece of thin baking film in the empty socket first, then pressing in the modelling clay, it could be easily removed by lifting out the thin film liner. The underside was a smooth, perfectly contoured Apple logo, which was at least a starter. But the top side wasn't smooth, certainly not suitable for exterior display. That initial attempt was a few months ago and due to time restraints (half a dozen collectable Macs and IBM Thinkpads in the wings awaiting re-assembly) I have progressed no further with 'crafting'.
My thoughts were that after baking 2 identical pieces then reworked by halving their thicknesses, then bonding together with superglue would make a suitable replacement with smooth contours on both faces - for the clamshell lid.
I also see there is a liquid form of Fimo, although a liquid resin for casting the logo may be an even more suitable solution. As I say, not being an 'arty' individual my knowledge on fabricating suitable items is extremely limited.
The other possibility is 3D printing. As I noted elsewhere on this forum there are some interesting YT videos showing Apple logos being produced. Anybody reading this care to try their hand and report back?.....

Ideally for someone who has mastered a 3D printer, this could open up the possibility of manufacturing other extremely difficult-to-find parts such as the clamshell optical-drive cover, handles etc.
Hopefully this may stimulate someone else to try any of the above methods. I reckon they could generate a little extra income. I'd certainly purchase half a dozen, or more if the price was correct.
Reactions: tevion5, bobesch, galgot and 1 other person

I did manage to replace the logo leaf only on two of mines, a Lime and a Graphite 1stgen.
With some moldable translucent plastic, found that in a creative hobby store , it come in bricks of differents basic colors. It's plastic like at current temperature, but becomes moldable when left in hot water for a few minutes. By mixing colors you can get what you want. it's the same polymorph stuff that @Dronecatcher post above.
Here a post on my "art" on 68kmla.org :
https://68kmla.org/forums/index.php?/topic/25205-galgots-new-stuff/&do=findComment&comment=285486
now doing the main apple part like that... Never tried.
But i think it wouldn't look so great, cause it as to have a really smooth surface . Easy to do on the small leaf part, but not of the big apple part.
Maybe the solution would be to mold it in clear tinted resin. Make a mold in silicon from an original, tint your clear resin, and pour in the mold.
But that's just saying , doing it might take more time finding the good tint mix to have the correct color would take a few trys, and silicon and resin stuff are not cheap.
Last time i bought a iMac G3 graphite to complete my clamshell colllection, it was of course missing the complete apple logo :/ waited and waited for an graphite apple logo to show cheap on eeebay...
And one day , was fed up, just bought the only one there at 45 €... And the clamshell it was destined to costed me 15 €. I know ... It's completely stupid. But at least i made the leaf myself.
Last edited: Jan 27, 2019
Reactions: bobesch and bjar

If I were so inclined, I would engineer a mold via 3D printer & push the polymorph into that. Let it cool, pop it out & sand the bottom flat with a block or belt sander so it bonds snugly & uniformly to the clamshell.
[doublepost=1548639168][/doublepost]Being as rare as they are, whoever had the gear to do this could make a decent profit selling to refirbers & hobbyists.
B

Came across a you tube of an unboxoxing of one of these this morning, least it looked very similar. They mentioned it was from around year 2000 and looked pretty recent. Just looked, I thought came a crossed it from here (g3 unboxing) but don't see it unless it's down page but just was gonna say, think mentioned the logo wasn't a perfect match color wise with trim. Anyways, pretty sure heard that. Could be wrong but pretty good video, had os9 on start up.
Last edited: Jan 27, 2019
You must log in or register to reply here.
Share:
Facebook Twitter Reddit Email Share Link
Register on MacRumors! This sidebar will go away, and you'll see fewer ads.
Sign Up
Top Bottom