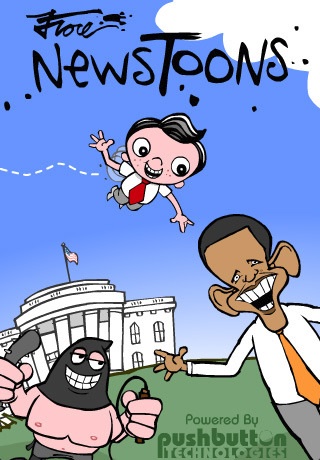 Last week, there was a bit of publicity surrounding Apple's December rejection of an iPhone application highlighting the work of online political cartoonist Mark Fiore, who was awarded the Pulitzer Prize for his work earlier in the week.

After Fiore's disclosure that his NewsToons application had been rejected by Apple last December for "ridiculing public figures", Apple invited him to resubmit his application, and Apple CEO Steve Jobs noted that the rejection had been a mistake.

Fiore resubmitted his application on Friday, and NewsToons ($0.99) is now available in the App Store. The application provides access to Fiore's animated political cartoons, as well as offering links to the news stories that inspired each cartoon.

Nice lesson to all about how the rules don't apply to special people. Way to go Apple. I love you guys, but this sucks.
S

DocStone said:
Nice lesson to all about how the rules don't apply to special people. Way to go Apple. I love you guys, but this sucks.
Click to expand...

Not a lesson, its always been that way in our world. It's just showing us that Apple is no different, which I already knew, didnt you?
D

Know the irony? Mark probably couldn't be happier this app was rejected. Now it's added after much publicity it will sell ten times the amount.
O

I wonder if Apple changed their approval policy or was it just an exception.

We just sent basically same question to Apple to find out if the initial version of Toptop applies to the policy now.

Here you can find what i am talking about (look for screenshots "Main menus before Tiptop was approved by Apple (2 submits)"):
http://thelastmarch.com/press.html
M

Little Fiore was made to grovel and was reeducated.

Big Brother made a point.

Now, all the really little schmucks, shut up and be happy you are allowed to be.

(As long as it's sanctioned by Big Brother)

scottnj1966 said:
Not a lesson, its always been that way in our world. It's just showing us that Apple is no different, which I already knew, didnt you?
Click to expand...

Yeah, I thought so however part of me was hoping that in this area, it would be a bit different. I thought, maybe, that would do the right thing. Change starts with one person you know....
J

win a friggin pulitzer then complain. It's a pretty special thing to achieve. He deserves all the benefits it comes with.

j-traxx said:
win a friggin pulitzer then complain. It's a pretty special thing to achieve. He deserves all the benefits it comes with.
Click to expand...

A pulitzer is a big deal, no doubt. That said however, rules are rules and if they apply to one then they should apply to all unless there was a pulitzer clause in the rules.

I am happy that he won the pulitzer though. I think his work is pretty awesome and I am glad he is in the store with his app. I just don't like how it went down and that is my opinion. If you don't like it, so what - it's my opinion. Thanks for sharing yours.

I am offended by the ridiculing of public figures.
F

so steve jobs made a mistake and apologized.

let me know when any of the following ever apologizes for a mistake
.
barack obama
george w bush
steve ballmer
and a list that would take forever to post.

ps: steve jobs has enough points, in his favor, to be as arrogant as he wants to be but has enough class to address legit (his opinion) problems. and more than once.

fairpro said:
so steve jobs made a mistake and apologized.
Click to expand...

Do you think, just perhaps, that there is more than one employee at Apple?