Pwr on/off screen? Anyone seen it before?

So yesterday, I purchased a new 32gb iPhone 4 from my local Apple Store. After everything was all setup, I walked around the store trying to replicate the "death grip" which I was able to do, mostly anyway. A few seconds go by and a screen pops up, very similar to the incoming call screen.

It was plank at the top where the number usually would go, and below that it said "Pwr on/off". At the bottom was the usual Accept / Decline buttons. The Apple genius immediately said "Oh, hold on a sec" and pressed the "Accept" button, and the screen disappeared. When I asked him about it, he was very very coy about it and said "Oh, it was a diagnostic screen, don't worry about it. It's gone and you won't see it again." I kept asking what the screen was and he kept deflecting the question.

Anyways, much of the screen description was coming from memory, so I'm not 100% sure it was exactly, but it was damn close. I wish I had time to take a screenshot. Anyways, has anyone else seen this screen before? What is it?

Yes, both iphone 4 we bought did the same.
You just have to restart it to go thru registering into AT&T's network once initially setup.
You probably wont see that again. 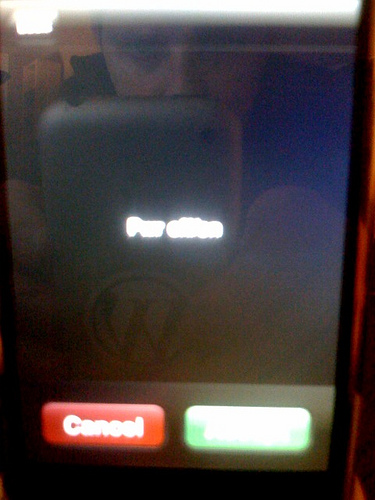 He kept deflecting from the question because he probably didn't know much about it. But it happens with everyones iPhone 4.
A

Thanks Applejuiced and Elysian. Makes much more sense. I just thought it was weird since it didn't happen when my gf's iP4 when she bought it a month or so ago.
M

Applejuiced said:
Yes, both iphone 4 we bought did the same.
You just have to restart it to go thru registering into AT&T's network once initially setup.
You probably wont see that again.

E
Other What do you think of phones with screens with a ratio of 21:9