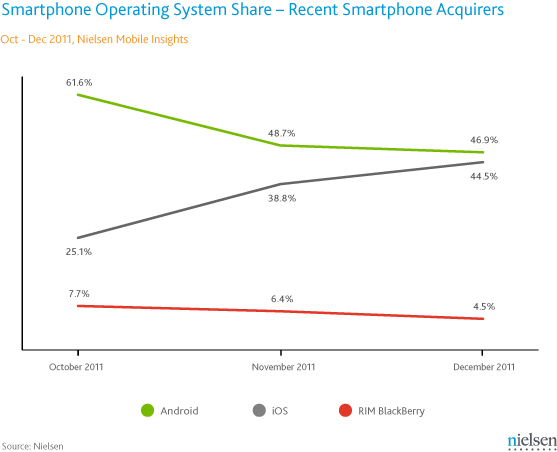 According to the latest research from Nielsen, the high-profile launch of Apple’s iPhone 4S on October 14, 2011 had an enormous impact on the proportion of smartphone owners who chose an Apple iPhone.

Android continues to cling to the lead among all U.S. smartphone users, with 46.9% of all smartphone owners surveyed in Q42011 reporting they settled for an Android-based mobile phone vs. 44.5% who treated themselves to Apple iPhones.

As of Q42011, 46 percent of US mobile consumers had smartphones, and that figure is growing quickly. In fact, 60 percent of those who said they got a new device within the last three months chose a smartphone over a feature phone.
Click to expand...

A couple of things to note:

No, but it's one damn large consumer of electronics (oft needlessly).

US = a massive market, and arguably one of the most coveted. The US market can do wonders for your brand power.

It speaks to the strength of Apple products when with just a couple of models they can capture significant share (all under one roof, never mind tons of OEMs.)

Now, given that, imagine what it means for a product like that to capture majority or near-majority share, in the wake of a market flooded by OEMs running a universally-licensed OS.
C

I don't see what's the problem with a relatively current Android.