Question: when is SATA III better than SATA II?

Wont HDD read and write speeds bottleneck everything before SATA II anyway?
U

Until RW speeds on SSDs can supersede 284MB/s, SATA ii will be fine.

Not for now because write and read speeds do not saturate the SATA-II bus. But new drives in the next couple of years will be bottlenecked by SATA-II. I guess at that time one could install a SATA-III PCI express card.
A

Ummmmm - could some of you provide the bandwidth that high performance striped RAIDs can achieve today?

Answer - sustained throughput of 500 MB/s is out there now.

The max theoretical throughput of a SATA2 3Gbps connection is 275MB/s, however in practice is seems the limit is closer to 228MB/s

The revealing test is this Anand review of the Crucial C300. Note how it gets a 20% advantage in sequential reads on a 6Gbps vs 3Gbps connection... implying it's bottlenecked by the SATA2 connection which tops out at 228MB/s... 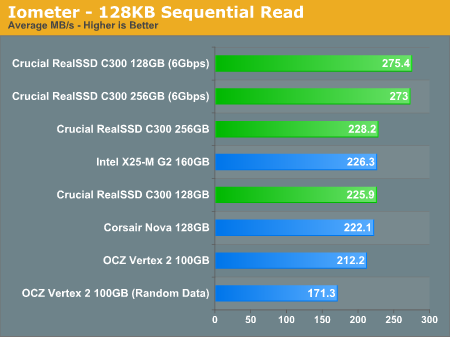 It's hard to say with any certainty, but if the C300 is hitting the SATA2 wall at 228MB/s, it may be the case that most other top shelf SSD's are similarly bottlenecked by the SATA2 or at least coming very close.

Apple Corps... I'm not sure what you are talking about with respect to RAID... each drive in a RAID array typically has it's own 3Gbps SATA2 connection... they're not all sharing one SATA link.
N

Apple Corps said:
Ummmmm - could some of you provide the bandwidth that high performance striped RAIDs can achieve today?

It's already possible to saturate 8x PCIe lanes @ Gen 2.0 (500MB/s per lane), so 4GB/s is actually possible (DAS implementation, without the need for SAS Expanders = one disk per port).

*sigh* now is such a terrible time to be buying a computer.

There's always been effectively two cycles to buy a computer on... Both are good times to buy for different reasons.

1. The bleeding edge... typically coinciding with a new Intel microarchitecture and/or chipset. This is the "tock" in Intel's tick-tock cycle. This is the best time to buy a bit of future-proof but it's also the most costly time to buy a new computer.

2. Between bleeding edge releases... when lots of new stuff is being talked about but none of it is really available... This usually coincides with the "tick" in Intel's tick-tock cycle and usually provides more bang-for-the-buck or value even though your platform will be obsolete sooner.

At any rate, the best time to buy a new computer is always next <week/month/year>... that's just how it goes and the rapid depreciation on most computers means you are always throwing money down the drain!

I kind of agree with you. It's just that I hope the August 2010 Mac Pro isn't the last of the line and that none of your super list ever makes it into a Mac Pro
N

Apple could have decided to do PCB rework for SATA 3 and USB 3.0, as it would have required additional semiconductors added to the board. But there's also the fact that they'd have required PCIe lanes to function (beyond the additional financial aspect to actually do it).

There is no chance in hell that Apple is about to push the professional userbase into buying PCs instead.

And while it is true that the best time to buy a computer is always in the future, I think that right now it especially applies.

SSDs are on the cusp of becoming standard, and they are far faster than any leap in HDD speed we've seen before, they are small, and they generate very little heat and consume far less power than any HDD technology before now.

USB3 is the next installment of a widespread connection interface that only gets updated once every several years.

Nothing like lightpeak has even really been released before, so who knows whether it will end up being significant, but the potential is there.

SATA II is going to start bottlenecking SSDs as they start becoming more standard which isnt that far off.

Nothing like this kind of stuff was happening a year or two ago.
L

Some people will think no time will be the best time to buy one, as there will always be something new around the corner.