So I am having issue opening video files from my Sony camcorders in Quicktime. When I plugged in my Sony DCR-SX41, which records in MPEG-2 and Dolby Digital AC-3, it came up with this weird message saying something about lowering security for audio or something? Not sure what it said, as it only opened once and never showed up again. Anyways, now when i try to open any file from that camcorder, it gives this message:

So I tried to open a file from a newer Sony camcorder i have, the HDR-CX405, which is a AVCHD camcorder, but it also encodes audio in Dolby Digital. Same issue, comes up with the same message. The camcorder does also have a dual video record function, which records a secondary file in an MP4 container with AAC. It would play those files, but the quality is super low in that mode. Weirdly, other apps open the file, so I dont know why Quicktime isn't doing the same.

Upgraded to Catalina, and the problem still exists. However, I was able to get more screenshots of the problem. Please help, I need to view my video files. 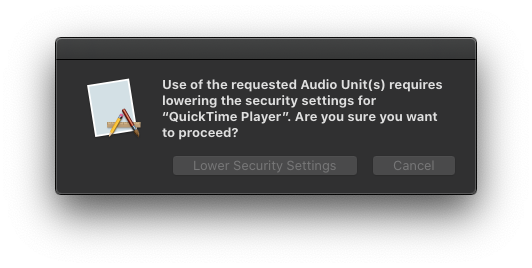 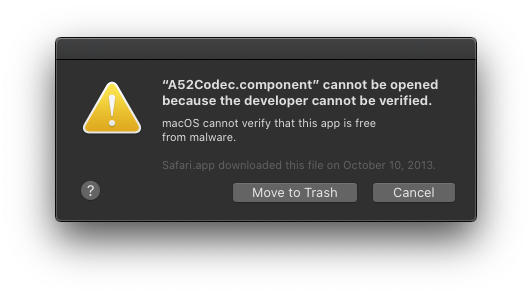 If the goal is viewing you should at least be able to play them with VLC, since that plays almost every type of media. If you need to do something further (editing etc.) then you could try transcoding to another format, Handbrake is good for that.

Have you tried doing anything in System Preferences>Security & Privacy?
S

macOS doesn't play nice with AVCHD directly. You need to transcode it. iMovie should recognize the camera/card and allow you to transcode the video.