Recovery from a coffee spill - rMBP

I have a Retina MacBookPro from June of 2012. I carry this laptop everywhere and use it daily. Well I did until I spilled a cup of sugared coffee onto it last September. I turned the laptop upside down, powered it down and used tissue to soak up the free coffee.

This really ruined my day.

Long story short, after letting the laptop sit for a week to dry out, I powered it up and I was pleased that it ran without apparent damage.

However it was not long until I found that some of the keys would stick and have to be tapped to free them up. The key sticking just got worse over time.

So what is a hacker to do? Well I elected to attempt a repair.

I purchased the pent-lobe driver to remove bottom cover and a good set of small torx drivers (most internal screws are T5). So here is a shot of the laptop with the bottom cover removed.
. 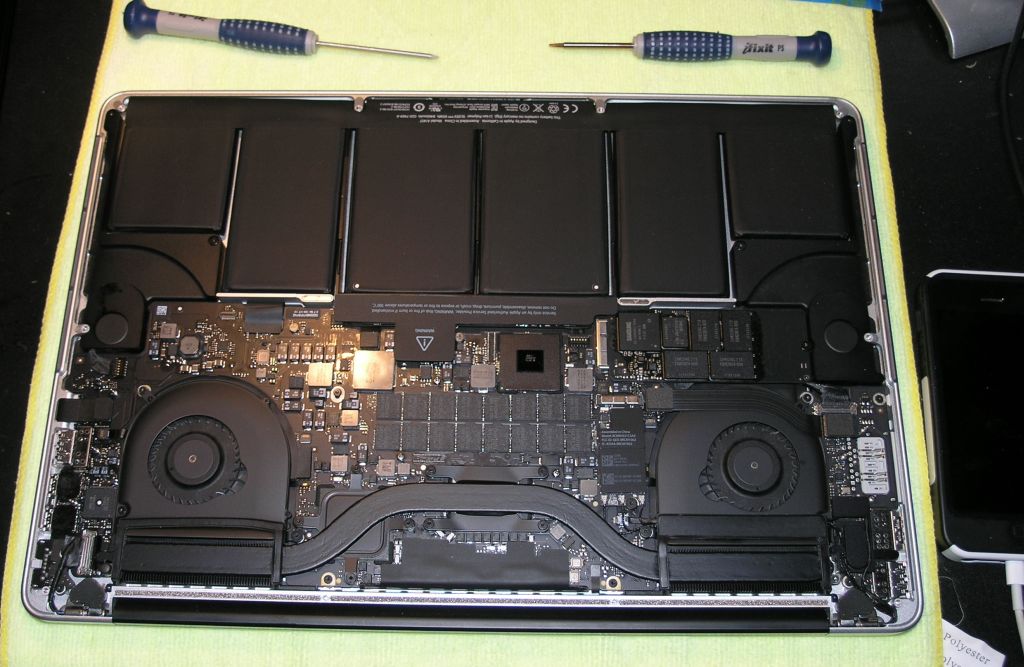 .
And this is after I diss-assembled the system down to the lower case with keyboard and battery remaining (the battery is glued into the case and I elected to not attempt to remove it).

The black and silver cover laying across the battery is the internal keyboard cover. This is an active part with a ribbon cable connection to the motherboard. It forms a perimeter seal and kept the coffee from reaching the logic board area. I worried the adhesive and carefully remove it as shown.
. 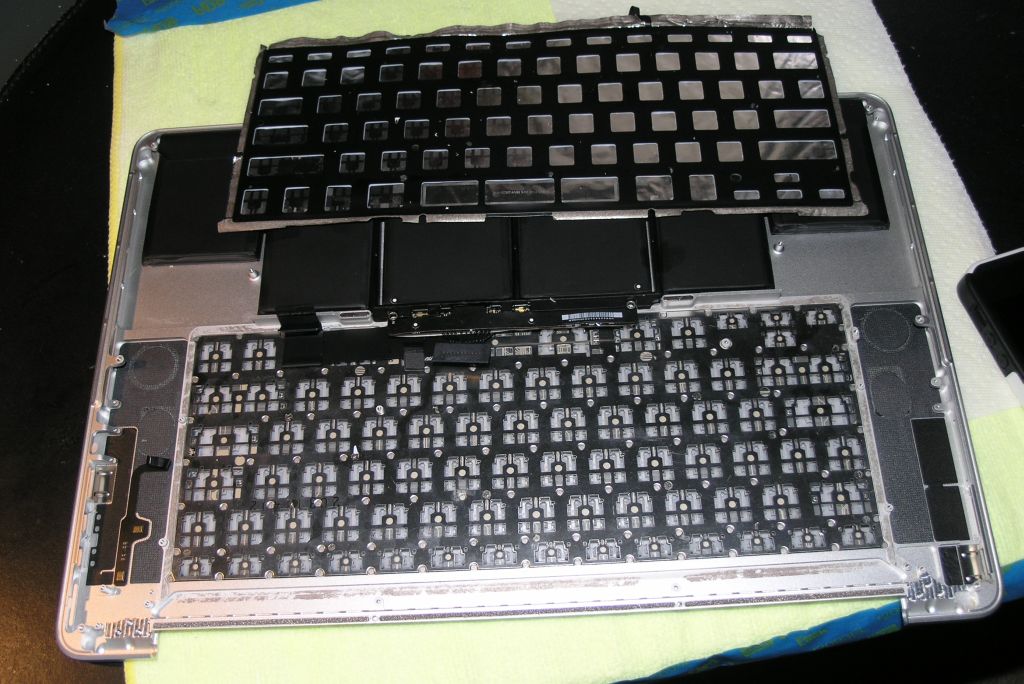 .
I spent a fair amount of time masking off the left and right grill areas and masked the battery controller area. I used plastic electrical tape for the masking.

Then at my kitchen sink with a good hot stream of water running, I washed the keyboard area from both sides for about five minutes. I also used a small soft bristle brush. Then I used paper towels to soak up the remaining water and removed the masking at this time drying where water had leaked into the masked area.

I followed this up using facial tissues to remove more water.

Then I let the assembly set overnight. Before reassembling.

This is the logic board... very small, components on both sides, 16GB of memory. I did note that Apple used way too much thermal compound which I corrected. The system should run cooler with my reassembly.
. 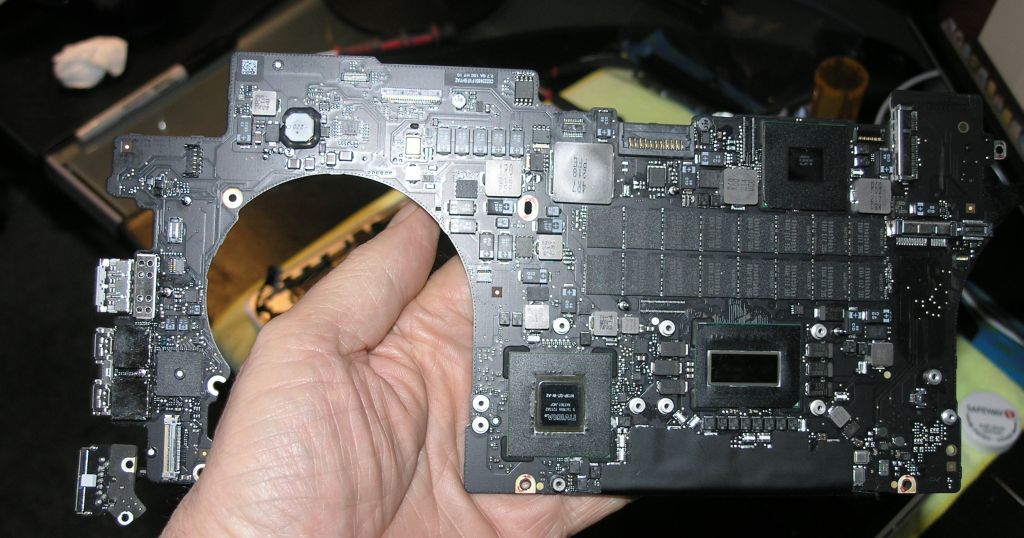 .
This is the start of reassembly which took a good amount of time as there is an order which must be followed (and I had to back up a few times).
. 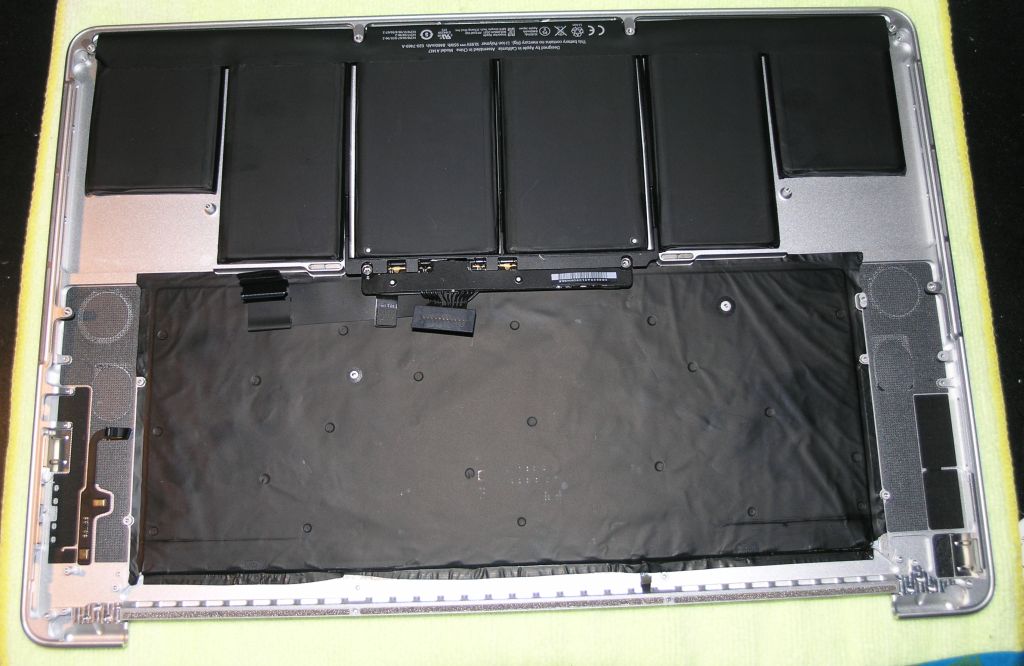 .
However I finally got it right and here it is back together just before replacing the bottom cover.
. 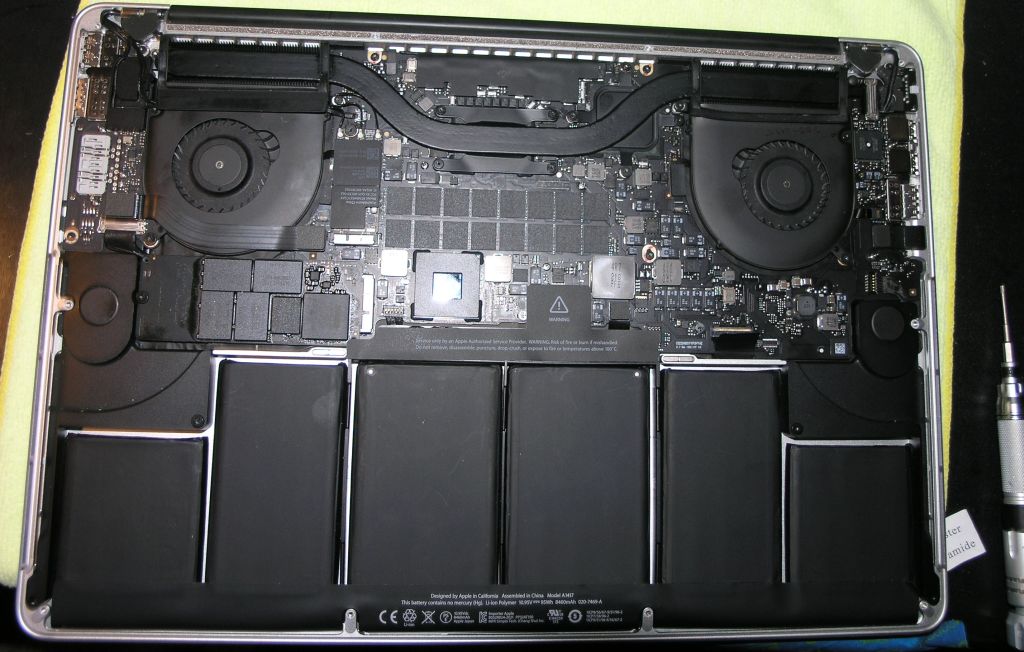 .
I was greatly pleased when the system booted and checked out 100%. Prior to this, I had visions of having to replace the system. I used the "iFixIt" web site for the tear down and re-assembly aids.

Have a good EOY,
neil
M

Very good job, OP. Apple should have hire you.