Apple could skip adding new health sensors to this year's redesigned Apple Watch Series 7 in favor of improving the battery life of the device, based on rumors and recent reports. 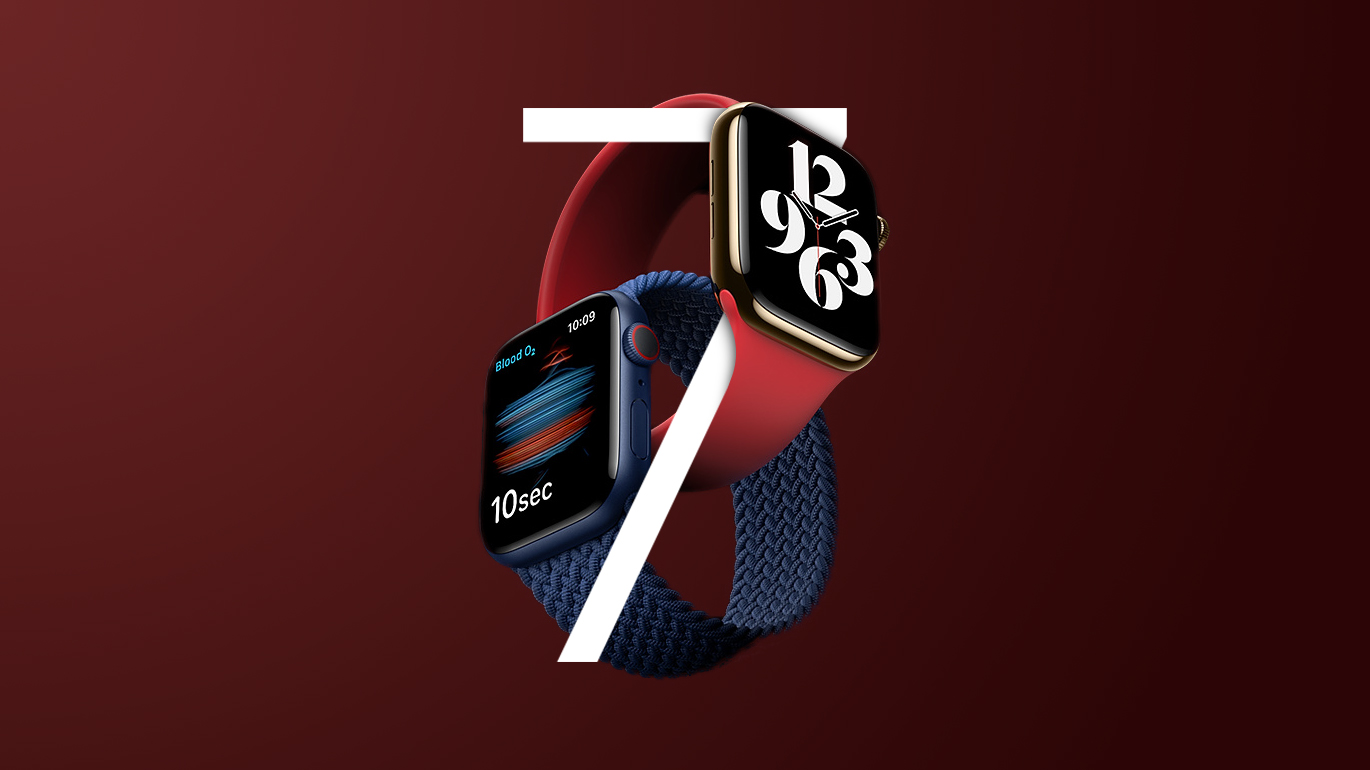 According to well-respected Apple analyst Ming-Chi Kuo, the Series 7, expected to drop in September, could feature the first significant redesign the Apple Watch has had in several years. As part of the redesign, which could include a flat-edged case that's similar to the iPhone 12 or the iPad Pro, Apple is also said to be adopting new double-sided System in Package (SiP) technology to reduce the size of the processor.

A new report from the Economic Daily News notes that the smaller "S7" chip will free up internal space for a larger capacity battery or additional health sensors. However, Apple is expected to delay the introduction of other sensors until 2022 at the earliest, according to multiple reports from sources with a high accuracy for predicting Apple's plans.

According to Bloomberg, Apple is working on a way to bring blood glucose monitoring capabilities to the Apple Watch using a non-invasive optical sensor, but it will not be ready for commercial launch for several more years. Apple was also considering adding a body temperature sensor in the 2021 Apple Watch, but Bloomberg says it is instead likely to be introduced in the 2022 update.

With the redesign expected to allow Apple to either retain the size of the current generation model or slightly thicken it – albeit not in a way noticeable to the user – this could leave ample room for Apple to increase the battery capacity inside.

Apple advertises the Series 6 as offering all-day battery life up to 18 hours. Apple bases "all-day" estimates on 90 time checks, 90 notifications, 45 minutes of app use, and a 60-minute workout with music playback via Bluetooth. Unlike other Apple products like iPhones, however, this claim has been consistent since the Apple Watch Series 1 through to the latest model.

One rationale for prioritizing increased battery life in the Series 7 is that Apple could heavily promote the improvement in order to lure owners of older Apple Watch models to upgrade. This could be particularly attractive to users whose Apple Watch battery life has gradually deteriorated over the years due to chemical aging.

Increasing the battery capacity could also allow Apple Watch to better compete with rival smartwatches that tend to promote their multi-day battery life as a tentpole feature, such as the Fitbit Versa 3, which can operate for over six days on a single charge.

Aside from potential battery improvements, Apple Watch Series 7 is also expected to feature improved wireless connectivity, an improved U1 Ultra Wideband chip, thinner display bezels, and the use of a new lamination technique that brings the display closer to the front cover, with updated screen technology.

“Apple delays features for the Apple Watch Series 7 so that they will have something to sell for the Series 8.”

I have used Apple Watch since the first generation in 2015 and I’ve upgraded every generation or 2 since then. The battery life has never been a concern for me. I just charge it overnight during sleep and at the end of the day it’s down to around 40-50% always.
I’d prefer more sensors than adding battery life UNLESS they can make it to last 3-4 days.
Last edited: Jun 28, 2021
Reactions: xodh, UltimaKilo, justin0712 and 35 others

Battery life is my main gripe, still using a series 4 (which actually lasts for a significantly shorter time than my series 3 did)
Reactions: lk400, Someyoungguy, al256 and 11 others

Unless their chip drains minuscule amount of power (20mW or less) during “heavy” loads, any claim by apple or full day battery life is going to be exaggeration of varying degrees.
Reactions: justin0712, SqlInjection, Surrix and 1 other person

My Series 4 battery had deteriorated to 82% capacity; even now, it lasts a full day, no exceptions, even if I use the 4G modem and record a training session. I'd take the extra sensors over a better battery.
Reactions: iksnirks, cbeon, siddavis and 9 others

Got a used Series 5 and it lasts me 2 days of normal use when the always-on feature is turned off. Which is nice since I don't have to bring the charger cable when spending the night at the girlfriend's.

To keep the battery fit, try to keep it between 20 and 80%, ideally around 50%. Popping it on the charger during the morning routine (shower, hair, teeth, etc.) usually puts enough juice back in it to last for a day and night.
Reactions: kytiger and One2Grift
M

They need to prioritise Qi charging.
Reactions: Razorpit, BugeyeSTI, _Spinn_ and 3 others

Been wearing an Apple Watch every day since April 24, 2015 and never had it run out of battery a single time. Battery life is fine for me, add additional sensors and make the Watch thinner please.
Reactions: Elmo1938, Jovijoker, BulkSlash and 4 others
F

battery life is a non-issue
Reactions: StyxMaker, Elmo1938, Jovijoker and 8 others
X

I look forward to that. I've got a series 6, and battery lifetime is a bigger problem now than it used to.

Before series 6, there was a routine of putting my watch on the charger before I went to sleep. Now that I sleep with my watch on - for alarm and sleep tracking - I don't do that anymore. If I wasn't at the home office, the watch would be empty many days - and unlike an iPhone, there's not a whole lot of recharging opportunities.
Reactions: Someyoungguy

This would be appreciated. I would like to take advantage of the sleep tracking feature but I have to charge my dang watch some time.
Reactions: BulkSlash and MrFootery

If only the battery charge would last a year or more..
Reactions: SFjohn, AbsoluteAnointedOne, Jovijoker and 1 other person
J

Never had an issue with battery life. Would prefer tangible features.
Reactions: Jovijoker, BulkSlash, Agile55 and 1 other person

The SE watch needs to be a notification enabled, music playing watch. No fitness, no gizmos.

As Tom Papa says, we need to move past the notion that everyday movement is exercise. You either workout or you don't.

haruhiko said:
“Apple delays features for the Apple Watch Series 7 so that they will have something to sell for the Series 8.”

I imagine there are very few people who buy a new Watch every year. I haven't found a survey, but I'd guess the average is somewhere between 2 and 4 years.
Reactions: Razorpit, BulkSlash, MrFootery and 3 others

My SE lasts more than a day, even when I workout thrice a day. Granted, I have almost no notifications and certainly no social media apps on it.
Reactions: Jovijoker
T

haruhiko said:
“Apple delays features for the Apple Watch Series 7 so that they will have something to sell for the Series 8.”

I have used Apple Watch since the first generation in 2015 and I’ve upgraded every generation or 2 since then. The battery life has never been a concern for me. I just charge it overnight during sleep and at the end of the day it’s down to around 40-50% always.
I’d prefer more sensors than adding battery life UNLESS they can make it to last 3-4 days.
Click to expand...

This.
I actually think knowing that it lasts a day rather than... 3 days or so can be an advantage.
For example: I know my Apple Watch will last ONE day. I put it on the charger every single night when I go to bed. It's a ritual like brushing your teeth.
Speaking of which... my electric toothbrush lasts around 5-7 days so I don't have to... and shouldn't charge it every day. As a result I forget charging it every few weeks... and find an empty toothbrush the next day. This has never happened to my Apple Watch.
Reactions: Canyonero, Jovijoker, ZZ9pluralZalpha and 7 others

chucker23n1 said:
I imagine there are very few people who buy a new Watch every year. I haven't found a survey, but I'd guess the average is somewhere between 2 and 4 years.
Click to expand...

Probably. My wife has a 4, I will certainly get her either the 7 or the SE2.
Reactions: Jovijoker

pauloregan said:
The SE watch needs to be a notification enabled, music playing watch. No fitness, no gizmos.
Click to expand...

The Watch started out that way, with far less focus on fitness. It turned out that either Apple didn't make a compelling case, or it wasn't what people wanted. They wanted a high-end fitness tracker with other features on top. And that's what the Watch is now, and it's pretty good at that.
Reactions: Razorpit

Unless they improve it to DAYS I don’t see the point. What does 1,5 days for example being me? I rather start every day with 100% and know for sure it will last me all day instead of continuing day 2 on 43% or something like that and hoping it will last.

same reason I never got the discussion about the iPhone either. Who wants to leave the house in the morning with 40% battery? I always start on 100% to be on the save side. As long as a device lasts me until bed time, I am good. I’d charge it to 100 anyway
Last edited: Jun 28, 2021
Reactions: ijbond, debusoh, kyte and 12 others

Will apple send out letters to Ming-Chi Kuo and mark gurman? Since they sent letters out to other leakers telling them to stop or they’ll get lawyers involved. ?
Reactions: TheYayAreaLiving 🎗, Jovijoker and Lemon Olive
S

MacRumors said:
the Series 7, expected to drop in September
Click to expand...

I see we are talking like YouTubers around here now.
Reactions: Razorpit, MacCheetah3, Jovijoker and 4 others

Battery improvements and a new design would be great, but it would be very disappointing if we don't have at least one new health sensor.
Reactions: Jovijoker, BulkSlash, _Spinn_ and 7 others
A