Apple is working on a new "Custom Accessibility Mode" for iPhone and iPad, according to evidence uncovered by 9to5Mac in the second iOS 16.2 developer beta. 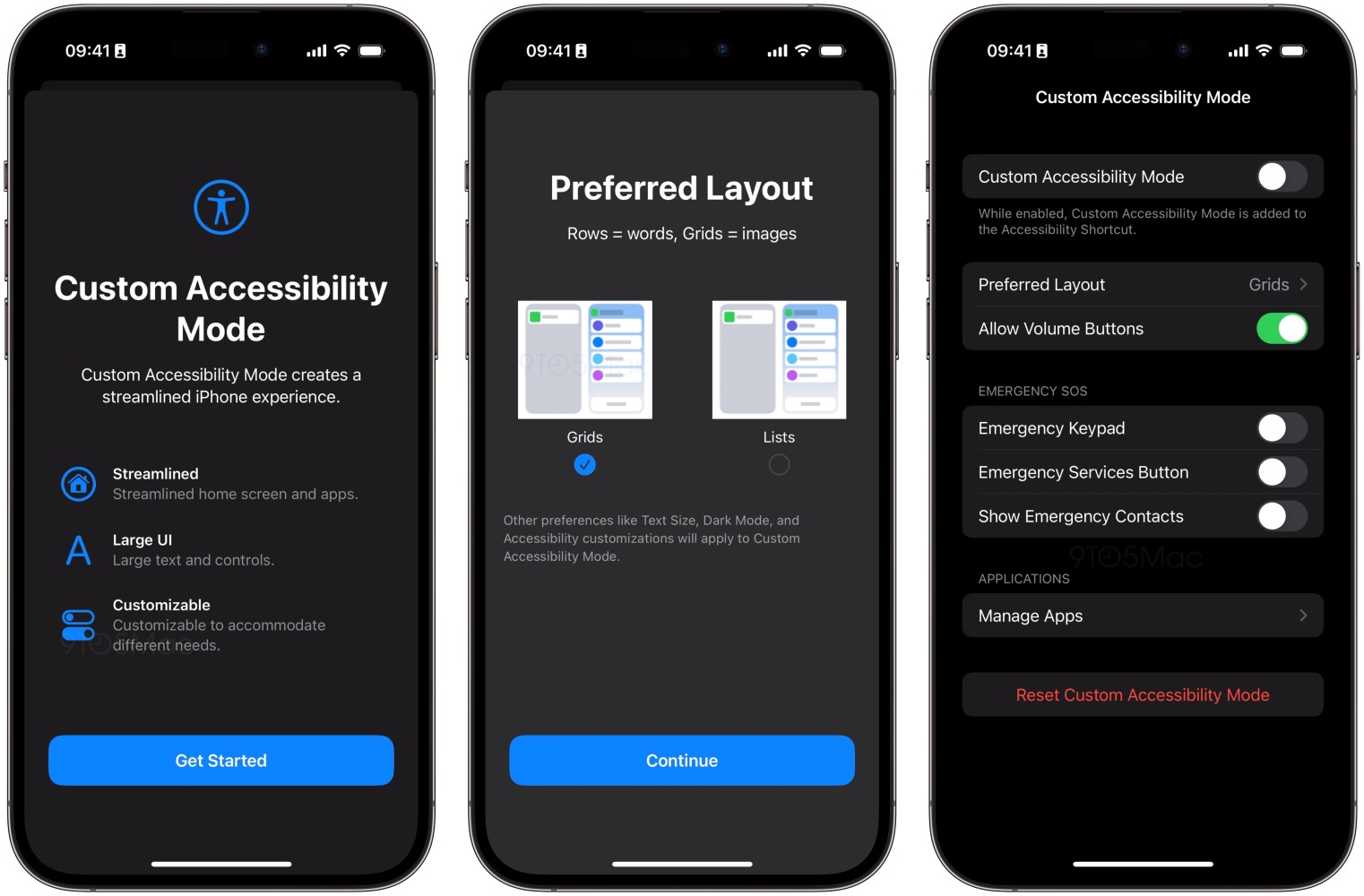 Image credit: 9to5Mac​
Apple released the second betas of iOS 16.2 and iPadOS 16.2 to developers on Tuesday, including camera bug fixes, support for 5G in India, a Medication widget, and references to the new Custom Accessibility Mode, which 9to5Mac found "under the hood."

Within those references, Apple describes the new mode as offering "a customizable, streamlined way to use your iPhone and iPad," although how the feature works isn't completely clear, as it is not yet enabled for developers to test. 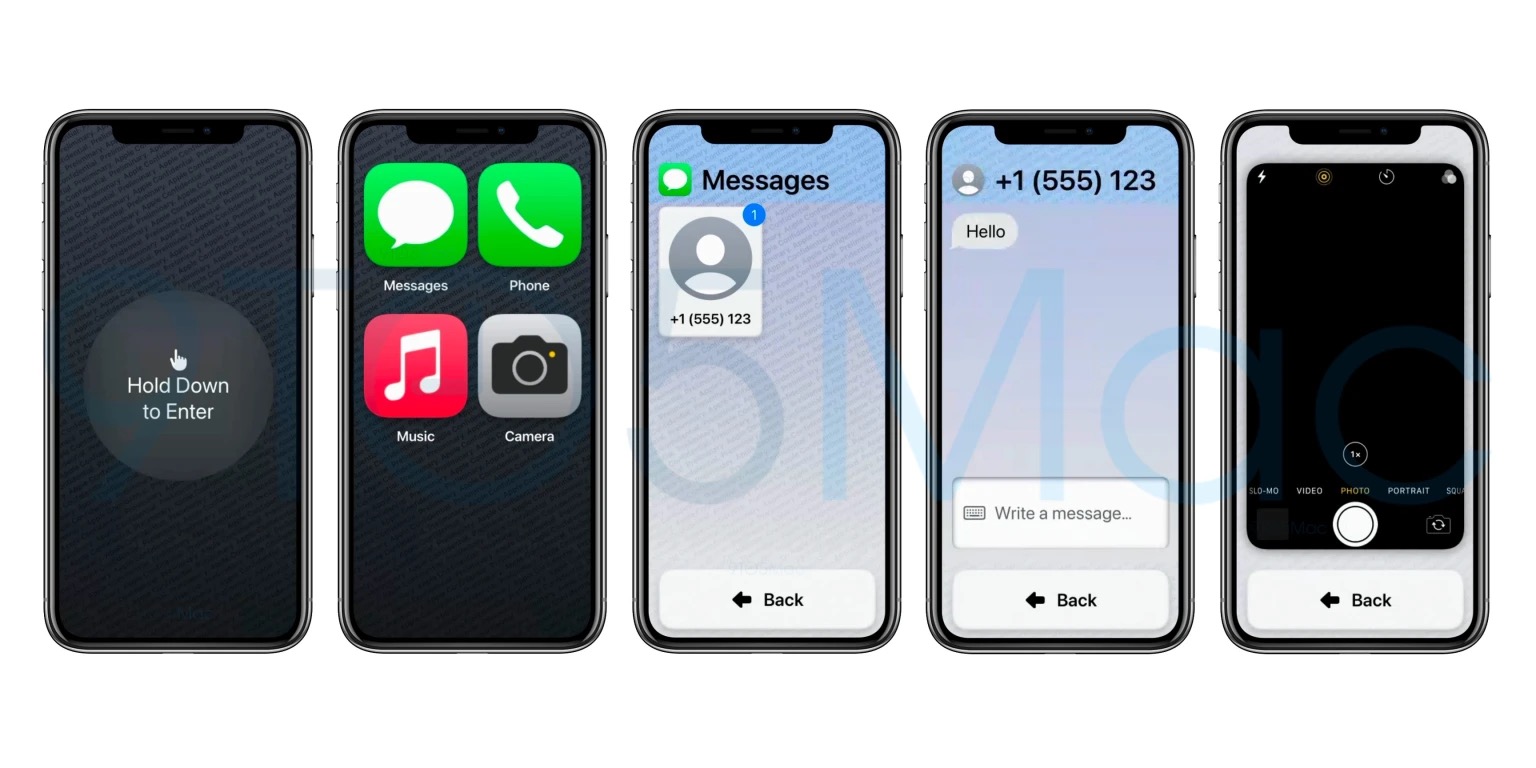 Image credit: 9to5Mac​
Given the dearth of references, it's not certain that the Custom Accessibility Mode will go live with the release of iOS 16.2. Apple could be just laying the groundwork, with the feature still in the early stages of development. For everything else in the second beta of iOS 16.2, be sure to check out our roundup of changes.

If this comes to fruition, it will be immensely helpful for The Olds.

iOS has become so dainty and precious it takes a lot of time and manual dexterity to do many simple and common things.
Reactions: !!!, MisterSavage, MiniApple and 19 others

Really cool, but would also be nice to replace the camera/flashlight and also add other icons at the bottom as well.
Reactions: !!!, MiniApple, sorgo and 7 others
M

This + VoiceOver will be great for partially sighted and blind folks. being able to strip out unnecessary UI clutter makes the screen reader much more efficient.
Reactions: !!!, MiniApple, centauratlas and 1 other person
B

Immediately reminded me of the Jitterbug phones for old people. 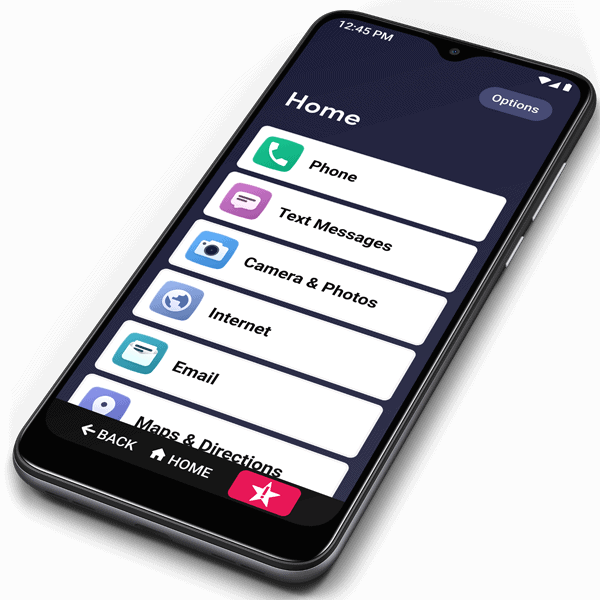 I hope they add option to turn off app library and -1 home page widget. Useless. Infact they should just keep icons that morph to widgets (of different size) if we want.
Reactions: MiniApple, randot and Huck

now i see it said:
Completely change the look of iOS?
Not-a-chance
Click to expand...

Right? Especially on a 16.X release. Seems more like something for iOS 17 a year from now
Reactions: KeithBN

I have a feeling the kind of person who needs this would be better served by a feature phone, but there’s no reason why they should miss out on the advanced features of smartphones.

Hope it allows for smaller and more icons on the screen, if it’s gonna do larger ones.
A

Steve is turning in his grave right now
Reactions: sorgo, miguel cortez, David1964 and 2 others
B

AppleTree01 said:
Steve is turning in his grave right now
Click to expand...

This is an accessibility option to help people to use the iPhone who otherwise might be unable to.
I’d say it’s something Jobs would welcome.
Reactions: MiniApple, iAppleiPhone, sorgo and 12 others

Apple doesn’t get the credit it clearly deserves for its accessibility efforts. My father had a terrible tremor, so gestures were difficult for him. Thank God Apple made an assistive touch function, or else he wouldn’t have been able to use a phone.
Reactions: twocents, riverfreak, sorgo and 10 others

This reminds me of Easy Mode on Samsung smartphones to help make things easier for older people. It puts the most basic functions front and center.
Reactions: MiniApple, sorgo, compwiz1202 and 3 others

Looking at the screenshots, I see one of (apparently) the Lock Screen which has the user hold the screen to unlock. That seems like something that could accidentally happen in a pocket.

Perhaps Apple could re-use "slide to unlock" to prevent that.
Reactions: compwiz1202 and TomaxXamot

Good news. We need to be able to put the magnifier tool on the lock screen as well.

Also, just another plug for the idea of creating a dedicated accessibility subforum in MacRumors (see https://forums.macrumors.com/threads/accessibility-forum.2333471/).
Reactions: MiniApple, riverfreak, sorgo and 3 others

bulbousnub said:
Immediately reminded me of the Jitterbug phones for old people.

This is amazing - it looks exactly like what I was mocking up in my head all weekend for my father, and feeling frustrated that it’s something I didn’t think Apple would ever build. iPhones have gotten much harder to use for older people over the last few years. Neither of my parents ever fully adapted after iOS 7 made UI controls much less obvious and clear. And as my Dad’s tremors have gotten worse, the gestures, edge swipes, and long presses essentially make his phone a minefield. Existing accessibility options help a bit, but don’t do enough to fundamentally fix the big-picture UI paradigms that are an issue for older users.

We need options for huge home screen icons and/or a list view with large labels for the homescreen, a way to prevent accidental rearranging, a way to disable control center and the other edge swipe gestures, and a much simpler way for a family member to control your screen from FaceTime (he doesn’t under stand how to share screen from FaceTime, and the button icons are absolutely inscrutable). And frankly, this mode should offer dramatically fewer features. For Photos.app, just let it be a big picture frame with a way to scroll backwards in time through the grid view; hide all the UI about albums, organization, and editing. It’s so overwhelming to people who don’t or can’t keep up with so many new changes every year.

I tried to talk to him about a Jitterbug Smart, which I think is solving a lot of these issues, but we’ve been an Apple family since 1984, and he doesn’t want to give it up (and when I showed it to him he said “but those are for old people”…he’s 82). And I have a sneaking suspicion that once you’re past the Jitterbug’s launcher, the apps themselves will be the typical Android hard-to-use UI, so it’s not complete win.

Apple built its reputation on ease of use, and people used to marvel at how babies could pick up and use an iPad. You don’t hear that anymore. For myself, I want all the gestures, shortcuts, automations, and power user tweaks I can get my hands on. But I don’t want that to come at the expense of a worse experience for others. iPhone needs a way to accommodate our parents. Really hope this pans out.
Reactions: S G, MiniApple, riverfreak and 6 others

Years ago there was a bug that disabled OS animations. It made transitions instantaneous. We need that again.
Reactions: MiniApple, sorgo, macsplusmacs and 3 others

This will be great for my mom who suffered an aquired brain injury years ago and has trouble using her iPhone sometimes.

If it’s easy to quickly turn off and on, the larger icons could also be potentially useful for people with old cars that have no infotainment display. People that use their phone mounted on the dash while they drive.
Last edited: Nov 9, 2022
Reactions: MiniApple, riverfreak, Xand&Roby and 2 others

We need options for ... a way to prevent accidental rearranging...
Click to expand...

Agreed. My visual and motor impairments are minor and I accidentally trigger the rearrange option about once a day.
Reactions: S G, sorgo, randot and 1 other person
M

cupcakes2000 said:
Hope it allows for smaller and more icons on the screen, if it’s gonna do larger ones.
Click to expand...

that would be super cool as well! good one.

Instead of an Android-like "Back" button, Apple could put a circular software Home button in its place, which would produce a haptic when pressed. It would help ease the transition for people (especially seniors) coming from older iPhones with home buttons, especially if they plan to release a new iPhone SE based on the Xr's design.
Reactions: compwiz1202

AppleTree01 said:
Steve is turning in his grave right now
Click to expand...