OK here's the deal. I am FAR form being a professional photographer. But I took some pictures at my cousins wedding last weekend. I edited one and sent it in a text to her and a couple other cousins. No watermark on it. Apparently one of them went to get some other pictures developed at Wal-mart and wanted a print of this one so she just added it to her SD card and took it in. Which I have NO problem with them doing. Well apperantly the people there think that it WAS done by a professional, and need me to write a letter or sign a release or something for it. Which I don't understand since it doesn't have my watermark or name on it, so how will they know it is mine?

So my question is, is there some sort of basic template that can be used for this? or a certain way I need to type this letter or release form out?

Here is the image 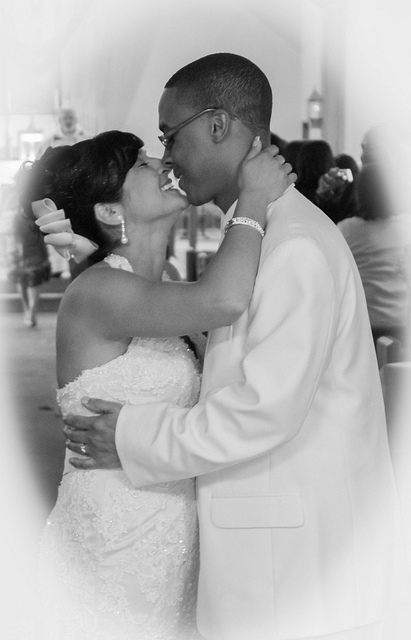 "I am the photographer of this photo, taken [date, place, so-and-so's wedding] and I give [person's name] permission to make prints of this image."

Date it, and sign it, put your name on it as well, and your contact info. Also clip a small print of the photo in question, or just print it on the letter.

I'm sure Walmart will accept something like this, they probably just need to have a letter (any letter) on file. As a professional photographer I am pleased that Walmart is protecting what might have been another photographer's intellectual property.

I have no idea why a general printing facility like Walmart would ask for this. Maybe they have rules prohibiting the printing of material they deem commercial without a release.

Here is a link with basic info on when a release is needed. There are release forms in links down the page. Scroll down to "Where to Get Photographic Model Release Forms".


release forms in an article from Better Photo

Designer Dale said:
I have no idea why a general printing facility like Walmart would ask for this. Maybe they have rules prohibiting the printing of material they deem commercial without a release.

Here is a link with basic info on when a release is needed. There are release forms in links down the page. Scroll down to "Where to Get Photographic Model Release Forms".


release forms in an article from Better Photo

I remember reading about some of those court cases. Especially the one about the photographer taking photos of his kid taking bath. But I don't think it's the case here. A few years ago wedding photographers (especially) made a big fuss about people scanning and printing their wedding photos. Many photographers made a substantial income providing prints from the wedding. As you know a tremendous amount of time can be spent on the post processing, and once a wedding photographer has spent the time pre-wedding, wedding, post processing, and the post wedding presentation they weren't even cracking minimum wage (at least in those states that have a minimum wage) so they counted on those print orders to finally start making a profit.

The printing was as easy as pushing a button, because they had already done all the work to make the print flawless on spec. and on the gamble that the client would order enough prints to cover the post processing time spent on the entire album. So... when people started bypassing the photographer and going to Walmart (and other chains), they (the photographers) raised a stink and made sure that the chains assumed that the copyright was still held by the photographer.

I don't know why I'm telling you this? Aren't you one of the photo gurus around here? I usually take what you say as being the definitive word on the topic.

Anyway, all of this is from memory, and from a "Photography and the Law course I took nearly 20 years ago, and where the lawyer had to explain the differences between Canadian and American copyright law.
Comment
You must log in or register to reply here.
Share:
Facebook Twitter Reddit Email Share Link
Register on MacRumors! This sidebar will go away, and you'll see fewer ads.
Sign Up
Top Bottom