Last week, we noted that some Retina iPad mini displays were exhibiting image retention issues, while in general other users were expressing some dissatisfaction with the color gamut of the Retina iPad mini's display, particularly compared to that of the iPad Air.

In an extensive review of the Retina iPad mini, AnandTech came away extremely impressed with the device but cited that color gamut issue as a significant disappointment.

Although display resolution is no longer a concern on the mini, color gamut hasn't changed between the old and new minis. [...]

The iPad mini with Retina Display has the same color gamut as the standard iPad mini, which is narrower than the iPad Air and less than the sRGB coverage we normally look for. The biggest issue here is that there are other smaller tablets in this price range that do offer sRGB coverage (e.g. Nexus 7, Kindle Fire HDX 8.9).
Click to expand...

[T]he iPad mini with Retina Display unfortunately comes in with a distant 3rd place finish behind the innovative displays on the Kindle Fire HDX 7 and new Nexus 7 because it still has the same small 63 percent Color Gamut as the original iPad mini and even older iPad 2. That is inexcusable for a current generation premium Tablet. The big differences in Color Gamut between the Kindle Fire HDX 7 and Nexus 7 and the much smaller 63 percent Gamut in the iPad mini Retina Display were quite obvious and easy to see in the side-by-side Viewing Tests. [...] This all appears to be due to incredibly poor planning. Instead of moving up to the higher performance (and cost) Low Temperature Poly Silicon LCDs, Apple chose to continue gambling on IGZO, which has resulted in both production shortages and inferior products.
Click to expand... 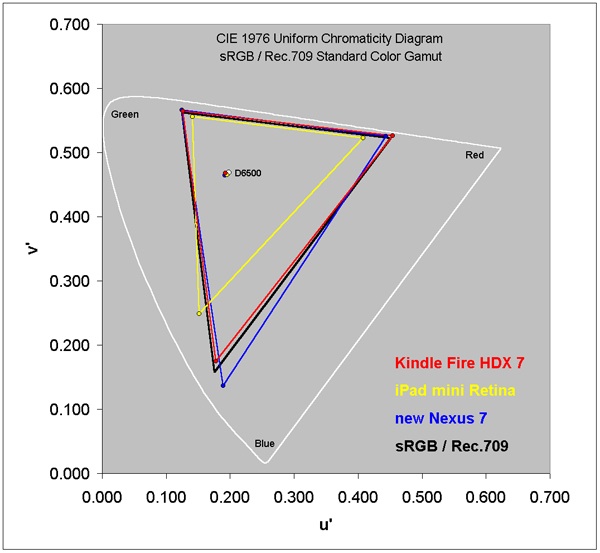 Color gamut of Retina iPad mini, Kindle Fire HDX 7, and Nexus 7 (Source: DisplayMate)​
Soneira notes that the strong performance by Google/ASUS with the LTPS display in the Nexus 7 and Amazon with its Quantum Dots technology in the Kindle Fire HDX 7 "should be a wakeup call" for Apple, as the company is clearly no longer leading the industry in display quality.

One complicating factor in comparing the 7.9-inch 4:3 Retina iPad mini to the 7-inch 16:10 tablets from Google and Amazon is the fact that the 35% larger display area for the iPad mini would result in substantially higher costs if Apple were to shift to a different display technology such as LTPS. Still, to consumers comparing display quality of various tablets, the iPad mini appears to be a clear notch below its competitors.

Well at least the iPad Mini is priced competitively.

Where is the standard iPad in this diagram?
S

Now for the rush of undecided MacRumorians that will go and trade for a Nexus 7...
M

I agree the display just seems dull not vibrant at all. Clarity is great but just seems very dull and not bright at All. Anyone else feel this way?

The U.P. of Michigan

Well my decision is made. Hello iPad Air...
V

Noticed this in Anandtech's review as well. That too bad really, maybe IZGO isn't ready for prime time then.

so in lamens terms, the color is as vibrant as the ipad air, iphone 5 and macbook retinas?
M

Damn you people are so ANNOYING!!! Shut up already and stop your whining. The RiPad Mini is fine. People are way too picky!!!
Last edited by a moderator: Nov 19, 2013
T

Wasn't it suggested by another website a week ago that LTPS has even worse yields than IGZO at large sizes, which is why Apple can't use it on their iPads as they have to build them on a scale much larger than Google or Amazon.

FFArchitect said:
Where is the standard iPad in this diagram?
Click to expand... 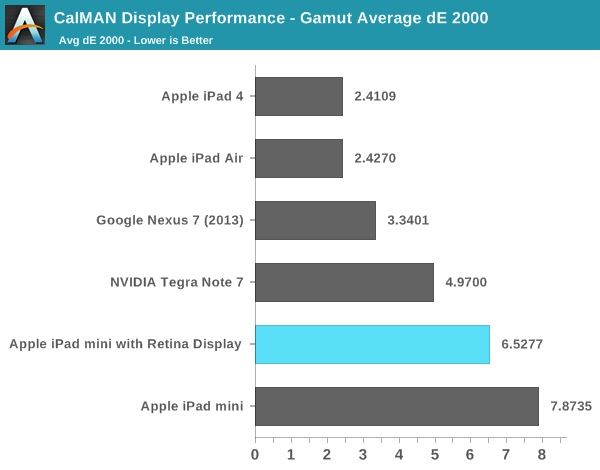 At least now I know I'm going to get an iPad air, when it actually comes to South Africa that is !

Was really looking foward to a retina mini though

Here's hoping my fandroid friends don't see this article, else I'm gonna have a bad time at campus tomorrow #

* The Nexus 7 display is too narrow.
* Gamut issues on the iPad Mini.
* iPad Air doesn't have speakers that fill the room with rich bass.
* Nexus 5 camera is average
* iPhone 5S only has a 4 inch screen

See, there are always flaws in everything....
S

because this really affected iPad mini sales how?

I've been using a Kindle Fire HD for a week and hated it. The screen isn't everything.

well the more reason the air is better then the mini.
M

I'm glad to see Apple getting called out on this. They have big boy pants and in the long run will only make for a better product in the future.
A

This was the deal breaker for me in the decision between Mini Retina and Air. I took a look at the new mini in the Apple store and it was awesome but the screen totally lacked color. Images just looked boring. Keeping my Air!

What's frustrating, after having waited so long for the retina Mini, is that the device is ALMOST there. It's just a damn shame the screen doesn't live up to expectations.

I think I will be keeping my retina mini, just for portability reasons, but I can't say that I'm entirely satisfied with the purchase.
B

FFArchitect said:
Where is the standard iPad in this diagram?
Click to expand...

If you go to DisplayMate's site (link is in the graphic credits) then look at the flagship comparisons, the Air is very good against both the standard profile and it's competition.

I can handle the gamut, it's the white on one side, yellow tint on the other that's annoying.
Last edited: Nov 18, 2013

One can hope all the threads discussing this (non-issue for most people) will stop clogging the iPad forum and focus here and be done with it once and for all.
B

ahlsn said:
This was the deal breaker for me in the decision between Mini Retina and Air. I took a look at the new mini in the Apple store and it was awesome but the screen totally lacked color. Images just looked boring. Keeping my Air!
Click to expand...

It isn't a deal breaker, but helps justify the Air for me. That and the Target Black Friday deal paired with my $200 iPad 1 trade in credit.
A