Retired Muppets Will Move to Atlanta

Retired Muppets Will Move to Atlanta
By BRENDA GOODMAN,

ATLANTA (July 24)  Times fun when youre having flies, Kermit the Frog once said. And how time has flown: Kermit, or more precisely one of the many puppets that have played Kermit, will be retired to Atlanta on Wednesday, part of a major gift being made by the Jim Henson Foundation.

The flippered phenom, who began life as a scrap of fabric cut from a green coat discarded by Jim Hensons mother, will be presented to the Center for Puppetry Arts here. He is a symbol of a large gift of Mr. Hensons work that will be donated to the center and exhibited in a planned Jim Henson Wing, said Cheryl Henson, president of the Jim Henson Foundation.

Ms. Henson, Jim Hensons second-oldest daughter, and Jane Henson, her mother and Mr. Hensons first performing partner, expected to be in Atlanta on Wednesday to announce the gift: 500 to 700 puppets, including some of the first Muppets built; props; scenic elements; posters; sketches; and drawings that Mr. Henson created for shows like The Muppet Show, Sesame Street, Fraggle Rock and Sam and Friends (where the Muppets first appeared). Cheryl Henson has also pledged $1 million of her own money to the center.

It is unclear how much the gift is worth. The Smithsonian Institution had its small collection appraised but would not make the figure public.

At the moment, they have not been given the entire collection, Cheryl Henson said in an interview on Friday. We are assuming we are going to give them the best of our collection, she added, explaining that the archive owned by the family consists of a couple thousand items, but that many have become too fragile to exhibit. Some of our collection has gotten old; even in the last seven years it has deteriorated. Its not that were holding back a large portion of the collection.

Built from foam and fabric, each puppet character had multiple copies because of performance wear and tear. The gift covered puppets that could no longer be used to perform; in fact, the Kermit in question was a photo Kermit  used for photographs but with no opening for a puppeteers hand.

The Wood of Spots, NJ

I just love the thread title.

Silly Muppets- get back to work!

I must say- I am a HUGE Jim Henson fan. Kermit is easily my favorite character of all time, followed closely by the Doozers from Fraggle Rock. I absolutely love anything Muppet related.
S

I must say- I am a HUGE Jim Henson fan.
Click to expand...

Hear, hear, including absolutely loving Fraggle Rock! For myself, though, I have always been a Boober fan.

As for Jim Henson, I am thrilled that a museum wing dedicated to him is openning. I love the work he did such as the afore mentioned Fraggle Rock, Labryinth, and the Dark Crystal. I respect the person and his work tremendously, and am very pleased he is being honored this way. As a note, for a glimps into Jim Henson and how he has touched others, just see the book "It's Not Easy being Green: And Other Things to Consider."

I am also very happy to hear that the museum will be in Atlanta as I have family there and will make a point to try and see it the next time I am in town.

South Mississippi y'all, near the water!

Henson was born in Leland, MS, a very small town in the Mississippi Delta.

There's an Old Muppet's Home? Why didn't anybody ever tell us?

I have to admit, if Kermie really moved there and was put on exhibit, I'd be sorely tempted to see him. I <3 Kermie. I even have a picture of him on my site.

Who could resist such a sweetheart? *swoon* 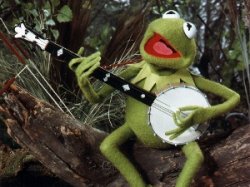 Who said that every wish
Would be heard and answered...
Click to expand...

devilot said:
I have to admit, if Kermie really moved there and was put on exhibit, I'd be sorely tempted to see him. I <3 Kermie. I even have a picture of him on my site.
Click to expand...

There's an Old Muppet's Home? Why didn't anybody ever tell us?
Click to expand...

South Mississippi y'all, near the water!

Why are there so many songs about rainbows?

(figured everyone knew why it wasn't easy being green, points if you get this reference)

solvs said:
Why are there so many songs about rainbows?

(figured everyone knew why it wasn't easy being green, points if you get this reference)
Click to expand...

I've been to the center for puppetry arts in atlanta many times (my mom got us a season pass one summer when i was little).

It's actually a very cool place. They have many shows (and not just kids shows, either) and a growing puppet museum collection. I have to think that getting Kermit is quite a coup. This will probably drastically increase their funding and scope.

Out of any and all kids shows i watched in the 80's/90's I fondly remember (at the moment) The Muppet Show, Fraggle Rock and Duck Tails.

Those shows are what I grew up on as a kid.

But seriously, why are there so many songs about rainbows?

joepunk said:
I <3 the 3-D Muppet show at Disney World.
Click to expand...

OMG, so it was real! I vaguely remember that show from when I went to Disney World when I was about 4. LOL, and now I can remember that my grandfather broke his 3d glasses before the show started. Weird how that one comment made me remember something that hasn't entered my mind for years.