Review: Anker's PowerWave Go 3-in-1 Stand Charges Your Apple Devices at Home and on the Go

Back at CES, Anker announced the PowerWave Go 3-in-1 Stand, a docking station for iPhone, Apple Watch, and AirPods that also includes a removable power bank to charge your devices on the go, and after a few months to finalize the product, it's launching today. 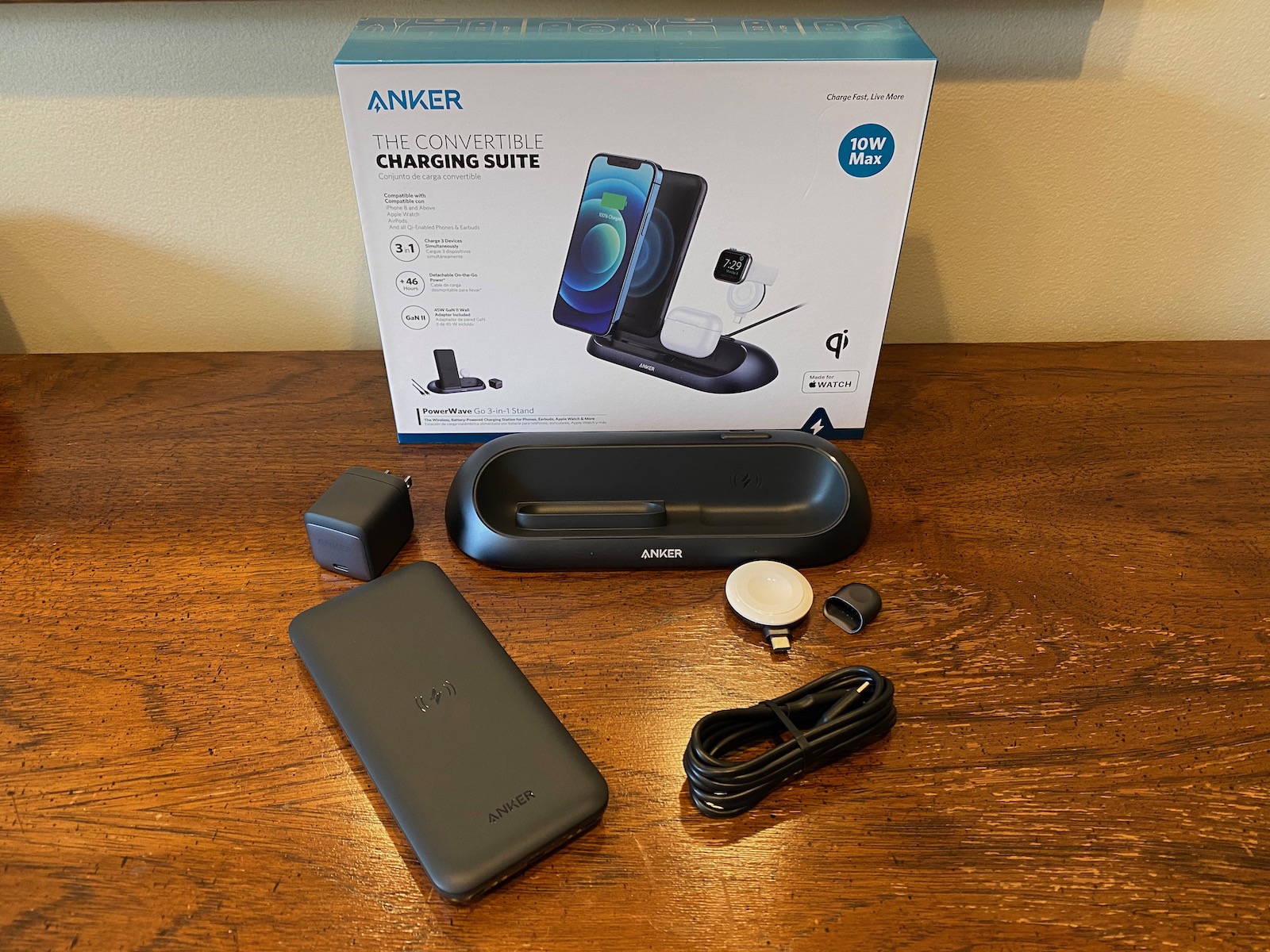 I've had a few days to try out the PowerWave Go, and I can say that it's a clever gadget that comes in handy for those steeped in the Apple ecosystem. I've been using Belkin's MagSafe 3-in-1 charger at my bedside for the past few months, so swapping it out for the PowerWave Go made for a convenient comparison.

The PowerWave Go is made largely of gray plastic, but it looks nice and feels solid. The front of the main body is dominated by a depression which houses a slot for the rechargeable power bank that doubles as the phone charger portion of the device, as well as a spot for wirelessly charging an AirPods or AirPods Pro case. 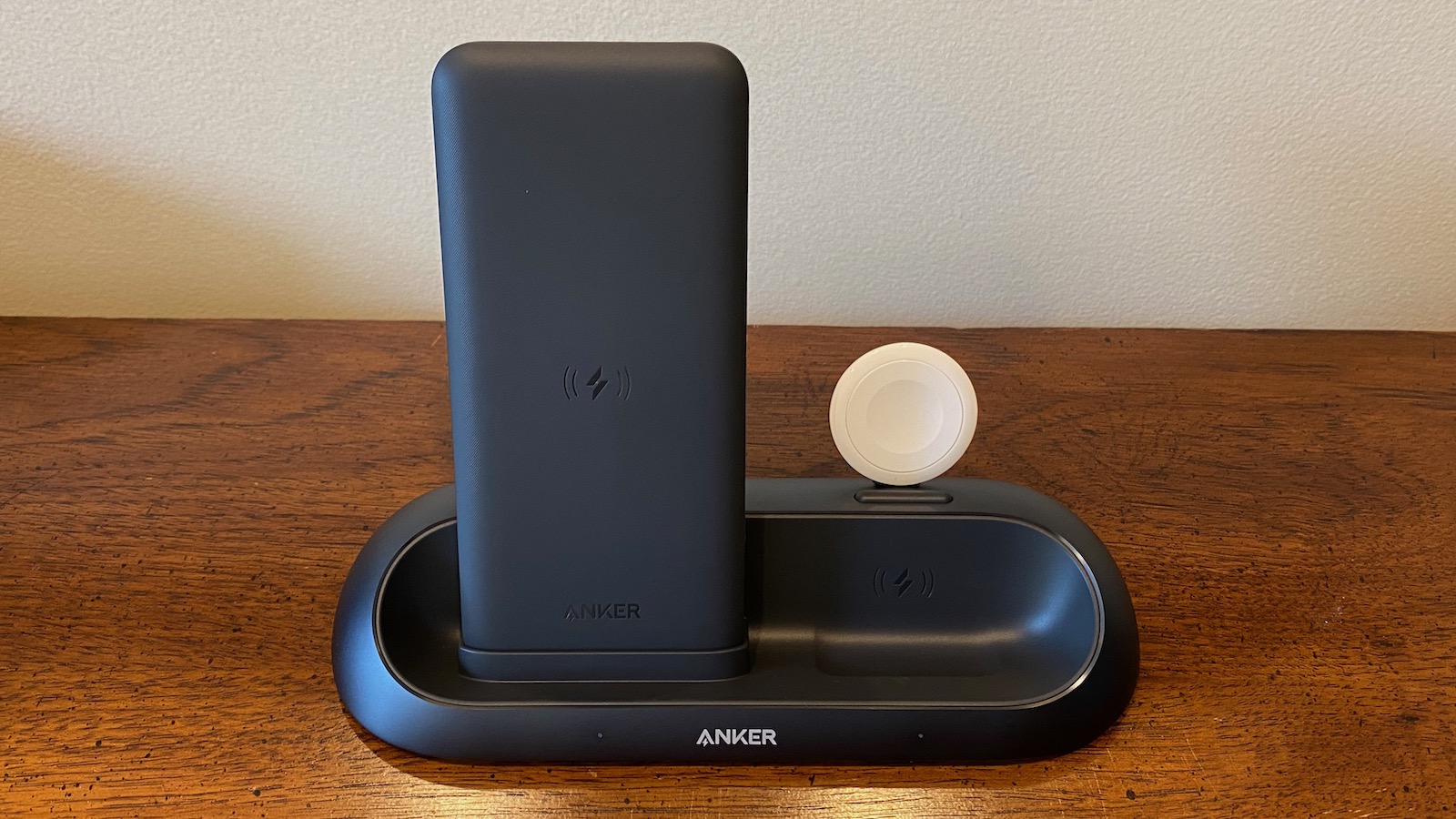 On top of the body behind the AirPods charging spot is a USB-C port where the separate Apple Watch charging module connects. Fully assembled, it's a fairly attractive-looking charger that offers a versatile setup.

One limitation worth noting is that Anker says the unit is not compatible with the iPhone 12 mini, as the smaller size of the device prevents the charging coils from lining up properly in stand mode. The phone will work fine in power bank mode.

The whole docking station is powered through a single five-foot USB-C to USB-C cable and the 45-watt version of Anker's new ultra-compact Nano II GaN chargers, with both the charger and cable included in the box.

In this desktop mode, the PowerWave Go supplies up to 10 watts of charging power for a phone, although an iPhone will be limited to 7.5 watts due to Apple's limitations on non-MagSafe charging solutions. It will also supply 5 watts each to the AirPods charging spot and the USB-C port for the Apple Watch charger. 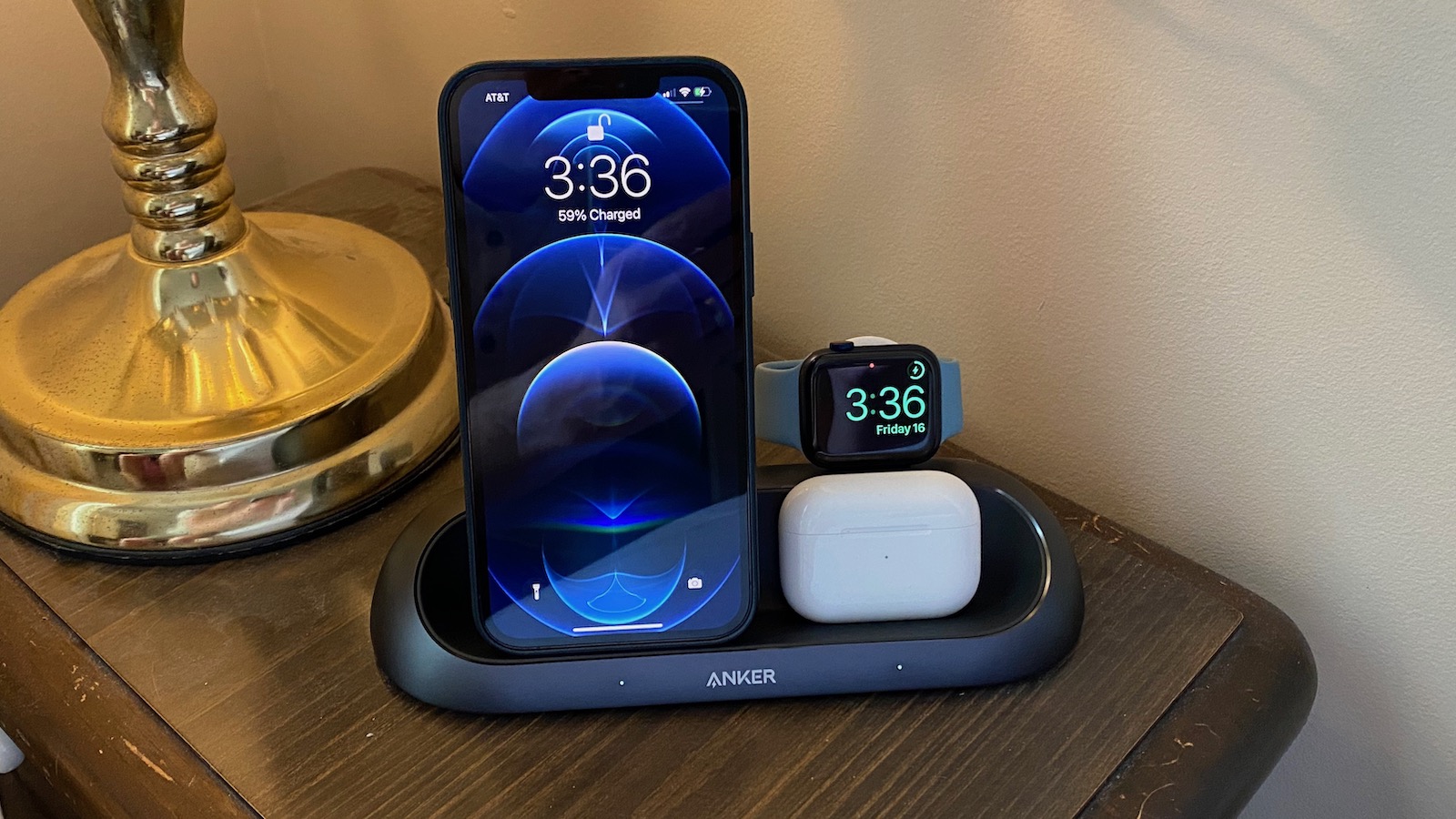 When you're ready to go on the road, you can just grab the removable power bank from the base as it's simply held in place magnetically and receives its power through pogo pin contacts. On its own, the power bank can then supply up to 10 watts of wireless charging power and up to 20 watts from a USB-C port. 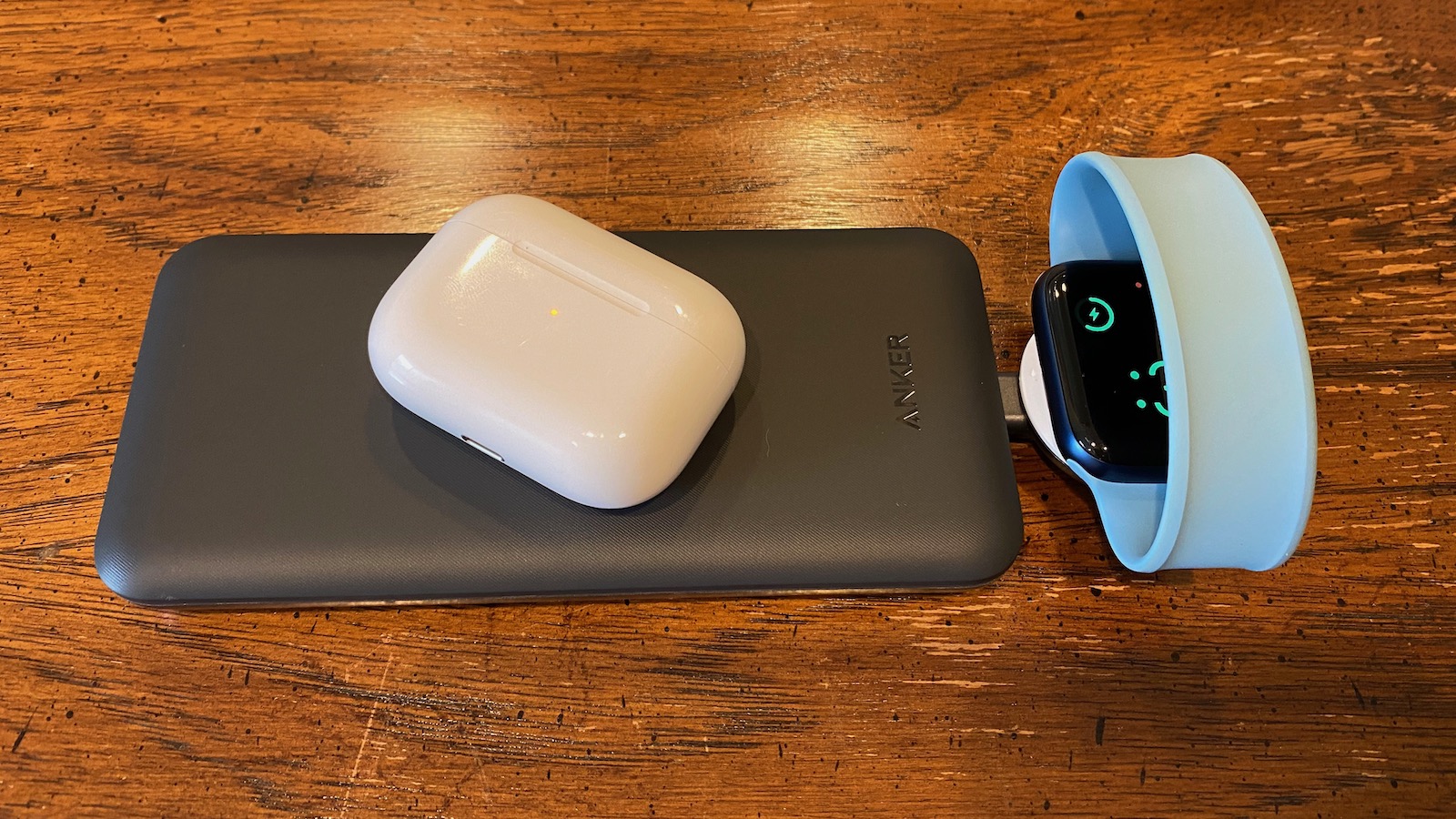 If you also need to charge your Apple Watch on the go, all you need to do is pop the Apple Watch charging module of the main body of the PowerWave Go and attach it to the USB-C port on the power bank and you're all set. Anker includes a plastic cover to protect the USB-C connector on the Apple Watch module while it's loose, but I can see myself losing that in no time. USB-C ports are pretty hardy though, so I'm not too concerned about losing the cover.

Since the Apple Watch charging module uses USB-C, you can also use it separately without the power bank or docking station, such as by connecting it directly to a USB-C power adapter or to a USB-C port on a computer.

The power bank holds up 10,000 mAh of charge at 3.7 volts for a total of 37 Wh of energy. That's enough to fully charge most iPhone models around two to four times. The power bank can also be charged directly over USB-C, so you don't need to have access to the PowerWave Go base to recharge it. And thanks to passthrough charging, you can also wirelessly charge your phone while recharging the power bank. 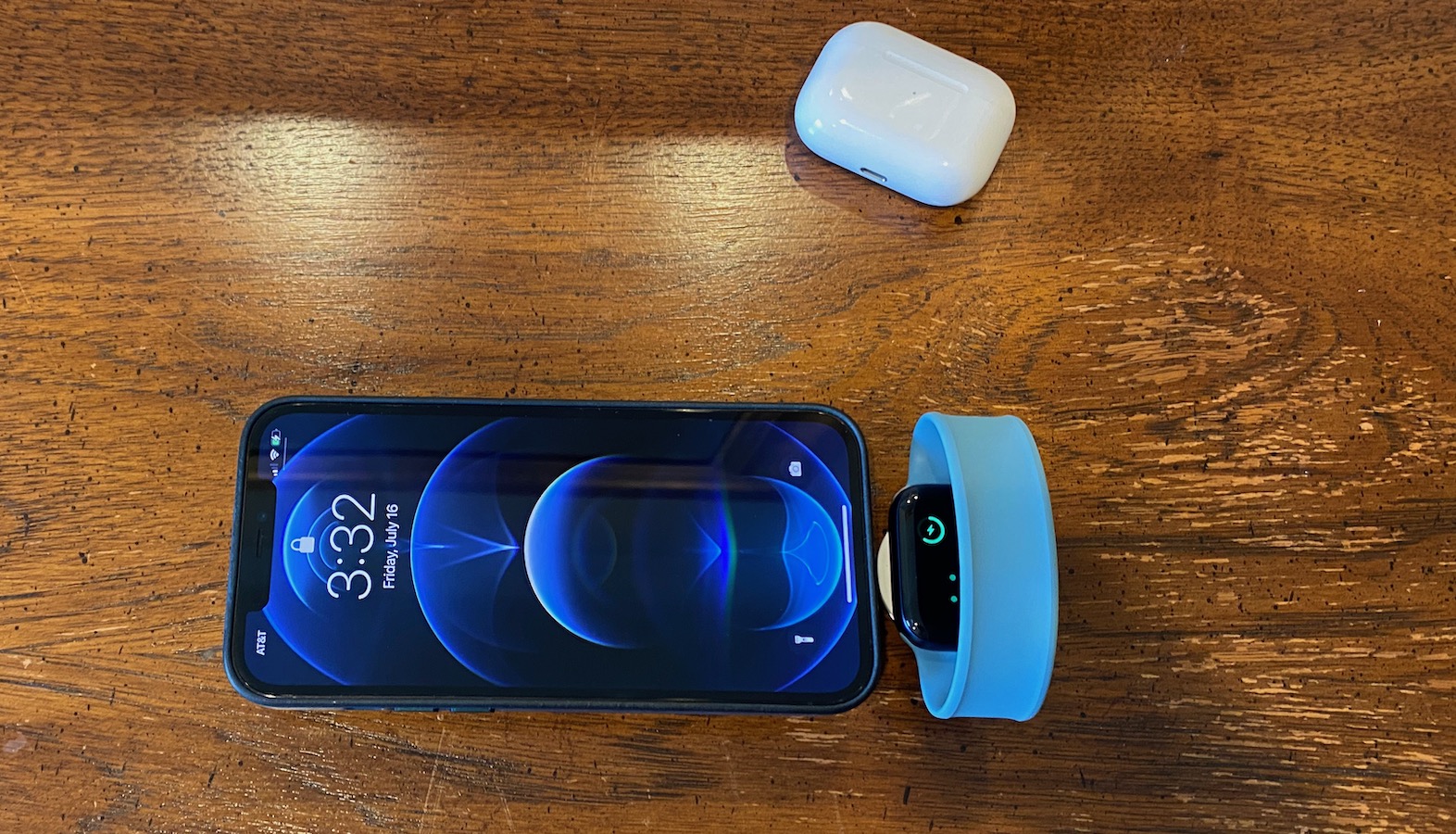 In comparing the PowerWave Go to Belkin's 3-in-1 dock, there are some aspects I prefer about each of them. As a first point of comparison, the Belkin stand supports MagSafe while Anker the stand does not. I find MagSafe handy for making it easy to set my iPhone to charge with a very clean look, but the PowerWave Go's stand is essentially just as easy as far as getting my phone into charging position.

The PowerWave Go won't charge as quickly as the MagSafe Belkin charger, but I'm generally using it overnight so speed isn't really a factor and can actually be a detriment if too much heat is generated. The MagSafe aspect of the Belkin also means that support is limited to the iPhone 12 lineup at the moment, while the PowerWave Go can support a broader range of Qi-compatible devices.

The power bank on the PowerWave Go has a fairly bright blue light on its side that comes on whenever it's charging a device in either stand mode or portable mode. So for those who are sensitive to light at night, that's something to be aware of.

I definitely prefer the AirPods charging spot on the PowerWave Go over the Belkin one, at least for the AirPods Pro I use daily. It's super easy to just drop them into their spot on the PowerWave Go, while the Belkin has more of a slight depression on a flat surface and it takes longer than I'd like for the charging light to come on and confirm that I have the case positioned correctly. The Belkin setup does allow for larger devices like another phone to be charged in the AirPods spot, but it's at slower speeds and not something I've ever needed to use. 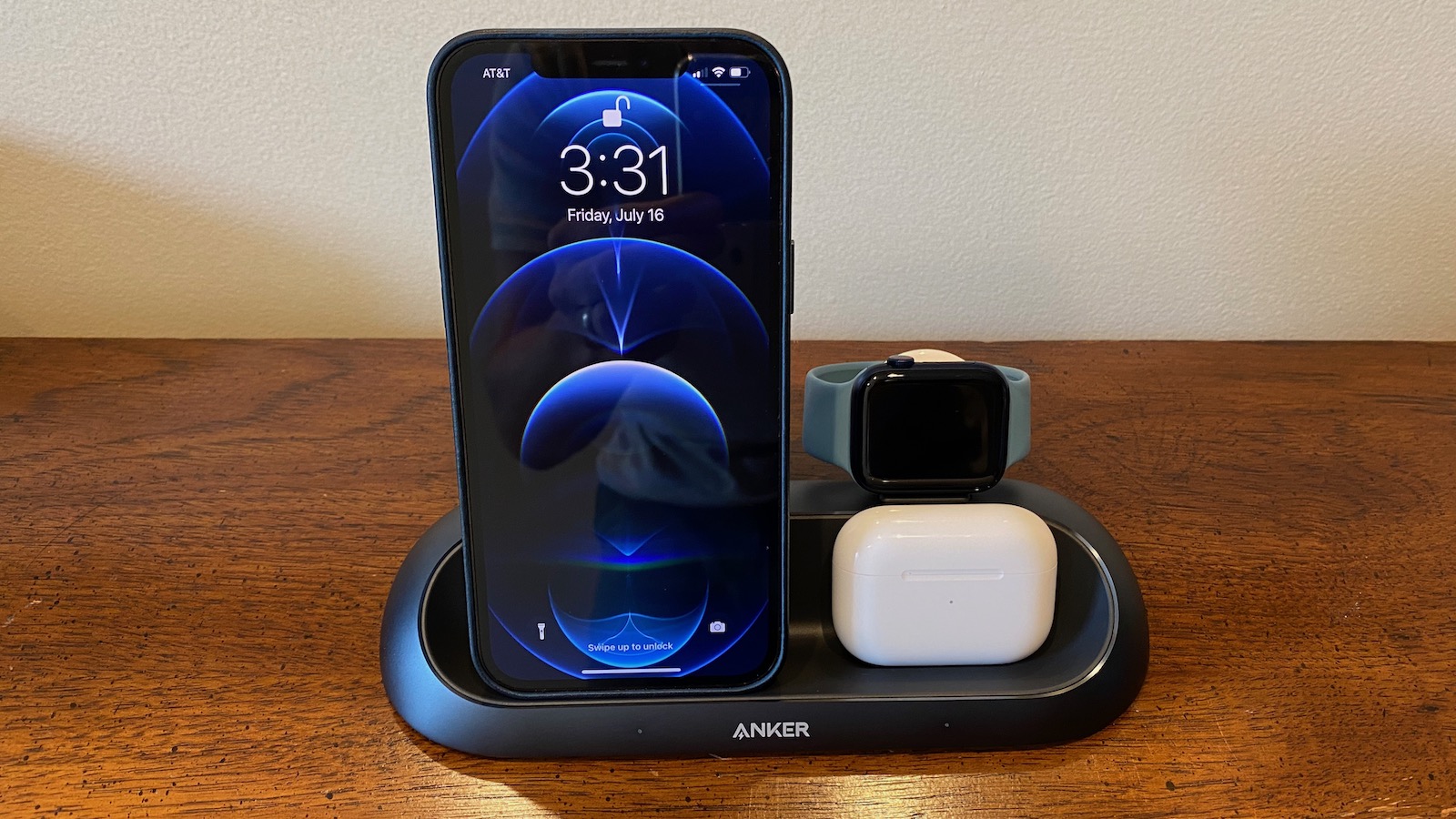 The portable conversion aspect of the PowerWave Go is of course something the Belkin 3-in-1 can't match, and I like that I can just pick up the power bank and Apple Watch charger and be ready to go. I've been using Apple's MagSafe Duo Charger for the little bit of traveling I've done recently, but the PowerWave Go portable setup offers more flexibility given that it doesn't need to be plugged in.

All of this convenience doesn't come cheaply, with the PowerWave Go priced at $179.99, which is $40 more than the Belkin dock when purchased through Apple. But with a quality build supporting a number of Apple devices, a removable high-capacity power bank with wireless charging, and Anker's excellent 45W wall charger also included, there's a lot of value in this package.

Note: Anker provided MacRumors with a PowerWave Go for the purpose of this review. No other compensation was received. MacRumors is an affiliate partner with Amazon. When you click a link and make a purchase, we may receive a small payment, which helps us keep the site running.

Article Link: Review: Anker's PowerWave Go 3-in-1 Stand Charges Your Apple Devices at Home and on the Go

Said this when this was announced, but without MagSafe, that detachable power bank is a backwards step when it could have been an indispensable travel gadget.

179 dollar landfill fodder the nanasecond any one of the three devices changes form factor. I really dont know why or where people get the money to waste on such things
Reactions: Knight^mare, rettro, robotica and 2 others

While I would have vastly preferred this to have been MagSafe... this is a pretty trick setup.
A

Let's hope they don't find Apple's stash. Depending on the configuration, that's about 10% of what and IPhone, Apple Watch and Airpods would cost.

I own both the 3-in-1 and 2-in-1 Belkin one. I have to say, based on what's pictured here, this Anker one looks cheap, overpriced, and like something that belongs wrapped around a Hewlett Packard product lol. My only complaints with the Belkin are the AirPods landing area being a little smaller than it should be, and there's no way to disable the charging light for use bedside.
S

I know that beauty is in the eye of the beholder but, although the Anker has slightly more utility, the Belkin is a much, much attractive device.

I only wish that the 'neck' of the Belkin could fold downwards. It would make for quite a neat travel-charger if it did.
F

@Neepman just because you don’t personally need it doesn’t mean it’s worthless. Why do people feel the need to comment on products that obviously weren’t designed for them?

As someone that travels a lot with my phone, watch, and AirPods… this looks really interesting. Right now I carry a power strip with me that has all the chargers plugged in plus a separate power bank. It’s unwieldy. This would be miles better.

As for the price - $180 for all those chargers and a power bank that are all portable and work together is just fine.

If you’re not the target market - don’t comment.
Reactions: ogremoustro, rettro, SigEp265 and 1 other person

I'm just looking for a nice IPhone 11 and Apple Watch charging station. No buds to worry about.