UPDATE: So Steven from Lucky Labs has responded about my review. He explained that 1% of his back cover skins have a flash problem. He had to make the choice between making the cutout bigger to alleviate that 1% problem rate or keep the clean look of precision cutouts. I did explain to him that someone here brought up that it might be a white carbon specific problem which makes sense since white absorbs light which is further evidenced when I use my flashlight app. The skin around the camera lights up like a Christmas tree. So he offered a replacement for my current cover. I declined because this would be the second time he replaced something for me. My first replacement was a genuine defect. With that replacement, he included a TekSure wrap in the color I originally thought I would get. He did not have to add the wrap because it was simply a misunderstanding on my part. This is what excellent customer service is like. Needless to say, I ordered more product from the guy.

I haven't tried many other brands, but it's going to be very hard for me to turn my back on Lucky Labs considering the quality and level of customer service. By the way, Steven said that customers are more than welcome to request bigger flash cutouts. Just leave that in the comment and he'll custom cut the flash portion for you. I would do this with the white carbon especially if you have the white iPhone. Still looks very good since it's white on white.

I have now had the Lucky Labs White Carbon Teksure back skin and wrap on for the past few weeks. I will start out by saying that I was sent a defective back cover skin. There was a partial cutout for a home button cover. I contacted Lucky Labs and they responded the same day. I was quickly shipped out another set free of charge. There was also a misunderstanding in the initial transaction which I take half fault for. That was also resolved without issue.

Ease of Install: Fairly Hard - The back cover skin is not so bad. Took me a few tries each time (from installing defective and replacement skins) to line up the camera and flash holes correctly. The trick is to let it just naturally fall on the iPhone so you can unpeal easily if need be. Have a piece of tape handy so you can lift the skin off if necessary. The hardest part of the install was definitely the wrap. It was quite tricky to get everything lined up properly. The wrap for my volume button side was a tad too long. This was easily remedied with scissors.

Make sure you line up the buttons/cutouts first before you start to lay the wrap down. Even if you don't apply pressure, after you lay it down, the wrap will stretch if you aren't very careful about pulling back up. This is especially true for the cutout portions of the wrap. I am a perfectionist when it comes to skins and protectors, so this one took me a good 20 minutes to get right.

Case compatibility: I have not had any problems with the various bumper cases I have had on my phone. The Griffin Reveal Frame I am using now did cause one of the corners to unpeal and warp, but that was my fault. I wasn't being super careful so as long as you do the opposite, you won't have this problem.

Fitment: Very Good. I need to point out that while the wrap portion of the skin has excellent fit, the back cover skin does not. While the portions are perfect, the flash cutout causes washed out photos. I really believe back cover skins should have one large cutout for the camera and flash. Similar to the one you see from Lucky's own TruSkin. I believe the back covers that come with Element cases have the same type of single cutout. I find these to work the best.

Quality: 9/10 - Very good quality. The Lucky Labs' skin is a bit thicker than others I have received with various cases. Unlike my other skins, this one makes a very satisfying noise when you scratch it. Has a durable feel to it and I don't have any doubt that it will protect my iPhone 4S from evil keys or my 15 month old playing drums on it with his toys. Well, as long as he doesn't go all Hulk Smash on it. Even then, the skin I'm sure will survive... it's the phone I'm worried about at that point haha.

Overall Impression: Very satisfied with both the product and customer service. He even took my suggestion to leave the cutouts in the order. I told him that I wanted the cutout piece for the sim card. This is just a personal preference of mine as I would like to cover the sim card slot, but still have it visible if you know what I mean.

The flash issue is a minor problem for me because I rarely find myself in the need of flash. I would like to note that the flash washes out less the closer the subject of your picture is to you. It's also washes out less in dim areas rather than completely dark ones. However, even in the best circumstances, there is still a loss of color saturation due to the wash out. I will be emailing Lucky Labs with the link to this review. Maybe they'll resolve the flash issue afterward. One can hope right?

I am definitely going to buy from http://theluckylabs.com/ again especially with the buy 1 get 1 deal they have going until the end of Cyber Monday. By the way, the white carbon stays clean. I haven't seen any noticeable color degradation. I do wipe it regularly though.

Picture time! The two attached pictures show a flash photo without and with the back cover respectively in a dark basement. 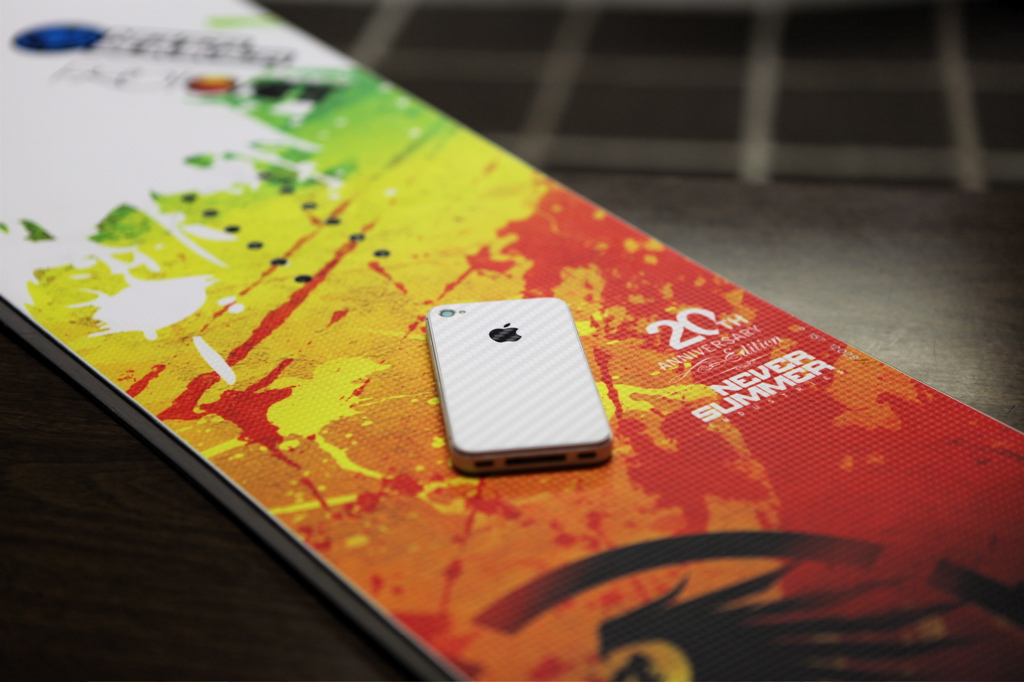 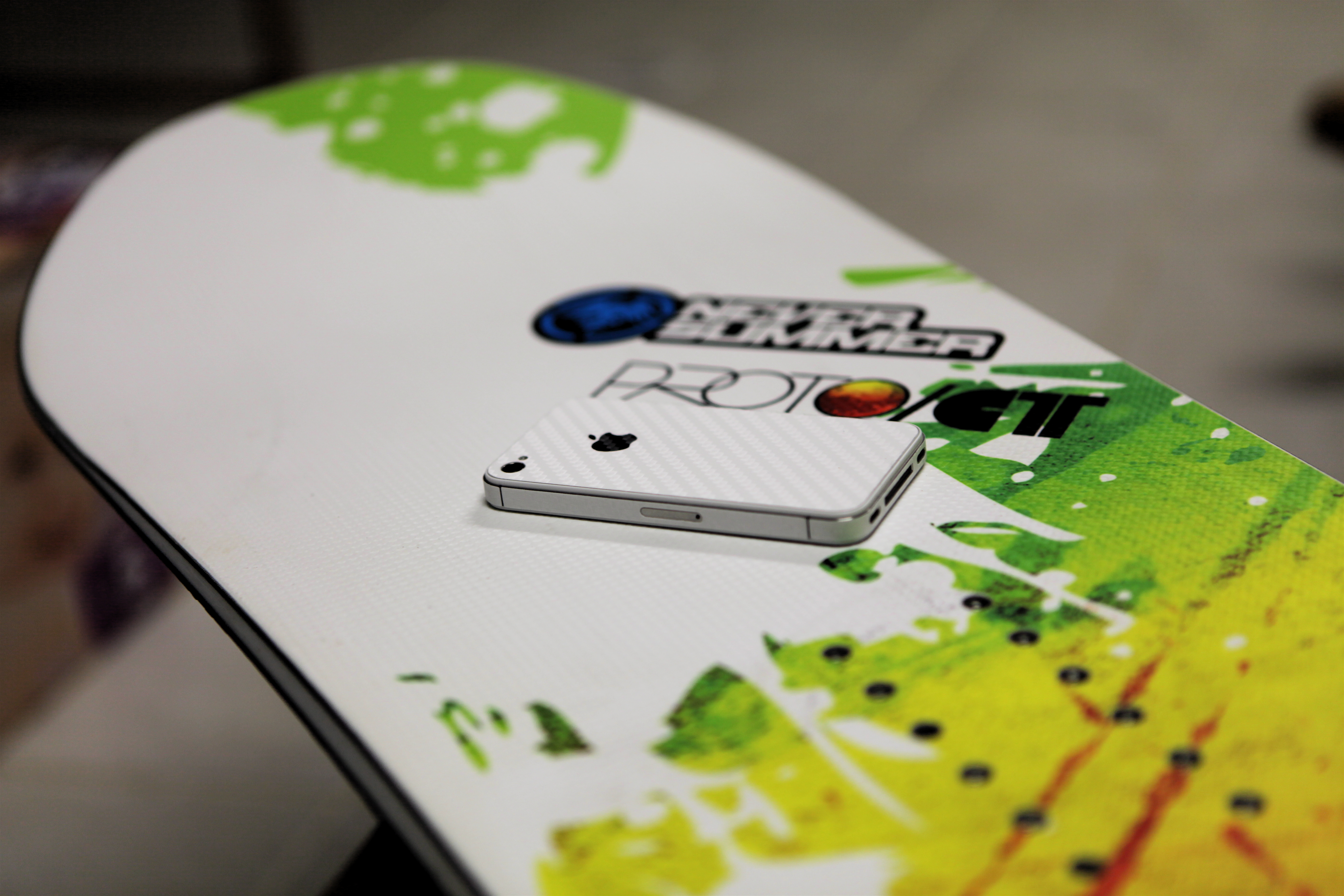 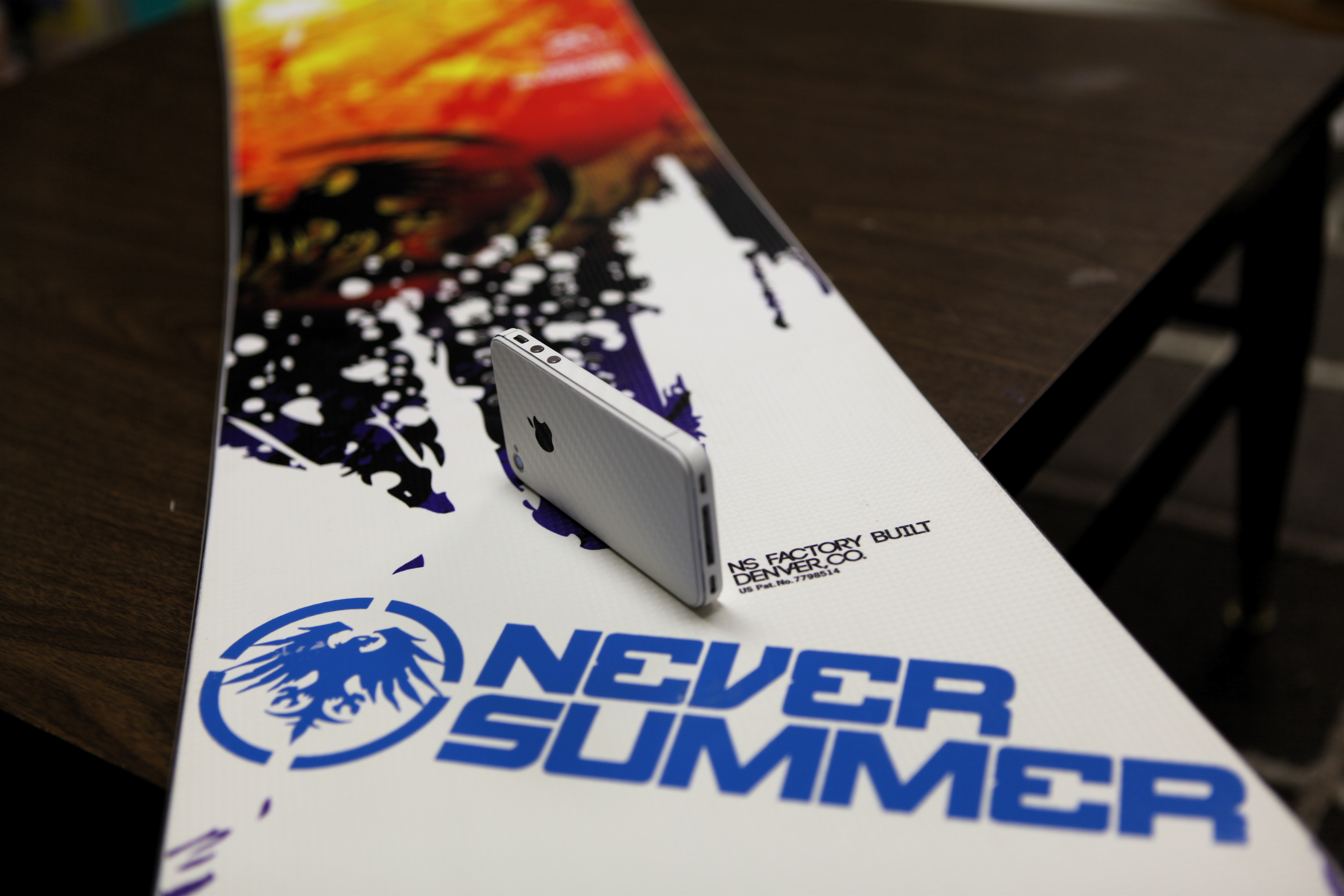 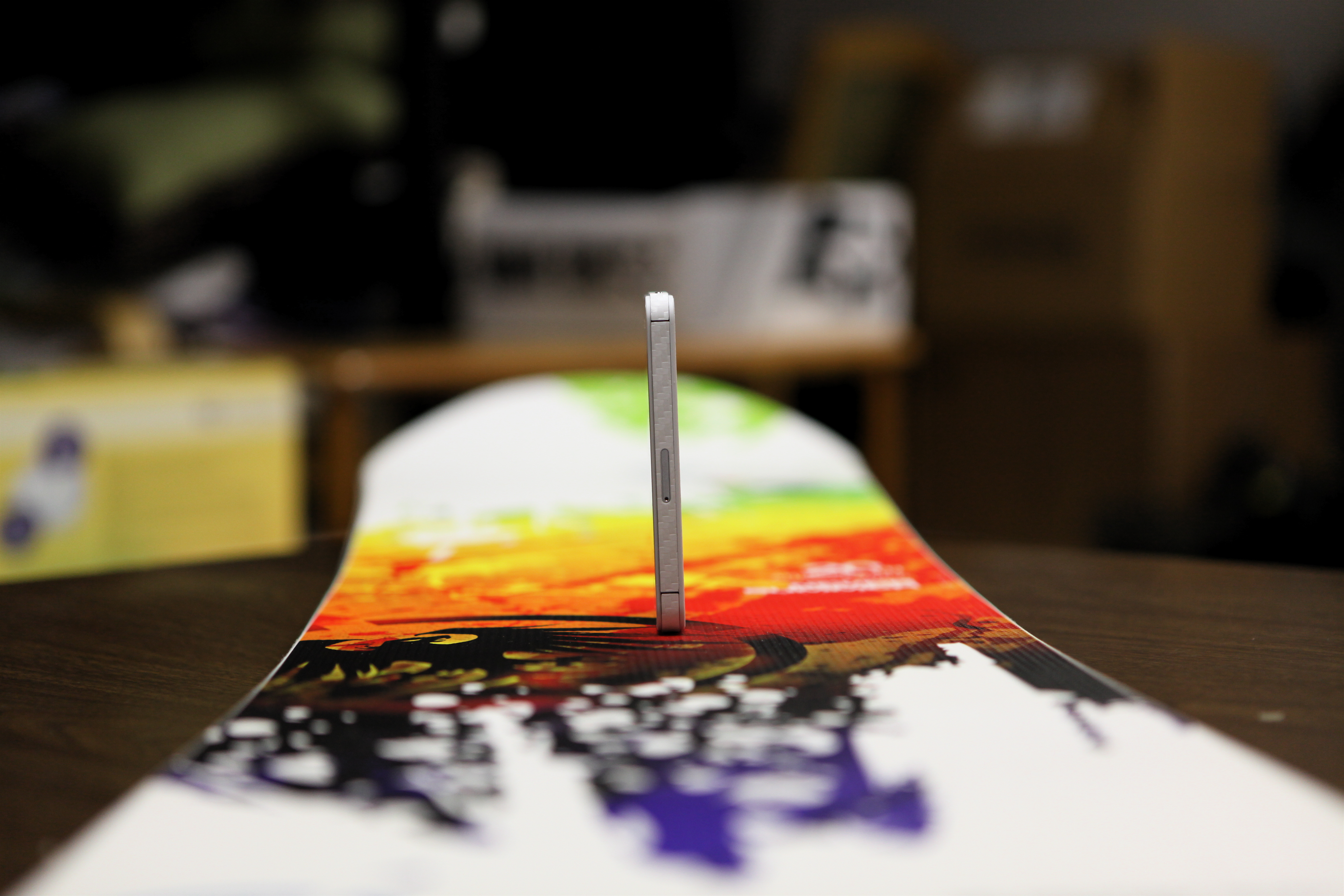 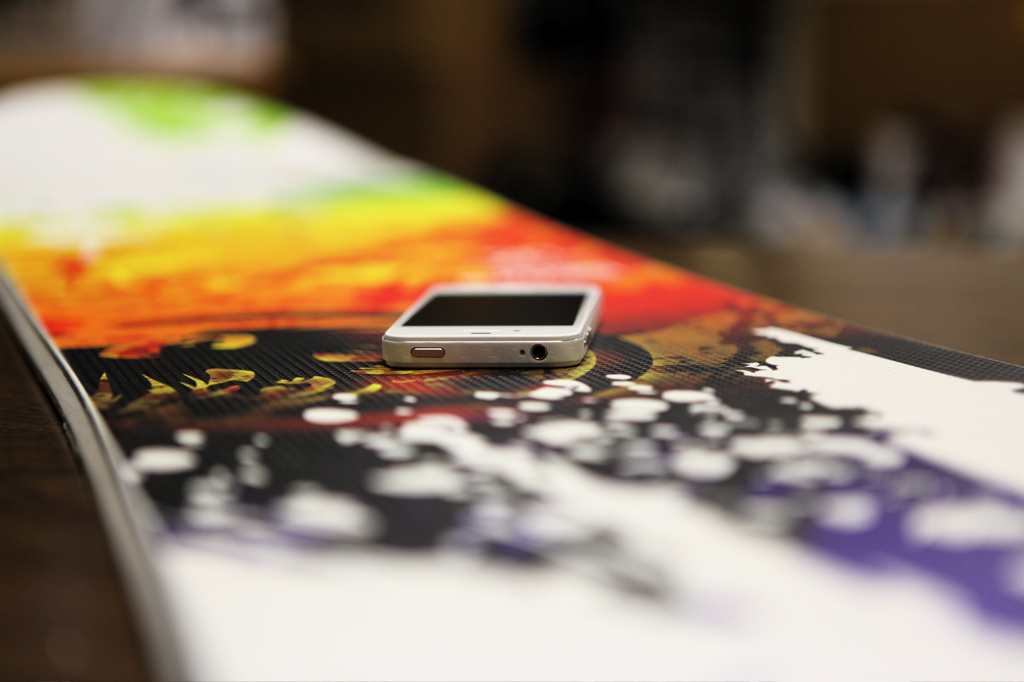 I also had the Teksure wrap and skin on my 4S. I recently removed the wrap but left on the skin. Mine was the black carbon fiber. I found that the skin fit perfectly and caused me no flash issues. The wrap however was a bit off. One of the pieces was a bit too long and covered one of the black pieces between the metal antenna bands. I ordered 2 wraps and both had the same issue.

Despite this I was overall happy with the wrap but removed it recently in order to fit an Incipio NGP case on my phone. With the wrap on the case didn't fit right.
T

The wraps are relatively easy to install you just need a steady hand.

The wraps are nice, but they kept coming off after a while so I just took it off. The glue started to melt too.

might be the white carbon back that causes washouts because my black one never did
Click to expand...

That's a good point. White does absorb light and when I look at my flash while it's on (flashlight app), I notice that the entire area around the cutout lights up. That could very well be the reason. Nice catch!


TM WAZZA said:
The wraps are relatively easy to install you just need a steady hand.
Click to expand...

Yes, it is relatively easy. But I pointed out that I'm a perfectionist. Took me about 20 minutes to make sure it's perfect. Meaning if I flick my finger from under the wrap on the side of the metal band, it's flush. My first few applications had one side sticking slightly out so if I ran my finger across from under, I was able to pull the skin up.


docprego said:
I also had the Teksure wrap and skin on my 4S. I recently removed the wrap but left on the skin. Mine was the black carbon fiber. I found that the skin fit perfectly and caused me no flash issues. The wrap however was a bit off. One of the pieces was a bit too long and covered one of the black pieces between the metal antenna bands. I ordered 2 wraps and both had the same issue.

Despite this I was overall happy with the wrap but removed it recently in order to fit an Incipio NGP case on my phone. With the wrap on the case didn't fit right.
Click to expand...

Yea, I had the long piece issue as well. I just fixed it by cutting it with scissors. Can't even tell I cut it.

For anyone thinking of getting these, I recommend using a soap/water mixture to apply them. It's much like the way Zagg or BSE skins are installed. I've noticed some people having issues with applying them so hopefully this will help some of you.

I haven't used this method on the back skins but on the sides it works perfectly. You don't want to use a lot but the soap will help the skin "slide" so you can get it placed perfectly. It dries fairly quick as well. I've done about 10 of the Spectra side wraps with this method and they hold up exactly the same as applying them dry.

I added an update to my review about the customer service. Read through the update because there's a tip for future purchases.

You can buy this on EBay for much less.

asleep said:
You can buy this on EBay for much less.

Just checked. They aren't much cheaper for the ones that are cheap. $4.00. Customer Service for Lucky Labs I'm sure is leagues better.

No wraps either. No option to get a different color apple logo, etc...

Any idea if coloring in the inside of the flash cut-out with a black Sharpie would help with the flash issues? This seems to work for some cases, like the Magpuls.

judgecrandall said:
Any idea if coloring in the inside of the flash cut-out with a black Sharpie would help with the flash issues? This seems to work for some cases, like the Magpuls.
Click to expand...

Hmm... Didn't think of that one. I'd be careful though... might show through. It might also cause your iPhone to get discolored around the flash. Even when markers dry, they can still rub off on other surfaces.

Not sure if it would be easy to clean though since the iPhone backing is glass.

This would be worse for white iPhones. Personally, I would just ask for a single cutout for the camera and flash like the way they do it on their Truskin. Just a little larger for the flash side though. I have another white carbon skin with a cutout like this and it doesn't look bad at all on a white iPhone. I understand it would look funky if it's white carbon on a black iPhone with a large cutout like that.