Today I'll be reviewing the Otterbox Defender series case for the iPhone 4s. Apologies in advance for the poor quality photos: I can't find the card adaptor for my camera, so I'll be using Photo Booth to take pictures. 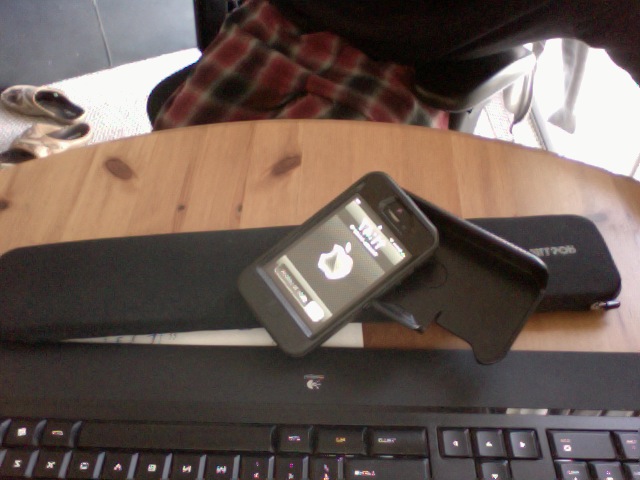 There's no denying it: The Otterbox Defender is a padded brick. This is not a sleek, stylish case to show off the modern lines of your new device. On the other hand, the Defender does a very good job of what it was designed to do: Turn your mostly glass device into a pocket-sized Sherman Tank.

The Otterbox Defender covers your audio out: 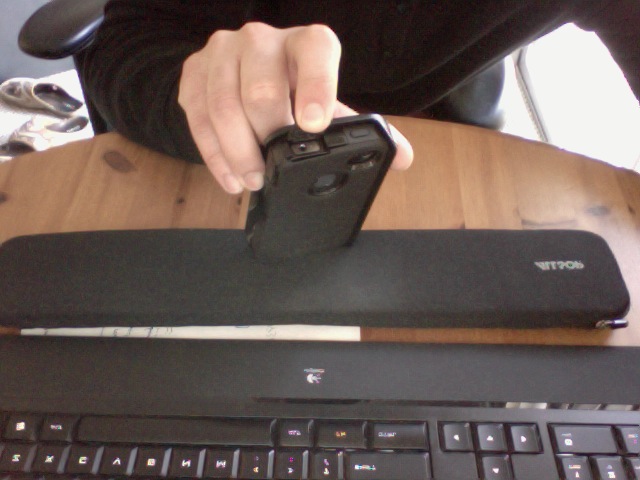 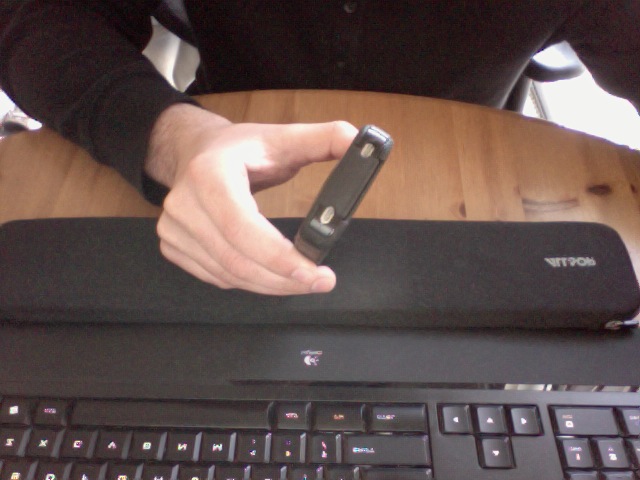 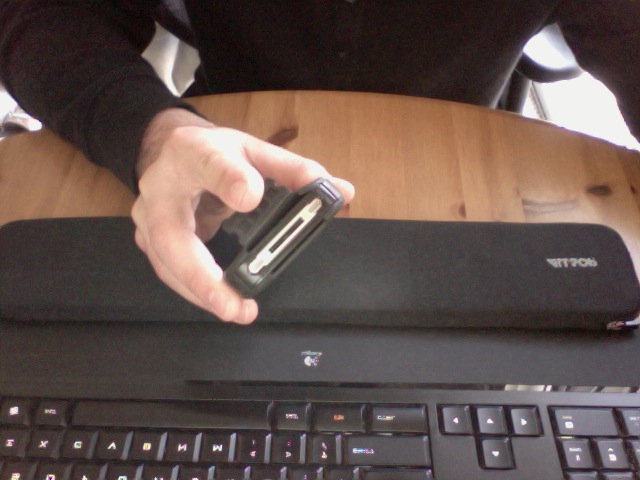 ...And mute switch with a silicone flap that snaps closed. As shown, it's a bit of a tight fit, but the headphone port is still accessible with the case attached to the belt clip. I would rather have seen the silicone flap hinge on the opposite side to minimize stress on the headphone plug, but it seems to be fine as is, and unlike the case on my iPod Touch, it actually allows you to plug in headphones with a larger jack than the Apple provided ones. You'd think this would be a no-brainer, but cases like the PowerMat actually require you to use a flimsy adaptor cord that will eventually fail. 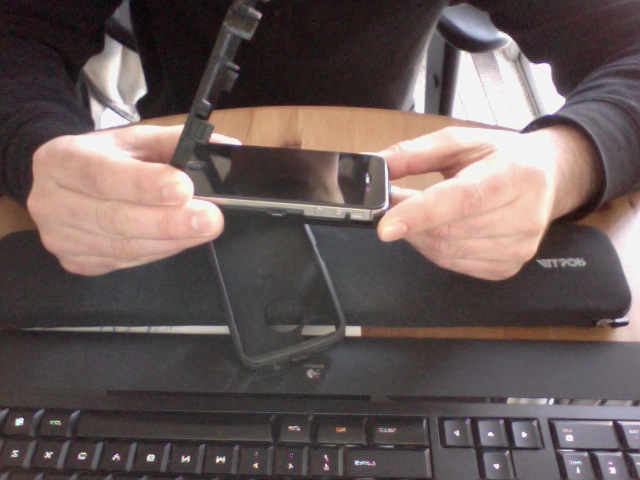 The case comes in 3 pieces: a top level with attached screen protector, a bottom panel with a window for the Apple logo, and a silicone sleeve that slides over the entire assembly. 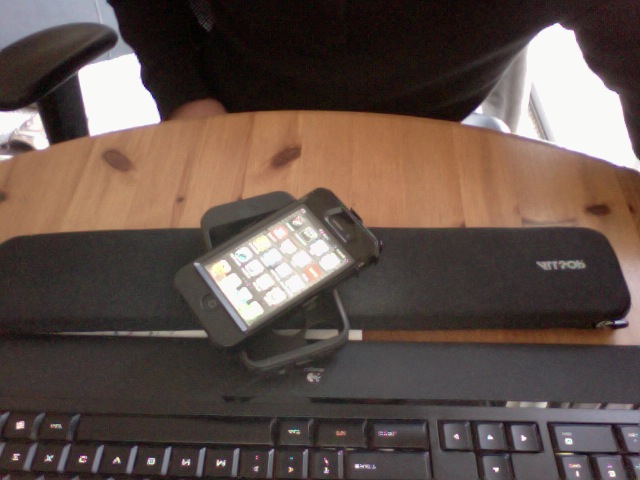 The hard plastic interior case snaps together with a slide-clip like a TV remote, and 3 snap-on clips: 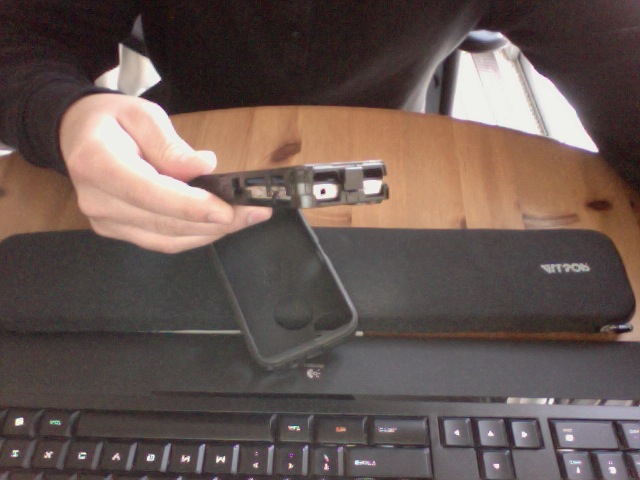 And the entire assembly slides into the silicone sleeve as shown: 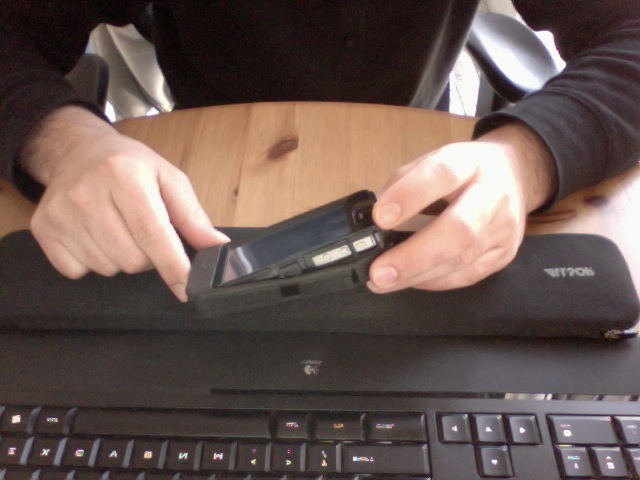 Overall, the case is solid, and while it adds significant bulk to the device, it doesn't sacrifice function. The touchscreen still works perfectly even through the fairly thick, and fingerprint resistant attached screen protector. You have the option of removing the screen protector and leaving the screen nude, or covering it with a plastic film of your choice. 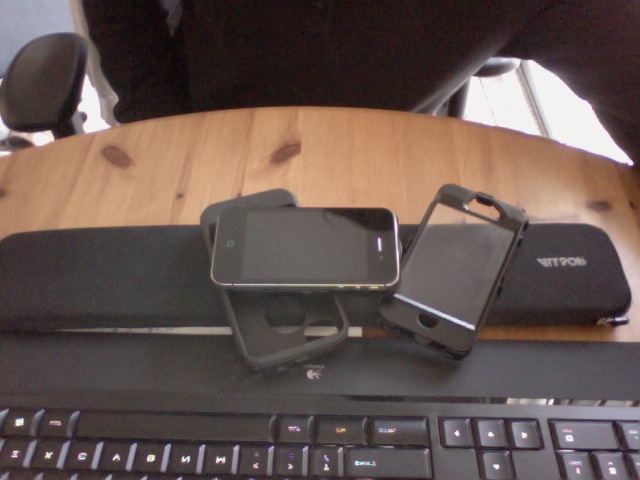 I left the integrated screen protector on, since it doesn't seem to affect touchscreen accuracy, and keeps spills on the outside of the case. I've already spilled coffee on my phone, and although some of it seeped part way under the plastic rim of the case, no liquid made it to the phone. I've already scratched the screen protector a couple of times at work, and was pleasantly surprised to find them invisible with the screen on. 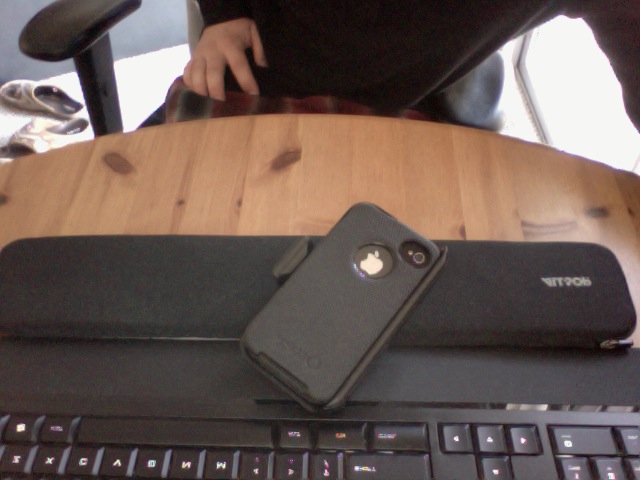 Another pleasant surprise: the multi-position belt clip functions well as an adjustable kickstand, something I haven't seen mentioned in any other review I've read. 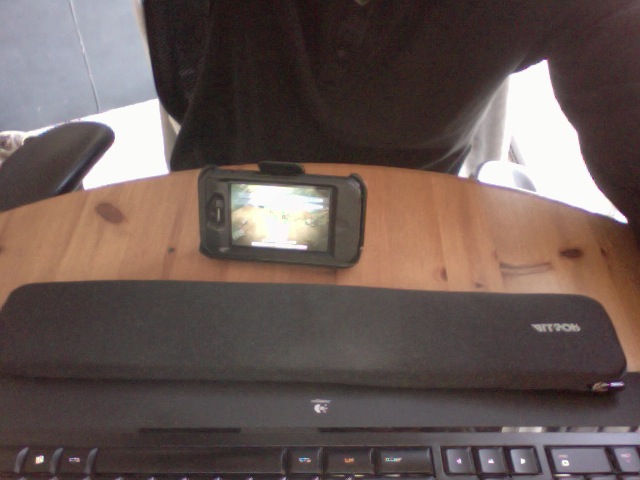 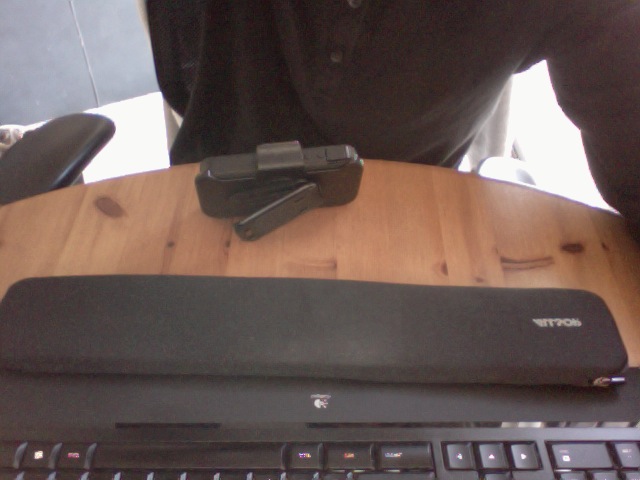 The molded belt case (I believe it's ABS) attaches to the exposed areas of the interior hard case with a solid click. The only part of your phone not covered are the camera and flash, but they're recessed far enough to prevent damage. I would have preferred the option of plastic layer over the camera as well, but I'm sure my photos wouldn't.

Overall, the Otterbox Defender is a well made, rough-use case. It's not the prettiest case on the market, unless you're a fan of military/industrial design, like I am. The Defender case is not be for every iPhone user, but I find it suits my purposes well.

FYI. there has been A LOT of reviews about this product.

FYI. it's called the Otterbox Not Pelican. Two different companies.

FYI. There is seach button.
R

Thank you for your constructive and worthwhile input.

However, this is the Otterbox Defender case (No idea why I keep calling it Pelican, probably because of the style of case it is) for the iPhone 4s, which came out in November 2011.

This is an updated and revised design, and doesn't seem to have any of the screen or audio jack access issues I've seen mentioned about the iPhone 4 Otterbox case. And personally, I would have gone after me about the pyjamas instead of the photo review.
Last edited: Jan 19, 2012

Don't see the point of all the FYI's... Great review btw!

espiritujo said:
Don't see the point of all the FYI's... Great review btw!
Click to expand...

Thanks for taking your time and doing the review.

Might get this case for when I'm out on the bike.
Does seem like a tank armor.
A

Thanks for the informative review. I loved the Otterbox Defender on my 3GS but on my 4 I have used 2 different Defender copies, one with the original 4 flash/camera/etc cut outs and one that was a copy of the newer "4S" Defender like u have with uncovered larger cut outs for the camera/flash and ear speaker/proximity sensor and with both I have had an issue with the light from the flash bouncing back into the camera off the sides of the cut out in the case, causing the pics to look smokey/overdeveloped/washed out, making it impossible to use my flash without taking my phone out of the case. Is this an issue with the actual Otterbox 4S Defender or is the flash actually usable with this case? I've been torn between getting this one and the Speck 4S Candyshell. as my best friend uses the Candyshell on his 4S his pics using his flash look the same with of without the case on.
Last edited: Jan 21, 2012

A mate of mine has the defender and has to date dropped the phone 4 times all resulting in no damage to the phone yet if it were naked both the front and back would have been smashed!!
E

There is never something wrong with adding a review. Don't listen to the first poster. Thanks!

I used to be all about the really protective cases, but they're just too thick for my liking.
L

My dad has the older-style Defender case (with the older camera/flash cutout). Now it may just be his ignorance to it but it seems like every time I see his phone, all of the flaps are open (headphones, vibe switch, connector port). I know he doesn't ever plug headphones into it so I don't know why these are always open. It just seems like a mess!

But it's a mess that he needs. We're talking about the guy who dropped his phone within the first month of having it and shattered the screen. Leaned over to pick up some brush while mowing the lawn and noticed that he was about a foot away from running over his iPhone with the riding mower (had dropped it previously). His built-in protector is all kinds of scratched up...

I personally use a commuter-series. Like the defender, it doesn't "show off" the lines of the phone but I don't really care. My phone is a wonderful device and I love it but I don't look at it and think words like "sleek" or "sexy". That's just me. Don't get me wrong, a naked iPhone is neat cause of its thin form-factor so maybe one day I'll better appreciate the design and looks of the phone...

Anyway, thanks again for the review and ignore the hater up above... it's reviews like this that add things to forums and make them good resources.

I can see hating on this case if i was 21 and trendy and had an office job... but I'm 41 and a construction worker and a klutz. :roll eyes:

One thing that is rarely mentioned is that it isn't totally dust-proof. I generally take the case off and wipe everything down nightly. It isn't a deal breaker for me.

I def don't like the vanity cutout on the back for the apple logo. Dumb dumb dumb.

I've had the phone and case since November. I highly recommend it.
R

I also work construction, so it's great to hear how well the case is working out for you.

The vanity cutout is a little dumb on a heavy-duty case, but I kind of like it. If they did that, I'm not sure why Otter didn't use the same plastic film over the camera opening, or put a silicone flap over it like the Survivor case has.

Far as the dust, I've noticed that myself. Dust seems to work it's way under the screen protector and vanity window pretty easily. Thankfully, it seems like that's all it is, and I won't have to worry about metal shavings or grit making it's way into the case.
You must log in or register to reply here.
Share:
Facebook Twitter Reddit Email Link
Top Bottom