(A cross-post of my original article published on my blog, after removing links to my previous article to avoid self-promotion.)

I'm seriously into shooting both stills and videos (no wonder I'm a regular poster on several imaging forums) and have dedicated several articles to, among other things, storing / reviewing EXIF, including geolocation, information in stills shot.

So far, it was impossible to display the EXIF information of images in the Camera Roll. All you had a big map under the Places tab, where you needed to find your current shot, which in some cases (you don't exactly remember where it's been taken AND you have several photos on your handset) was impossible. The ability to review EXIF info? To quickly look up the location of a given still shot? All painfully missing from the built-in, stock Photos app. All you could do was using third-party and, in most cases, non-free apps like Apple's iPhoto (with its, in many cases, useless, OpenStreetMap-sourced map) or (the, for this reason, pretty good) Photo Manager Pro. This, however, requires you to use third-party apps, sometimes with the additional hurdles of having to import the image to the app (which may take a lot of time) before being able to check out its EXIF / location.

For the Cydia community (that is, only for JB'n devices!), a brand new, free(!!) tweak, Photo Info, has just been released. A Cydia screenshot: 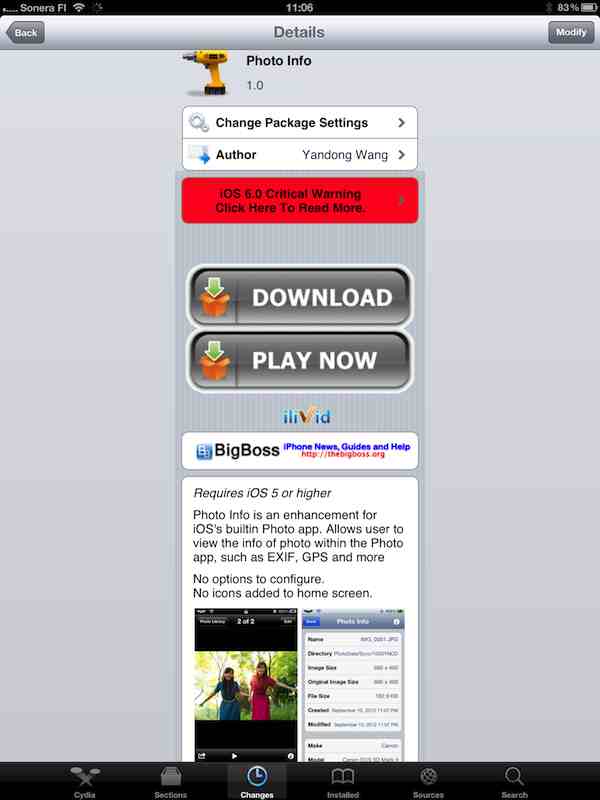 Note that this shot has been taken on the iPad, with which the app is (at least for now  version 1.0) is incompatible with. You will, for the time being, NOT want to install it on your iPad because you not only won't see the info icon (see below), but will also crash Photos in many occasions. Only install it on your iPhone / iPod touch! I'll let you know if and when it receives iPad compliance; make sure you subscribe to this thread so that you surely get notified.

After installing the tweak (and auto-respringing the device), when viewing images in Photos, you'll be presented an info icon in the lower right corner of the screen. In the next screenshot, I've annotated the icon: 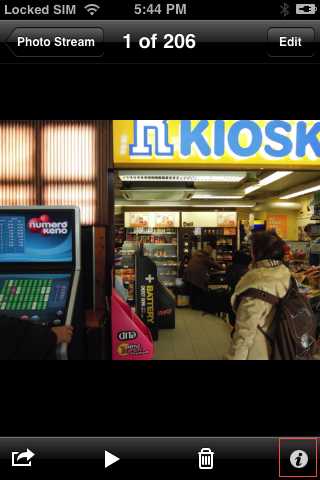 Just tap it to see the EXIF info. An example (all EXIF info in a series of screenshots): 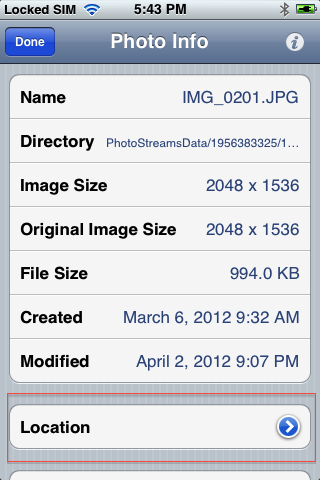 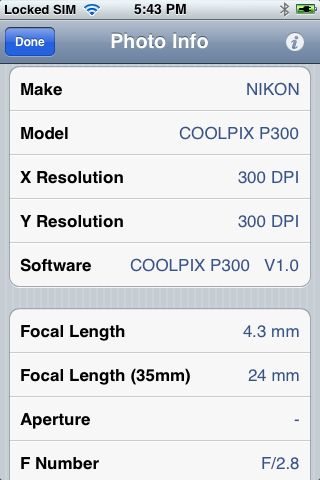 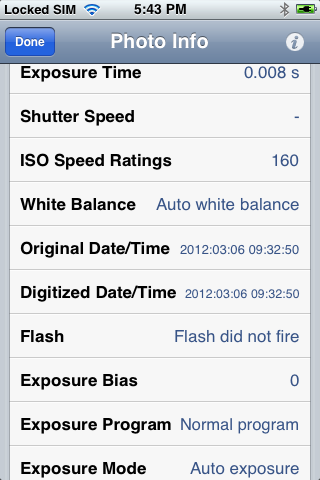 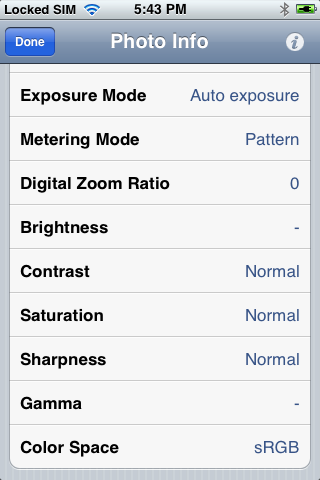 If you tap Location at the top of the list (annotated in the first screenshot in the series above), you'll be shown the exact location of the shot: 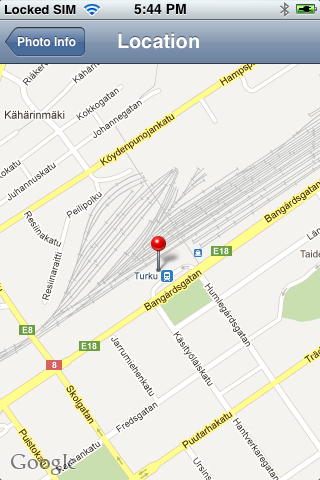 All in all, this tweak is a must for every serious shooter. Now, you can check everything right in the stock Photos - for example, right after taking a shot, via only some 2-3 taps (remember: you can immediately, with one tap, access Photos from the Camera app. You can't do the same with, say, iPhoto). No need to waste time on starting iPhoto or other apps to do the same any more.
Last edited: Sep 29, 2012

Altought the tweak looks nice your review has little to do with the hacks section, just like your other lengthy review of an app.
M

TriJetHero said:
Altought the tweak looks nice your review has little to do with the hacks section, just like your other lengthy review of an app.
Click to expand...

It's a new, previously, in this forum, non-discussed and great Cydia tweak. This is why I cross-posted my full article here instead of just starting a thread with "Hey, have you heard of the new "Photo Info"? It rocks!"
M

The brand new, 1.1 version fixes the iPad incompatibility and also adds other EXIF data. An example screenshot on the iPad 3: 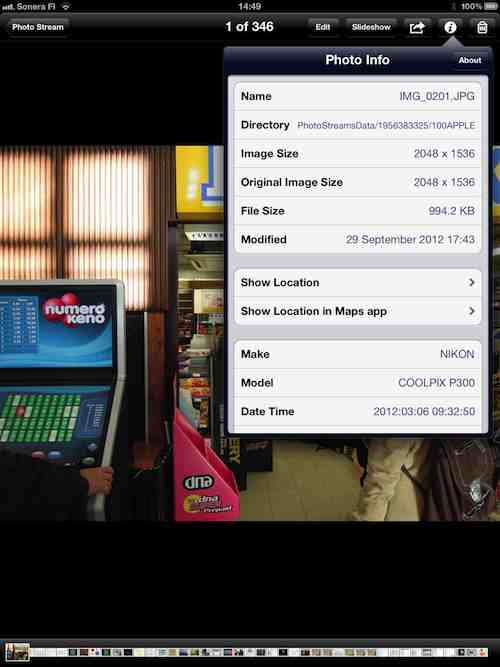 As you can see, as with the iPhone, you need to tap the new "Info" icon to get the info.

Menneisyys2 said:
The brand new, 1.1 version fixes the iPad incompatibility and also adds other EXIF data. An example screenshot on the iPad 3:

I couldn't get it to run on my iPad2, the photo app crashes when this is installed

I've heartily recommended the (jailbreak-only), free(!) Photo Info tweak for anyone using his or her iDevice as a camera: it makes it possible to quickly review the EXIF information, including the GPS data, of a shot you take, without having to transfer / import the shot to an EXIF/mapping-capable third-party application like Photo Manager Pro  something painfully missing from Apple's own stock Photos app.

Before the just-released version 1.2, it was only able to show the location of the shot using its (small) map. With the new release, this is no longer the case: you can make it using the built-in, stock Maps app with all its goodies (routing etc.). (Note that I haven't tested it under iOS 6, as it still doesn't have untethered jailbreak - and the tethered one doesn't work on any new, A5+ model.)

Just do the same as in the previous versions; that is, tap the info icon. There, a, compared to the initial version, new menu item will be presented (annotated by a red rectangle below), Show location in Maps App, which shows you the location in the stock Maps app, along with the coordinates in the upper right text input field: 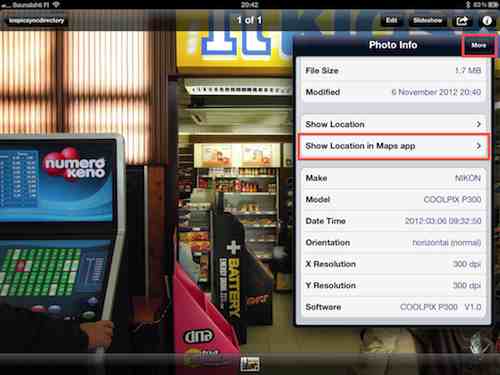 Tapping the new menu item takes you to the Maps app (here, I annotated the pin placed by the app): 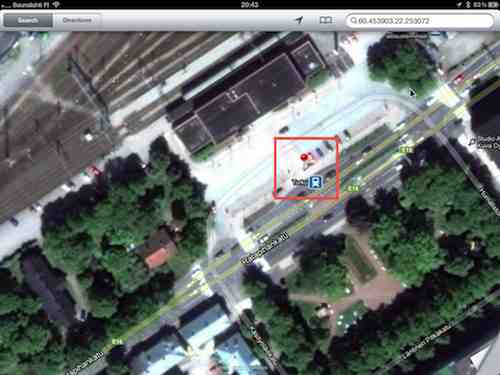 Speaking of the pin, as is also explained in the version 1.2 update description, you need to explicitly enable placing the pin on the map. To do this, just tap More in the dialog window of the tweak. I've also annotated this in the first screenshot above. In the new dialog, just enable the Search Location switch as is shown in the next screenshot (also annotated the switch): 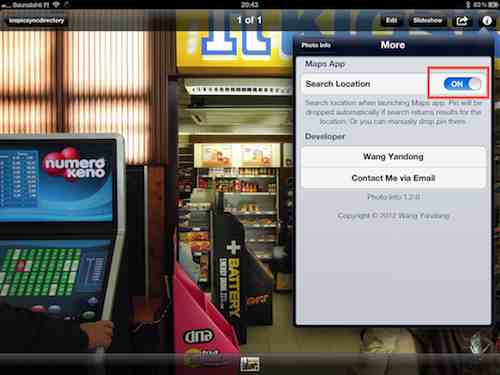 If you don't enable this switch, the tweak will show the environment but won't pinpoint the location. All you'll have is the fact that the original place of the shot will be in the exact center of the screen. 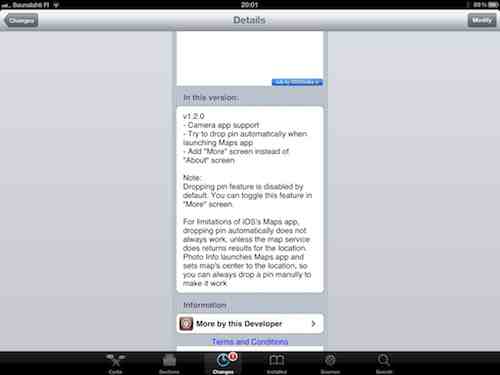 Note that the list mentions Camera app support. I don't really know what this means: it doesn't put new icons / buttons (unlike, say, CameraTweak  see THIS for my article here at MacRumors) in the stock Camera app to, say, check out the shooting parameters (ISO, GPS coordinates etc.) of the just-taken shot without even having to switch to the Photos app by touching its icon in the lower left corner. I'll update the article if I find it out.
M


HOWEVER!!! On my (spoofed) 7.1b3 iPad 3, it made Photos immediately crash upon selecting any image from any album after an initial click on "Info". That is, don't even think of installing it on a (spoofed) 7.1b2/b3 device!

Regrettably, the incompatibility with 7.1b2/3 isn't enforced in the Control file either (it lacks "Depends: firmware (<= 7.1)").

HOWEVER!!! On my (spoofed) 7.1b3 iPad 3, it made Photos immediately crash upon selecting any image from any album after an initial click on "Info". That is, don't even think of installing it on a (spoofed) 7.1b2/b3 device!

Regrettably, the incompatibility with 7.1b2/3 isn't enforced in the Control file either (it lacks "Depends: firmware (<= 7.1)").