I just got this 644L hooked up, I thought I would share a few things. This is the Rocketraid 644L, not to be confused with the "rocket." 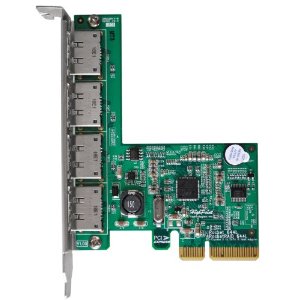 Total of 10 drives hooked up, 2 directly into the card - Samsung 840 EVO, and 8 hooked up through two port multipliers (Addonics 5X1 eSATA II). 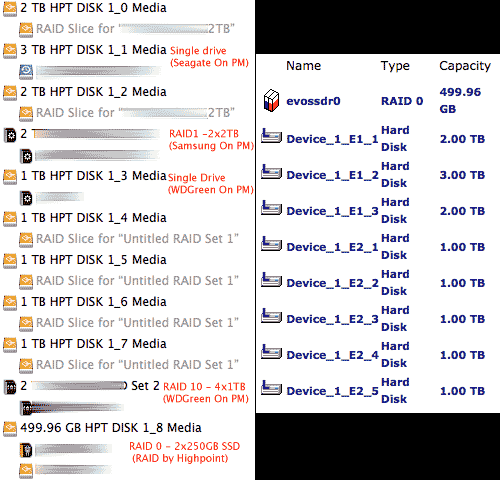 - When gathering information about this card, make sure you note that is the "RocketRAID 644L", not "rocket", not "644" not "642L." Nearly every combination of "rocket," "RAID", "L" or no "L" is an actual model name of another highpoint product which is not the same.
- Both this card and the very similar RocketRAID 642L use the Marvell 88SE9235 chipset.
- This IS BOOTABLE! However, you must update the firmware through the webGUI first and use this ROM (attached). It is not available on their website but HighPoint just emailed it to me.
- This and every other SATA/eSATA card for Mac I've found is PCIe 2.0 2x actually - capable of a maximum throughput of 1,000MBps. This is roughly what 2 top-of-the-line SATA SSD in RAID 0 should be capable of.
- It will work in any PCIe 1.0 or 2.0 or PCIe 3.0 slot from 4x to 16x.
- Supports port multipliers on all 4 ports, for up to 20 drives.
- Currently, according to highpoint, it does NOT support trim in OS X (see more info below)
- I simply cannot convince Windows 7 to boot off this controller on my Mac when there's a HFS+ partition already on there. I am not sure if bootcamp can boot off this card (see more info below).
- FAT32/NTFS partitions work perfectly through this card in bootcamp otherwise
- This card has issues with sleep
- This card seems to have NO issues with sleep after you update the ROM

These are all using the card on my hexcore 5,1 in Mavericks 10.9.1. I did no benchmarks with the built-in SATAII port.
-Single Drive
-Logical RAID-0 with Highpoint card
-Apple's Software RAID-0

These speeds are very much in line with other SATA III solutions on Mac, with a couple exceptions like the Tempo SSD Pro which are specifically designed to max out SATA III for SSDs. Compare this card to the FirmTek SeriTek/Q6G card seen here. Just a guess, but I think most SATA III solutions (and likely all eSATA cards) on Mac use similar Marvell controllers and will be about the same.

The RocketRAID 642L is bootable with a quick update which you can do through the webGUI. Let me say again: You do NOT need to boot into windows anymore to update the firmware.

THIS CARD IS BOOTABLE TOO!! However, like the 642L, you must flash it through the webGUI (included) using this ROM. It is not currently on their website but it was just emailed to me by HighPoint support.

The instructions say that you have to "clone" a working OS X partition in order to do this (which is probably faster than installing OS X anyway), however, now that Mavericks includes a working driver, this is no longer necessary (I verified this). Just flash the card, run Mavericks installer, and away you go.

This is a huge selling point for me. I've been using Highpoint's webGUI on my RocketRAID 2134 for years. It really is awesome. I do not know what others are doing without management software. You can have it email you with events like errors. It's clued me into failing hard drives and SMART failures I would not have seen otherwise. You can also use it to check temperatures of the drives, show SMART status, set up logical arrays, update the card firmware, unplug drives (note you do need to use the webGUI to properly disconnect drives).

This card will not do trim from OS X. Highpoint implied that they're working on it. Currently it is viewed as a "parallel SCSI" drive by OS X and so the AHCI drivers (which do the trimming) aren't working. Trim is highly recommended for SSD (if you're not using SSD, ignore this). There are SSD with built-in garbage collection including the Samsung 840 EVO.

This card works great in bootcamp, but I haven't been able to get it to boot into Windows yet, but that may be my own fault (read on!). Currently I'm booting off another (internal) hard drive with Windows on it. I have a partition hooked up through the 644L which runs programs, is manageable through the WebGUI, is recognized in OS X and Windows, etc.

My idea was to have a RAID-0 with my two drives (as above) and partition it into OS X and Windows, so I get the great speeds in both OS. The partitioning works and the NTFS partition certainly works in Windows, however I have tried a variety of methods and Windows doesn't seem to want to boot off it.

The Bootcamp utility straight up wouldn't cooperate (doesn't work with external drives) so I had to manually partition and then fix the partition using reFIt. This got Windows to install on the partition, but the installation would not boot. I have also tried creating a working installation of Win7 on an internal drive and then cloning it to the partition on the 644L but that threw the same error. Keep in mind the driver for the 644L is not included with Win7 so be prepared to install it (I had to throw the 32bit driver on a USB drive for the installer).

I have not tried having a dedicated Windows drive (read: no mac partitions, just a MBR-formatted drive with a single NTFS) and I may not even attempt. YMMV and that's all I'll say.

When I first got this card I was using the included firmware and I did have one episode of the driver locking up, while this did not lock up the machine, it did essentially make the drives hooked up to the card unusable. Since then, I have updated the ROM with one supplied to me directly through highpoint support (why is it not on their website? No clue) and I have made it through 2 lengthy sleep cycles with NO issues. I'm booted off a RAID-0 as above, but I also have a 3TB Time machine disk and two RAIDs (a 10 and a 0) hooked up as well through two port multipliers.

Problems with sleep are common with a great many controllers whether they be USB, firewire, eSATA, and yes, Thunderbolt. You can turn off computer sleep (but keep display sleep) in system preferences.

On my RocketRAID 2314 I did had this problem. When I turned off sleep I could have my computer on for weeks with no issues (yay global warming!).

It is very fast but clearly does not max out these EVO drives which should be pushing 900MBps. The card itself maxes out at PCIe 2.0 2x which is 1,000MBps, this seems standard with all the eSATA III cards I've seen.

As far as how this kind of upgrade affects the speed of day-to-day tasks: obviously when editing video that requires this kind of throughput, this is indispensable... but I don't do that kind of work. What I can say is that I was previously booting off an older Intel 80GB SSD and this is simply snappy as all get-out. I can open 10 programs at once and they are instantly ready to go. The only limitation is that my main user-folder is on platter drives (I need the space), but the difference is measurable even with just the Apps and the OS on this drive.

nice review and good speeds. does the 642L have the same speeds?

i-rui said:
nice review and good speeds. does the 642L have the same speeds?
Click to expand...

I found out that they RocketRAID 642L and 644L both use the same Marvell 88SE9235 chipset. They should act identically.

Here are some benchmarks with the 642L.
I

Obviously not a RAID card, but enables 6gbps.

Highpoint support just emailed me this ROM which makes the card bootable (like magic!). I'm going to install Mavericks on it now.

Concorde Rules said:
FYI: Any card based on the 88SE9230 chip is bootable, the Rocket 640L for example.

Obviously not a RAID card, but enables 6gbps.
Click to expand...

The card is listed as "parallel scsi" in OS X and doesn't show if TRIM is supported or not. I've sent a message to high point, but what do you think?
I

This is what I get (see screenshots in my thread):


As far as I know, Trim, AHCI, etc was enabled, both in Windows and OS X.

Never had any problems though.

Are you talking about Mac web management software for the card that allows flashing or is it Wndows only?

DanielCoffey said:
Are you talking about Mac web management software for the card that allows flashing or is it Wndows only?
Click to expand...

The included webGUI software can flash in OS X now too. I did it today.

By the way, this card does not support TRIM according to them. I think it's because the driver makes it not use the AHCI stuff.

Luckily my Samsungs have automatic garbage collection (though it's not as efficient).

Updated info about Bootcamp and Disk ejects. Looks like this has the same problems a lot of other cards do (but is still useable if you turn off sleep).
I

slughead said:
Updated info about Bootcamp and Disk ejects. Looks like this has the same problems a lot of other cards do (but is still useable if you turn off sleep).
Click to expand...

just curious, are you speaking about highpoint cards? i wasn't aware of sleep issues with them.

i-rui said:
just curious, are you speaking about highpoint cards? i wasn't aware of sleep issues with them.
Click to expand...

There was another thread about the 640L having sleep issues, I believe.

The 640L needed its firmware updated which resolved the Wake from Sleep KP. The Highpoint website has even got a newer firmware for the 640L since then but no documentation.

My array's hooked up and humming.

Because I reinstalled Mavericks, I had to re-associate my time machine using this article.

So far everything's working great. Backing up from one software RAID to my TM disk.


DanielCoffey said:
The 640L needed its firmware updated which resolved the Wake from Sleep KP. The Highpoint website has even got a newer firmware for the 640L since then but no documentation.
Click to expand...

I'll try sleeping the thing next since I haven't done it since I updated the EFI. Perhaps since the 640L update fixed the issues with that card, the 644L update will fix the sleep issues with this one. My computer hasn't "slept" in years. Wish me luck!

Put it to sleep 16 hours over the past 48 and everthing's working fine! I updated the review to reflect this.

slughead said:
IT BOOTS!!
Highpoint support just emailed me this ROM which makes the card bootable (like magic!). I'm going to install Mavericks on it now.
Click to expand...

Can you tell which version you had and have now?
A

Sorry to wake this old thread but:

If I installed such a card, would it be possible to setup 2 SSDs in RAID-0 and run Filevault 2 on them, all the while using them as a OS X boot volume?

Thanks for any response!
T