Safari - help me love it!

I'm on Mavericks, Safari 9.0.1, no extensions. I use Chrome, and have used it for years now. However, Chrome has a horrible problem with memory leaks, and in time it starts hogging huge amounts of memory - that's how it works for me.

So I keep trying Safari, and have been trying it for years now. I force myself to use it for like weeks, but in the end just give up because to me it's just such an inferior browser compared to Chrome and even Firefox. But I keep hearing about how people love Safari and so I figure I must be doing something wrong, or just don't know how to unlock all the Safari goodness.

My main complaints against Safari are that it is extremely user unfriendly and insecure compared to Chrome. User unfriendly - one example: private browsing. In Chrome, I can just open a new window that is Incognito, and it appears, nothing more to do - with Safari, I can't just open a new PB window, instead I have to turn on Private Browsing, and when it appears, there's a dialogue box that I now need to confirm... so many steps, so many clicks, so unfriendly.

But much worse is the poor security. I find Safari very bad at handling pop-ups and re-directs/hijacks - compared to Chrome. I've run a test on the same site, and Chrome lets me browse with minimum issues, while Safari just gets so completely hijacked that the only way out is to force-quit the browser.

However, I'm openminded and willing to learn. So, fellow mac users - how can I learn to prefer Safari over Chrome? TIA!

I'm a big Firefox user, but Safari always wins in terms of a smooth UI and fancy animations. Firefox just doesn't feel completely native, which might actually matter for some people.

I'm not into Chrome because of Google. Some Safari users might also agree with me.
Reactions: Ulenspiegel
Comment
E

OldCorpse said:
with Safari, I can't just open a new PB window, instead I have to turn on Private Browsing, and when it appears, there's a dialogue box that I now need to confirm... so many steps, so many clicks, so unfriendly.
Click to expand...

It's just one right click on Safari in the Dock and then choose new private window: 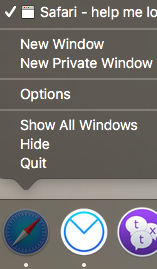 I've forced myself to use them all and always find that Chrome works very well for me. I often have dozens of tabs open in Crome and it remains fast and rock-solid for weeks at a time until I close it occasionally to allow it to update.

I guess I may be the only one that has never had any problems with Chrome being slow or having memory issues. I use Chrome on many different Macs and really have never had the issue that I hear reported on forums. I know that the OP mentioned using no extensions which is great. I think that the majority of folks with Chrome issues likely have a massive number of unnecessary extensions running. The only other thing that might be different on my Macs is that none of them have Java installed, and Flash is disabled in Chrome's advanced settings.
Comment

I'm not sure what to tell you – I've always thought Safari was the superior browser and felt similarly odd about Chrome and Firefox. I'm sure it's all somewhat subjective, and everyone's got their preferences about what they care about when browsing.

I say that not really having had pop-up problems, though – I'm tempted to ask what sites you're visiting. ^_^

And Private Browsing? Command-Shift-N (in the current version, at least) opens a private window instantly.
Comment

Pakaku said:
I'm a big Firefox user, but Safari always wins in terms of a smooth UI and fancy animations. Firefox just doesn't feel completely native, which might actually matter for some people.

I'm not into Chrome because of Google. Some Safari users might also agree with me.
Click to expand...

+1. I agree with you 100% and share your sentiment about Google and its browser.

@OldCorpse: It's not a grateful task to convince somebody to change personal preferences. Nobody could've talked me into using iExplorer instead of Netscape and later Firefox under Windows. When I bought a Mac my first step was to download Firefox, but it never felt the same ("completely native" as Pakaku put it). So, I started using Safari. Was not easy to get used to it. And I had two major problems with it. First, you have mentioned, the handling of pop-ups and hijacks. Could be partially solved by employing uBlock. Second, it could not remember the size of sites you have zoomed to. Managed to solve the problem using ZoomBySite. After some months, with the "tricks" mentioned above, I got used to it and even liking it.
Last edited: Nov 7, 2015
Comment

Thank you everybody who has chimed in so far. The option to open a private browsing new window is not available in my version of Safari (I guess that does not come with Mavericks Safari) - glad to hear it can be solved by upgrading to El Capitan.

I suppose following Ulenspiegel installing some help like uBlock could take care of the security issues.

In general I always had the feeling that Safari was perpetually playing catch-up with Chrome, what with using the address bar as a search box that only came way after that was the default in Chrome, and with finding which tab has autostart audio to kill it and so forth. I guess as long as they DO catch up, it's all-rightish, although it would be nice if Safari could lead as well as follow.

On the plus side, I always found Safari pretty fast.

I think I'm slowly moving to being positive about Safari, so thank you everybody
Comment

6 months ago I made the jump to Safari after going back and forth several times and always primarily using Chrome for years. Loving Safari.
Comment

OldCorpse said:
But much worse is the poor security. I find Safari very bad at handling pop-ups and re-directs/hijacks - compared to Chrome.
Click to expand...

Isn't that just your Chrome talking back to Mummy Google and getting popup blocking from there? Personally I don't have an issue with Safari's behaviour and continually getting popups - guess I don't visit "those" sites ;-)
Comment

Oh, OldCorpse – adding to the keyboard shortcut I mentioned earlier; I thought I remembered having this in Mavericks too. Now I recall why; I added it myself in System Preferences > Keyboard > Shortcuts. You can tether any key command to any key command-less menu item, if that's any good for you.
Comment
You must log in or register to reply here.
Share:
Facebook Twitter Reddit Email Share Link
Register on MacRumors! This sidebar will go away, and you'll see fewer ads.
Sign Up
Top Bottom