Samsung yesterday announced the opening of its new flagship store in New York City, describing it as "the flagship of the future", but in a curious twist, one which does not actively sell Samsung products.

Named simply "837" after its address in the popular Meatpacking district, the "living lab and digital playground" is a 55,000 square-foot space that includes a three-story digital screen (made up of 96 Samsung 55-inch TV sets stitched together), a 90-seat theater, a portable demo kitchen, an art gallery, a multimedia studio, and a café. Product shelves however are nowhere to be seen. 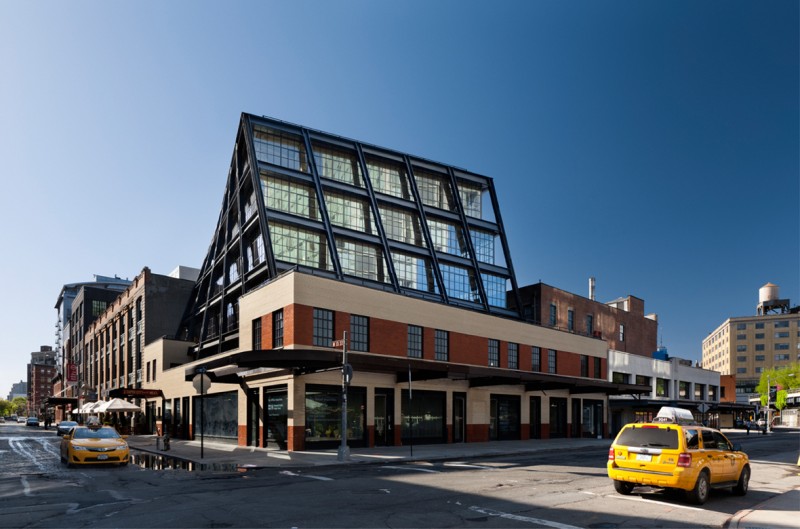 Samsung 837 in New York's Meatpacking district (Image: Mashable)​
According to a Samsung press release, the store sets out to "reimagine the traditional store experience" and provide an opportunity for people to "experience Samsung technology and signature services in an environment that blurs the lines between live and static experiences." 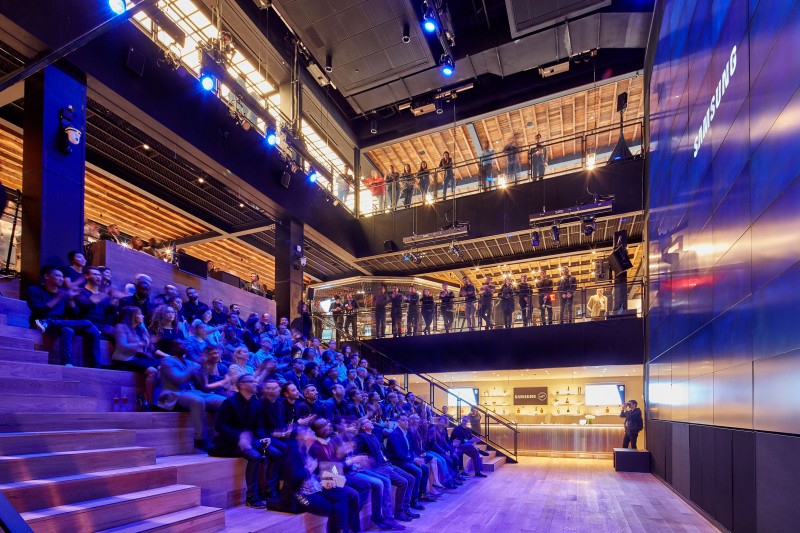 The Screen and mainstage (Image: Business Wire)​
"It's not about pushing products in people's faces," explained Zach Overton, General Manager of Samsung 837, speaking to Fast Company. Rather, Overton calls it "a fully immersive cultural center, featuring programming which will tap into people's passions such as art, music, entertainment, sports, wellness, culinary, technology and fashion, all powered and enriched by technology." 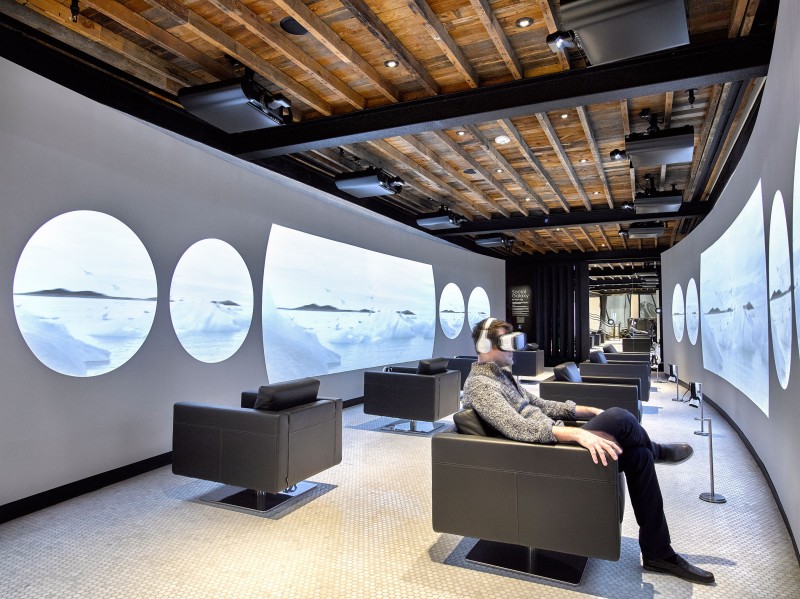 Visitors wear Samsung's Gear VR in a dedicated VR environment (Image: Business Wire)​
Mashable got a sneak preview of the store and describes an area called the Selfie Station, where users are invited to take a photo of themselves with a Samsung smartphone. A few seconds later, that photo is projected onto the huge store screen for everyone to see.

Of particular note is the store's "Black Egg Installation tunnel":

Before you enter the tunnel, you're instructed to enter in your Instagram handle. Then you walk through a tunnel where all of your photos, hashtags and Instagram descriptions are projected against screens that literally cover the entire space. The floor and ceiling are mirrored, giving off a truly sci-fi effect.
Click to expand... 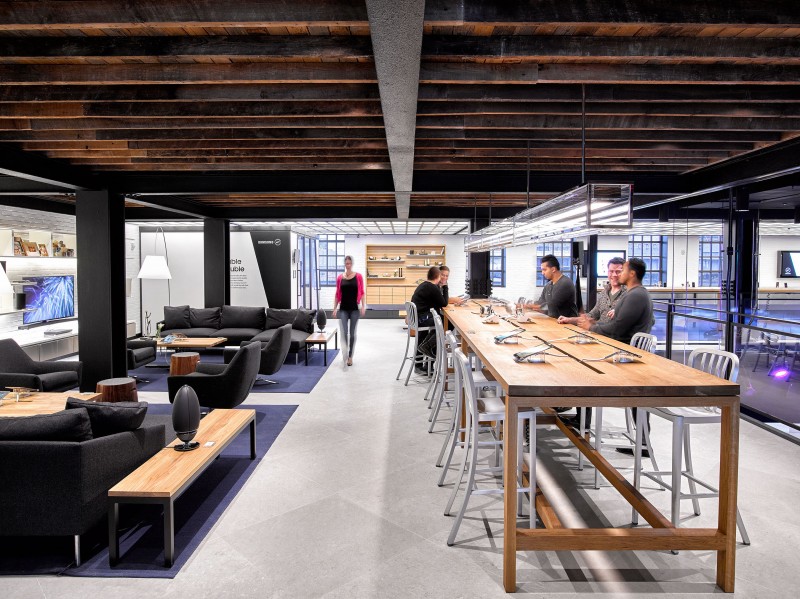 The Living Room and product table (Image: Business Wire)​
Despite the company downplaying the retail angle, store staff are available to guide customers through Samsung's online purchasing portal, while in a nod to Apple's Genius Bar concept, on-site technicians are on hand to troubleshoot tech problems.

In the first two weeks of opening, Samsung 837 will be host to exclusive programming including live DJs, Oscar-nominated movie screenings, and a private Oscar viewing party.

Yesterday, Samsung announced the Galaxy S7 and S7 Edge, the latest devices in its flagship line of smartphones. The phones will be available on all four major U.S. carriers from March 11, although it's unclear when (or whether) visitors to 837 will have the opportunity to test them out in-store.

That looks kinda cool. Reminds me of some experience stores I visited in Tokyo.
Reactions: ceva321, macs4nw and 69Mustang

I love the idea of a Product Table.
Reactions: Heltik

I get a vibe that this is the type of music experience and overall "cool factor" you'll get inside...

Samsung's ridiculously overdone and ultimate self-serving "store" of bufferoonery. What an excessive waste. Apparently it's not enough to sell product by traditional means, so instead, we must stroke and coddle nitwits' whims and egos to push some phones and tablets. Call it experiential selling? I call it a bored company with money to burn. Who cares.
Last edited: Feb 23, 2016
Reactions: rhett7660, uid15, appledefenceforce and 1 other person

I hate the way all Samsung products look and feel.

Gee, that looks like a prime location... Maybe when Samsung opens up on 5th Ave. Apple will take notice.
Reactions: ceva321

Col4bin said:
Samsung's ridiculously overdone and ultimate self-serving "store" of bufferoonery. What an excessive waste. Apparently it's not enough to sell product by traditional means, so instead, we must stroke and coddle nitwits' whims and egos to push some phones and tablets. Call it experiential selling? I call it a bored company with money to burn. Who cares.
Click to expand...

Your comment would make sense of the place didn't also have things like giant displays, kitchen appliances, and mock homes settings inside. From what I've read the phones and tablets are barely there.
Reactions: ceva321 and 69Mustang
S

Already some hate on this thread which is ridiculous. Don't go to the store then if it doesn't appeal to you. Personally, it sounds like a fun experience - regardless of what tech is driving it.
Reactions: ceva321, melendezest, 69Mustang and 1 other person
M

furi0usbee said:
Gee, that looks like a prime location... Maybe when Samsung opens up on 5th Ave. Apple will take notice.
Click to expand...

Welcome to "SamsungRumors". (No? Where are LG G5 news or others?)
Reactions: appledefenceforce
S

furi0usbee said:
Gee, that looks like a prime location... Maybe when Samsung opens up on 5th Ave. Apple will take notice.
Click to expand...

And Apple has a store not too far away.... in the meatpacking district

Indeed. The OP he was responding too is ignorant. First, that Apple has a store in that district. Also that to have the space that Samsung needed for this type of store, they couldn't possibly do it near 5th Ave as easily.
C

Reminds me a lot of the Sony exhibit building on Ginza in Tokyo.
M

Nobody said "Tunnel of Pron" to the instagram tunnel?

samcraig said:
Already some hate on this thread which is ridiculous. Don't go to the store then if it doesn't appeal to you. Personally, it sounds like a fun experience - regardless of what tech is driving it.
Click to expand...

I'm a diehard Apple fan but I agree. this is actually a pretty cool idea! Apple has got the "wow that's beautiful" concept down pat in their stores but with all the hype around Angela when she was hired, I thoroughly hoped that she was going to bring in the "wow that's cool!" feeling.
E

There is already an Apple store nearby where provides public bathroom. Open somewhere distant place where public bathroom is precious commodity in Manhattan.
A

I think Samsung finally gets it. Their ads have beaten apple in some cases, especially as of late. Some of their phones don't copy apple's style. This store is definitely geared toward their strengths/experiences. I'm not a Samsung user, but it is apparent to me that they finally are getting it in terms of experience.
Reactions: ceva321

advancewarsbest said:
I think Samsung finally gets it... Some of their phones don't copy apple's style.
Click to expand...

I think that it takes more than Samsung's phones not copying Apple's style for them to get it. Samsung needs to create a phone that causes Apple to want to steal from Samsung's style in order to have finally gotten it.


advancewarsbest said:
Their ads have beaten apple in some cases
Click to expand...

One thing that Apple is unbeatable at is marketing. Their ads are the best in the business. Apple Watch Rise, The Future of Television, and Someday at Christmas are examples of great recent commercials.
Reactions: appledefenceforce

samcraig said:
And Apple has a store not too far away.... in the meatpacking district

When I go to NYC, I don't venture that far south and west. I'll be going this spring, so I'll check it out. Maybe the photo didn't do the area justice
J

While I don't think this is going to do a whole lot of Samsung's brand, I do appreciate that they took the time to come up with something new in terms of aesthetics and concept and layout. This doesn't look like an Apple store at all.
Last edited: Feb 23, 2016
Reactions: ceva321 and melendezest

In the near future all brick and mortar stores could become demo only. Demo the product and the have the product delivered the same or next day. A concept that I use now with online retailers now.
You must log in or register to reply here.
Share:
Facebook Twitter Reddit Email Share Link
Register on MacRumors! This sidebar will go away, and you'll see fewer ads.
Sign Up
Top Bottom