About ten months after the first reported cases of Galaxy Note 7 fires began circulating online, Samsung is gearing up to re-launch the smartphone "initially" only in South Korea, according to people familiar with the company's plans (via The Wall Street Journal). Referred to as the Galaxy Note 7 FE, or "Fandom Edition," the launch is said to be coming on July 7 in the country, and it'll represent the third debut for Note 7 devices following the original launch last August, and a widespread recall and replacement later in 2016.

Even those replacement devices caught fire, but Samsung has chosen to continue the Note 7 brand with the new Fandom Edition and bring a "relatively modest" stock of inventory to retailers in South Korea. In total, it's believed 400,000 Note 7 Fandom Editions will debut among three major telecom companies in the country. 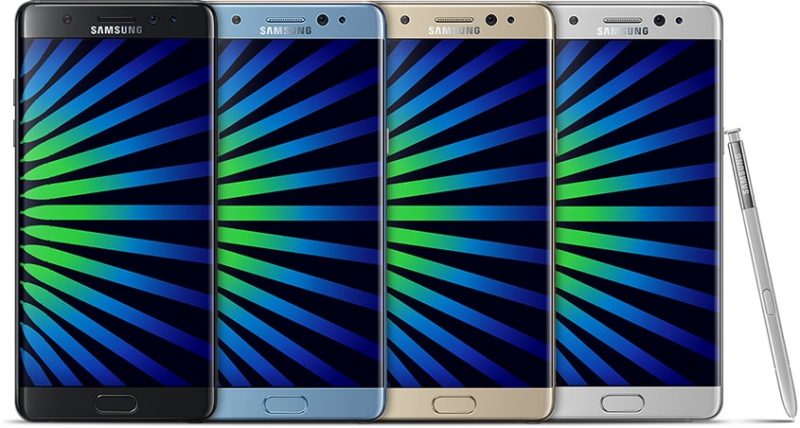 Samsung will bring the Fandom Edition to market "with different components," instead of the faulty battery components that caused the first launch and some replacement devices to catch fire. Any word on a wider launch for the Fandom Edition was not mentioned by the sources.

A refurbished version of the premium smartphone, whose global recall last year garnered unwanted attention for the South Korean technology giant after some caught fire, is coming to retailers' shelves on July 7 with different components under the name Galaxy Note 7 FE, according to people familiar with the matter.

The refurbished Note 7 will be priced below 700,000 South Korean won ($616), although smartphone prices are generally adjusted up to the point of release due to fluctuating market conditions, the person said.
Click to expand...

Samsung's intent to keep the Note brand alive was detailed in a report earlier this month, which also pointed towards the unveiling of the Galaxy Note 8 coming sometime in August. Since the Note 7 was discontinued, Samsung released the mid-cycle Galaxy S8 smartphone in April, with the company saying pre-orders for the device were its "best ever" and analysts suggesting that the S8's messaging and launch helped it to begin recovering from the Note 7 disaster.

Good luck trying to sell that thing to anyone lol..
Reactions: Cameroncafe10a, t1meless1nf1n1t and nburwell

Could we send them to North Korea instead?
Reactions: macs4nw, BlueParadox, Cameroncafe10a and 15 others
M

MR you have a misprint. Pretty sure FE really means “Fire Edition.” ;-)
Reactions: jef82, BlueParadox, Cameroncafe10a and 8 others
C

What does the back look like? How do you prove it is not an original Note 7 at the gate?

If people are wondering why they're doing this, it's because Samsung lost $9.5B in revenue from the fiasco. They gotta make that money back somehow.
Reactions: Cameroncafe10a and Will.O.Bie

Usually after a phone is out for about a year, it gets discounted. Combine this with the recall, I'm expecting double discounts to make this note 7 cheap, if Samsung wants Note fans to buy it.

From the rumored prices, it doesn't sound like it.
G

Well this is certainly explosive news isn't it oh for the love I'm so sorry it's basically an impulse at this point. My bad. I'll leave.
Reactions: Cameroncafe10a and tongxinshe

MrX8503 said:
If people are wondering why they're doing this, it's because Samsung lost $9.5B in revenue from the fiasco. They gotta make that money back somehow.
Click to expand...

It’s likely more than just the money. They have a large number of phones they must do something with. They cannot just toss them into the trash due to environmental reasons.
L

And people say Apple fans are nuts.
Reactions: philosoraptor1, Cameroncafe10a, tongxinshe and 2 others

Jokes aside, if fixed, it compares well to anything that is out now and could be a good buy. If not truly fixed, then it would be a good bye. Okay I'll just show myself out of this discussion.
Reactions: Telp, Goatllama and Analog Kid
M

Why not just melt them down and be done with it. Just greed.

That was my first thought.

Any native English speaker would immediately think of "Fire Edition" with "FE".

Either Samsung wasn't paying attention, or this is just another example of their often wry sense of humor about tech and its bigger fans.

Well maybe not the Fire Edition

CerebralX said:
Good luck trying to sell that thing to anyone lol..
Click to expand...

I'd buy it. Not at full retail, but I'd definitely buy it.
M

Samsung is so cheap. Can't handle losing money on this fiasco.
Reactions: jef82, Cameroncafe10a and t1meless1nf1n1t

interesting name... why "fandom edition"... because only the hardcore fans would want it?

That aside I did buy a note 7 which I was going to use until Apple changed their design in Sep-2017, and to be honest I loved the phone itself, its an amazing device.... It's just Android that I couldn't deal with. Either way I was going to ride it out because I liked the phone so much, but then they started catching fire and the rest is history.... I ended up getting the iPhone 7 plus anyway.

69Mustang said:
I'd buy it. Not at full retail, but I'd definitely buy it.
Click to expand...

You can do a lot better with that type of money.
Reactions: t1meless1nf1n1t

Nah, probably not. But "fandom boys" will buy it.

Boy, this is scarcely opportunistic at all...

Michaelgtrusa said:
Why not just melt them down and be done with it. Just greed.
Click to expand...

It's like asking why Apple doesn't just melt down the millions of iPhones it has had returned to it, instead of sending them back to Foxconn to be remanufactured, or selling them as refurbished.

jiggad369 said:
You can do a lot better with that type of money.
Click to expand...

Not in my opinion, which of course is subjective. But it is, and this is key here, the only opinion that matters. I don't say that to be dismissive of your comment. It's just the unvarnished truth. When I choose a new phone (most recently an S7) I typically "field test my top 3 choices" - one of the only benefits of my company's unfortunate contract with Sprint.

With my last 3 phones, the S series has come out on top. I never really liked the size of the Note, but my wife's new S8 (former 6S user) has changed my mind. The 6S went to my oldest and her 6 went to my youngest. As for a refurbed Note, if it was offered, I'd consider it - caveat being, the battery issue is actually solved. The battery issues notwithstanding, I though it was an excellent handset.

You didn't ask, but why no iPhone in the mix in my top choices? Good question, glad you asked. The iPhone could have easily been in the mix, 'cept one fatal Mustang flaw: lack of choice in default apps. That is a non-starter. Default app choice would put iPhone in the mix for my next phone.
Last edited: Jun 28, 2017
You must log in or register to reply here.
Share:
Facebook Twitter Reddit Email Share Link
Register on MacRumors! This sidebar will go away, and you'll see fewer ads.
Sign Up
Top Bottom