Samsung may be working on an "iPad Pro" style tablet of its own, with a new report from SamMobile suggesting the company is currently in development for the tablet, codenamed "Tahoe," on an Android 5.1 Lollipop-based operating system and with an 18.4-inch screen. Samsung would target the tablet to enterprise and educational environments, with a lesser focus on day-to-day personal usage than the company's current line-up of Galaxy tablets. 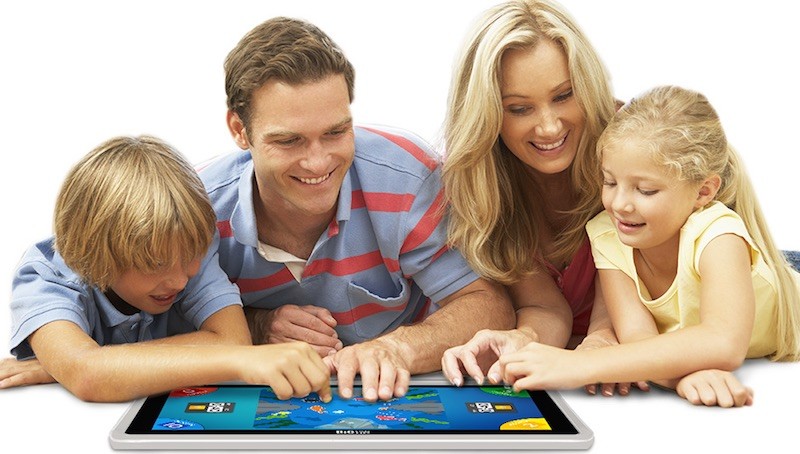 The kid-centered nabi Big Tab 20-inch tablet​
​
The rumored tablet -- with the model number SM-T670 -- will feature a TFT LCD screen with a resolution of 1920 x 1080 pixels. The Lollipop system will be powered by an octa-core 64-bit 1.6GHz Exynos 7580 processor, include 2GB RAM along with 32GB internal storage, with the option to expand thanks to a microSD card slot that supports up to 128GB cards. According to SamMobile, the tablet will also measure 451.8 mm wide by 275.8 mm tall and be 11.9 mm thick.

Apple is rumored to be developing its own larger-screened tablet, the so-called iPad Pro, which is believed to include a 12.9-inch screen. If Samsung's 18.4-inch "Tahoe" device does become available, it'd be one of the biggest tablet on the market, with a screen that's about 10-inches tall by 17-inches wide, far larger than most standard laptops.

That's not a tablet, it's a space station.
Reactions: coldsweat, CombatCaptured, the-oz-man and 45 others
Comment
M

Only Samsung could make a tablet that is harder to carry about than the old 17" Macbook Pro
Reactions: CombatCaptured, imanidiot, Apple Human and 16 others
Comment

I thought this was something from the Onion at first.
Reactions: CombatCaptured, Lancetx, imanidiot and 34 others
Comment

The kids are coming over? Let me grab my 52" iPad off the wall...
Reactions: CombatCaptured, imanidiot, Apple Human and 14 others
Comment
M

A 18.4-inch tablet? I do not think that would be useful (there are already hybrid devices that work as a PC and as a tablet), so we would have to see how many "tablets" Samsung sells
Comment

I think they just need to do a water proof table size tablet and we should be golden.
Reactions: shamino and H2SO4
Comment

What an odd promotional image for the nabi Big Tab; a luminescent display wouldn't have soft shadows cast on it, so their hands appear to be floating above an image of the product. Here's some pro bono work, nabi:

Lol, yeah... that pic looks realllllly appealing.
I'm sure most four person families want to try to use the same app on the same tablet at the same time.
*smh*
Reactions: Lazy, imanidiot, mafaky and 2 others
Comment
2

I am holding out for the 50inch tablet that will double as my TV.
/s
Reactions: imanidiot, Apple Human, IrrationalFanboy and 3 others
Comment

Could make a pretty nice table for me to put my MacBook on.
Reactions: imanidiot, Apple Human, lewismayell and 7 others
Comment

What's the cut-off point between a tablet and a door?
Reactions: CombatCaptured, Lazy, Lancetx and 26 others
Comment

I'm surprised they haven't released a Rose Gold phone yet, since they like to release products that Apple is rumored to be making before Apple releases them so they can say they were the first, much like their smartwatch. Then, after Apple releases their product, they borrow ideas from it and incorporate it into their next generation products (just look at their UI from the Gear S2).

I'm pretty sure it's been established that the more expensive tablet sector is the "adult" sector, while kiddos are responsible for the proliferation of $50 Walmart Android tablets...
Not sure trying to force the opposite is a good idea Samsung.
Reactions: retep42
Comment
K

I misread the codename as Table rather than Tahoe.

I think Table would be more accurate.
Reactions: GrumpyMom and madsci954
Comment
N

Maybe this will shame Apple into releasing a 17 inch notebook. You know for those of us that work remotely and actually do more than Facebook, Twitter, and/or Reddit.
Reactions: CombatCaptured, fullauto, retep42 and 1 other person
Comment
H

RiddlaBronc said:
I think they just need to do a water proof table size tablet and we should be golden.
Click to expand...

I reckon that’d be great.
18” is too big though, (for a tablet anyway right guys?). Until Apple make one of course and then it’s the perfect size.
Reactions: Piggie, stroked, big-ted and 1 other person
Comment
H

Tycho24 said:
Lol, yeah... that pic looks realllllly appealing.
I'm sure most four person families want to try to use the same app on the same tablet at the same time.
*smh*
Click to expand...

Don’t be so ridiculous. They may want to play a ‘board’ game. They might even want to look at the same web page together without head butting each other into a coma.
Reactions: nortofthe13th and Sandstorm
Comment

That's a lower PPI than even the original iPad released in 2010. Should be 4K at that size.
Reactions: CombatCaptured, Apple Human, Mainyehc and 6 others
Comment
C

Awesome so now when friends come over we can play Twister on the tablet now.
Reactions: imanidiot, Apple Human, AirLinc and 9 others
Comment

AngerDanger said:
That nabi Big Tab promotional image features some odd editing. Why are their arms and hands casting shadows on a luminescent display? To enhance surrealism?
Click to expand...