So I did what PC Magazine and a switchblade couldn't - I've scratched the front glass of my iPhone. I'm still not completely sure how, I baby the thing pretty well - but in a rush to pick up takeout last night, I didn't put it back in the case, and went straight in my pocket, so now it looks like this. 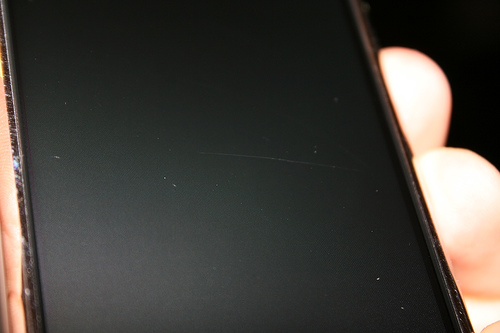 So they say this is opticians glass - is there any known way to fix that? It seems not terribly deep. I can feel it with my nail when I move over, but you have to tilt to see it, and it doesn't show in bright webpages (just dark ones).

Tried bringing it to Apple (soho) for advice. They were all amazed, sympathic, but unhelpful.

Thanks for any advice.

you might want to try some sort of silicone adhesive, or something that will cover the fine scratch lightly, but not show - like a car scratch remover works per say.
J

ChandlerXJ said:
you might want to try some sort of silicone adhesive, or something that will cover the fine scratch lightly, but not show - like a car scratch remover works per say.
Click to expand...

Did you mean silicone abrasive?
S

I have the same problem - difference is, I know how mine happened - I was so pumped about that pcworld stress test that I took out my keys in front of a bunch of colleagues and, without hesitation, scraped my keys all over the front of it - people were more impressed that I did it than that it didn't scratch so, others asked "are you afraid of breaking/scratching it?" and my standard response has been to either rub my keys against it (if they asked about scratching) or simply drop it straight down from wherever it was if they asked about breaking - a couple of cocktails, a couple of demonstrations and I woke up the next morning with a fairly sizeable scratch, though I'm not sure specifically when it happened....

in any case, I was thinking I could use one of the stone polishing tools that came with my dremel to buff the scratch out but am reluctact to be the first to try it - anyone have any advice or suggestions?
You must log in or register to reply here.
Share:
Facebook Twitter Reddit Email Link
Top Bottom