Anyone using one with their MAC? How effecient are they? Would they be alright to back up everything on my MAC?

I've got a 120gb MBP and am looking at the 160gb seagate external firewire drive. What do you guys think?

On the Left Coast - Victoria BC Canada

Apart from that's a photo of the USB model...
The firewire drive is just fine.
I still have a preference to buy the Seagate IDE drive by itself, to get the full 5 year warranty, and then put it in a MacAlly Firewire aluminum case.

I take issue with their slogan more than the drive itself.

I have a Seagate external that is both firewire and USB. I have it partitioned so that one partition is the same size as the HD on my PB for my SuperDuper clone, and the other partition is whatever is left. On that I store my music and photos and any extra files I want to have off my HD. Works perfectly. Drive is pretty quiet, not totally quiet, but not obtrusively noisy. I like it just fine.

CanadaRAM said:
I still have a preference to buy the Seagate IDE drive by itself, to get the full 5 year warranty, and then put it in a MacAlly Firewire aluminum case.
Click to expand...

I have to agree with this... it's basically the same thing but is MUCH cheaper to just buy the drive and enclosure seperately.

CanadaRAM said:
I still have a preference to buy the Seagate IDE drive by itself, to get the full 5 year warranty, and then put it in a MacAlly Firewire aluminum case.
Click to expand...

What about something like this w/ a seagate 200gb IDE internal drive? LINK
M

That's what everybody is saying, and what I'd probably do myself. I will note as a vote against Seagate's externals that shortly after they announced their 300GB and 400GB drives a while back, they had some VERY good deals on the 300GB version in their external enclosure. But from what I read, at least the first batches had a horrifying failure rate.

I assume they've worked these kinks out, but roll-your-own is almost universally cheaper and you get 5X the warranty on the drive to boot. What's to lose?

(By the way, I'd just go to DealMac and look for an enclosure you like there--you might save $5-10 by buying on eBay, but is that really worth is when you can get whatever you like from a reputable dealer? Besides, the particular auction you linked is a total ripoff--sure, the Buy It Now is $20, but look at the shipping--US $22.95, plus $2 required for insurance. They're obviously just lowballing the price and making it up in shipping, which is shady at best. I'm sure you can find the identical case for that total or less, shipped, from a legit online store.)
B

Gone but not forgotten.

I'd rather have Seagate than another brand. I recently bought a 2.5 inch drive in their own enclosure and it works fine but it came with no power adapter and requires two USB 2.0 ports to work.

comictimes said:
I have to agree with this... it's basically the same thing but is MUCH cheaper to just buy the drive and enclosure seperately.
Click to expand...

The seagate external 160gb hard drive is only $80 with free shipping on eBay.

I just priced it out right now. The external drive is a better bargain.

Since I had already placed a bid earlier, I went with the internal drive + external enclosure setup. It came out to the same price as an external 160gb seagate hard drive. 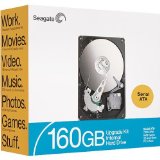 A few weeks back I saw a decent deal and as I had never backed anything up before, I decided to go for it. From Fry's/ Outpost.com, there was a 300GB, 7200RPM, 16MB cache USB/FW external Seagate for $151 (taxes included), no rebates or anything to mess with. The fact that I really really am quite technologically-challenged, made this a simple choice for me.

I like it. Not too noisy, not too big... and although it only comes w/ a 1 year warranty, I figure I'd probably fill it up before that and that by this time next year, there will be a bigger, cheaper, and more reliable HDs by then.

Seagates are good drives. However, I noted several things about your situation.

First, while it is definitely cheaper to buy enclosure and drive separately, I'm not sure it's efficient to buy a 160GB drive and external enclosure. I think it makes sense to buy a bigger drive for not much more money. You have to hunt or wait for a deal, but f.ex. TigerDirect recently ran a Seagate 300GB 8MB cache drive and an external FW/USB enclosure for $99 total (after a manufacturers rebate). You can frequently buy 300GB 8MB cache Seagates under $100. So far I've bought 2 (both from TigerDirect), and I'm in the market for another one.

Second, the price comparison you showed is not valid. The external drive you showed is a USB only drive - no good. I can easily buy an external enclosure that's USB only for $9.99. You rightly wanted a FW/USB drive - that'll cost you more.

Third, in the picture of the external Seagate drive, I notice it says 7200RPM, but only 2MB of cache... no good. You want 8MB minimum, and 16MB would be nice.

Bottom line, I think it makes sense to buy a 300GB 8MB cache Seagate, and use dealmac.com to find the deal. Good luck!

OldCorpse really good tips. It makes good sense as internal drive are cheap until you get to 320GB and above. I know the difference between a 160GB drive and a 250GB drive is like AUS $20-35 difference.
A

Dumb question, but why have so many people mentioned having a firewire drive as important? Would a USB 2.0 drive not be compatible with macs for some reason? And wouldn't it be faster (480 vs 400 mb/s)?
B

Gone but not forgotten.

austere said:
Dumb question, but why have so many people mentioned having a firewire drive as important? Would a USB 2.0 drive not be compatible with macs for some reason? And wouldn't it be faster (480 vs 400 mb/s)?
Click to expand...

You can boot from a FireWire drive. USB 2.0 drives are fine, they're just not quite as useful. You could even boot from an iPod, as far as I know.

austere said:
Dumb question, but why have so many people mentioned having a firewire drive as important? Would a USB 2.0 drive not be compatible with macs for some reason? And wouldn't it be faster (480 vs 400 mb/s)?
Click to expand...

One issue is, as bousozoku mentions the booting: can't do it from a USB drive, but you can from a firewire one. Also, the speed numbers are somewhat deceptive, because in practice, for sustained data transfer FW is actually faster than USB 2.0 (FW 400, not mentioning FW 800 here at all).

Another issue is that many pros (mostly musicians and video editors) feel that firewire drives give them a better and more reliable data transfer stream than USB. How valid this is, I don't know, but FWIW that's a frequent recommendation when folks are having problems with USB drives and various audio programs "switch to FireWire".

OldCorpse said:
One issue is, as bousozoku mentions the booting: can't do it from a USB drive, but you can from a firewire one.
Click to expand...

Apparently this is no longer true of EFI-based Macs.
V

I checked out those MacAlly enclosures... they're ugly little guys... and expensive.
G

I just wanted a plug and play model FW HD, quick, before I lost all my data and huge iTunes library, so bought a USB/FW Seagate 400GB, 16mb drive from Freys for $200 + Tax and shipping which was about $30.

Frey's had it mislabeled in their print ad as a 7200.9 model drive, it was an in-between model the 7200.8 with the large 16mb cache. I was warned to watch out for Frey's printed ads being incorrect.

Getting the 5 year warranty would have been nice, but backing up as quickly as possible was the goal and I got kinda stuck figuring out which external case to buy and if I should spend the extra and get a FW/SATA enclosure. So the large plug and play 400GB drive for $200 seemed OK.

A few issues to consider. If one needs the speed, say for video editing, the wave of the future for drives is SATA. This will require a SATA PCI card that matches. Drive's data transfers get theoretically faster with each version 7200.8, 7200.9, and they just released the 7200.10. But I'm not sure what other ancillaries are needed to realize the faster data transfer speeds.

Also, the Seagate comes with an "initio" FW chipset, as compared with the more well known Oxford chip. From what I've read there were various compatibility problems with "initio" chips and some Macs and the initio chips were not tested or recommended with some software, like Super Duper Backup, but it works fine, with my G4 FW. Apparently, earlier initio chip incompatibilities have been addressed. If I had to do it over, I would have got a separate case with the standard Oxford FW chipset.

Also the Bounceback Express that comes with the complete Seagate HD is not Fire Wire bootable unless you buy the more $49/59 full version. I bought Super Duper backup SW for half the price.

I was concerned about the fanless plastic case that came with the Seagate drive, but after using the drive intensively, it runs surprisingly cool and the enclosure seems to be well vented. An enclosure with a fan or heatsinks seem like they would have been unnecessary. Figured Seagate would not put their own drives in cases that ran too hot.

Although the idea of nicely engineered heatsinks inside a case, seem like a good idea, I don't think that modern Seagate drives are run nearly as hot as drives of an earlier vintage did? I've read that heat is the #1 killer of HD's, but it seems like excessive heat problems may have been addressed from within the design of the drives.

I'll wait to buy an external SATA drive and card when prices to come down, when I get a new computer and IF I really need SATA speed for an external, since the internal drives will all be SATA by then. Instead of putting more money into this old G4, when FW works fine for the mainly audio functions I use.

SATA speeds in the future will be really fast for a 150GB back up, which took 3.5 hours from one OWC 250GB Seagate Ext FW 400 drive to the new Seagate FW drive. Having one SATA drive isn't going to make transfers any faster and it's going to cost much more to set up. (if I understand data transfers and bottlnecks correctly).
You must log in or register to reply here.
Share:
Facebook Twitter Reddit Email Link
Top Bottom