Shares in Taiwan Semiconductor Manufacturing Company (TSMC) have climbed to their highest level on record, bucking a global slowdown in the smartphone market.

Bloomberg reports that TSMC's profits are attracting investors as demand for Apple's new iPhones fuels orders for its A10 processor on the back of a broader rally in technology companies over this year.

The world's largest contract chipmaker has surged 32 percent, and the $156 billion company now accounts for 16 percent of Taiwan's entire equity market value, which is said to be the biggest proportion according to data stretching back 13 years.

Analysts are said to be unanimous in their recommendation that investors keep hold of their TSMC shares, and with Samsung Electronics faltering after discontinuing the Galaxy Note 7, market watchers predict the stock has room to rise further.

"Samsung's issues and the perceived benefit for Apple is surely creating some optimism," said Sandy Mehta, chief executive officer of Value Investment. "TSMC is the best in class. Valuations are not very high for TSMC, and rising estimates have led to investor optimism. The shares could still have upside."
Click to expand...

Analysts predict the company's net income will increase 30 percent this quarter, according to data compiled by Bloomberg. Profit reportedly climbed 28 percent in the previous three months to $3.1 billion from a year earlier.

TSMC has reportedly secured exclusive orders for the A11 processor expected to power Apple's 2017 "iPhone 8". A TSMC spokesperson told Bloomberg the company will "soon" start mass production of chips using 10-nanometer processors, which will be used to build the A11 chip.

Readers interested in how TSMC won exclusivity with Apple for the A10 chip in the iPhone 7 can read MacRumors' article on the story here.

Saw this coming a year ago: Rumored A10 Production Win for TSMC Could Be Tied to Device Packaging Advances 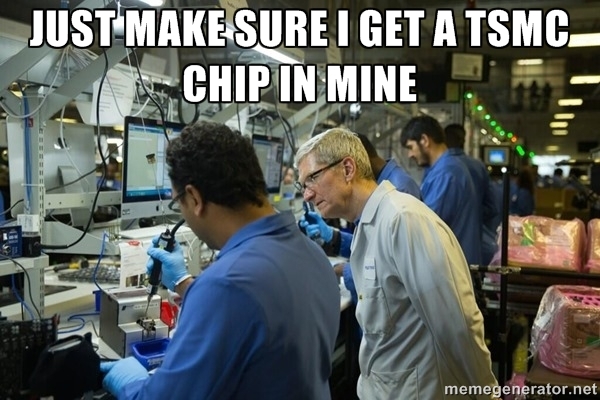 Maybe they can use some of their profits to buy a new company logo... Something less Chernobyl-ish?

Mr Fusion said:
Maybe they can use some of their profits to buy a new company logo... Something less Chernobyl-ish?
Click to expand...

I came prepared this time.


Keane16 said:
Don't think they need to. They're not a consumer brand, like Coca-Cola, that need strong branding to stand out in a sea of competitors. The companies that use/need a company like TSMC already know who they are, the branding isn't of high importance.
Click to expand...

That was the joke
Reactions: Garsun, CB1234 and BvizioN
S

Apple still doesn't have stock of 7+'s in the U.S. (overall) and its into November now. Seems like sales are doing alright. Same situation for the series 2 watches.

Lol, my last two iPhones had the Samsung chip and have been the best iPhones I've ever owned. But no doubt TSMC makes a fantastic chip. Well done to them.
M

Wow, TSMC has a $156 billion market cap?? That's almost exactly identical to Intel's market cap – I had no idea they were that big.

Oh yea! Don't forget what all the analyst said!!!! iPhone 7 is boring and sales doom and gloom days are coming !they are just so much smarter then the rest of us!!

GrumpyMom said:
Lol, my last two iPhones had the Samsung chip and have been the best iPhones I've ever owned. But no doubt TSMC makes a fantastic chip. Well done to them.
Click to expand...

Samsung excels here in my opinion. They have been a primary component in last iPhones as you mentioned. I was at Best Buy the other day and speaking with a sales employee. He said the reason Samsung makes some of the best selling TV's, is because they make some of the best "Chip Sets" in the industry, which alledgley outlast most competitors, with Sony not far behind.
You must log in or register to reply here.
Share:
Facebook Twitter Reddit Email Share Link
Register on MacRumors! This sidebar will go away, and you'll see fewer ads.
Sign Up
Top Bottom