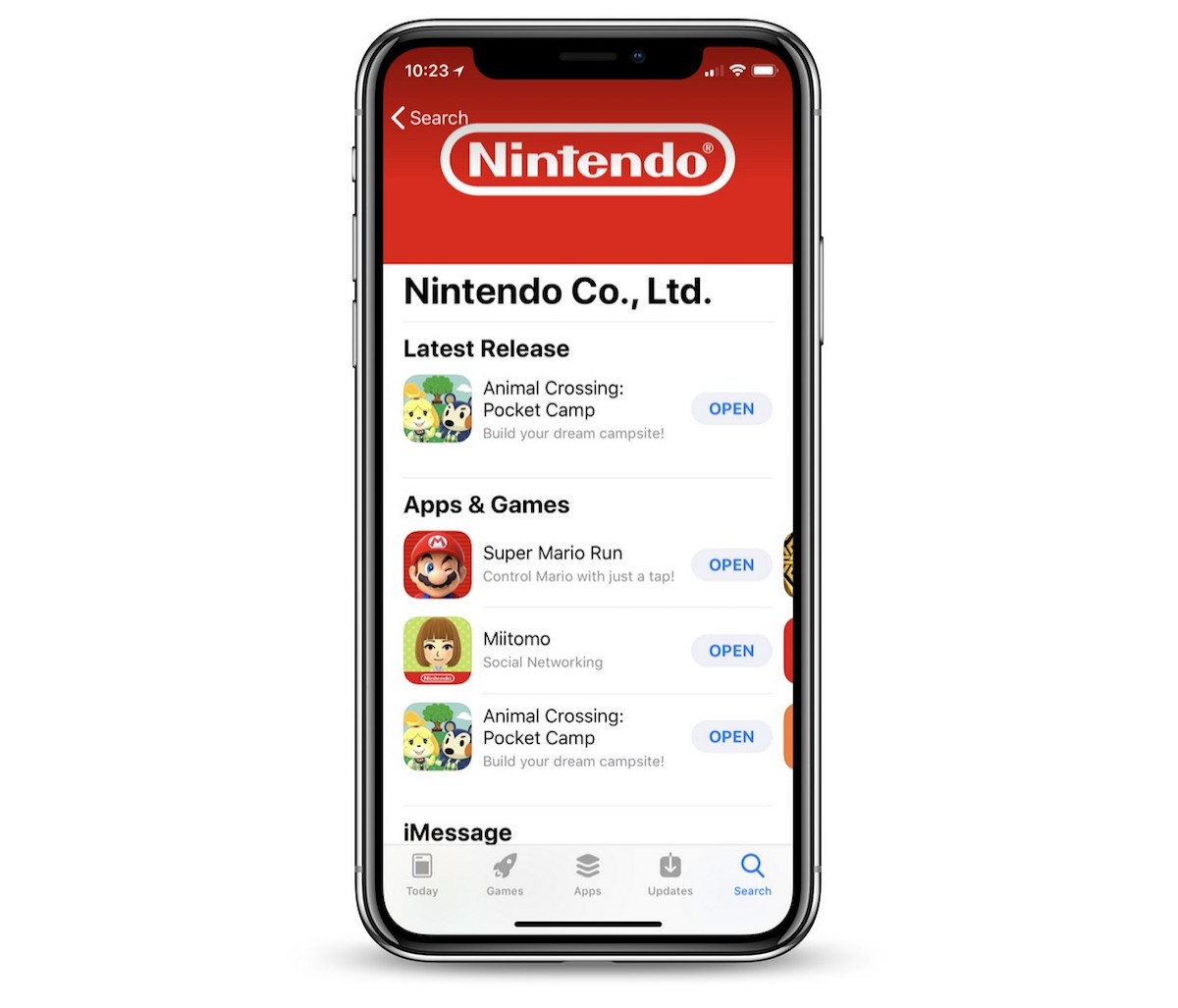 As long as the upfront prices aren't too high, such "premium" games would create a more sustainable business model over the long term, Miyamoto says, seemingly referencing video games across mobile, console, and PC. The Super Mario creator made the comments during the Computer Entertainment Developers Conference on Wednesday in Yokohama, Japan.

"We're lucky to have such a giant market, so our thinking is, if we can deliver games at reasonable prices to as many people as possible, we will see big profits," Miyamoto said at the Computer Entertainment Developers Conference (CEDEC) on Wednesday in Yokohama, Japan.
Click to expand...

Nintendo has tried both models on smartphones: in "Super Mario Run" it charged an upfront price of $9.99 to gain access to the full game, and in "Animal Crossing: Pocket Camp" and "Fire Emblem Heroes" it launched the games for free, with numerous opportunities for in-game purchases. Nintendo has previously said it prefers the pay-once structure of "Super Mario Run," but it still released two free-to-play apps in the year after that game launched.

Additionally, even one year after launch "Super Mario Run" had yet to reach an "acceptable profit point," while stories about revenue from the freemium games were consistently more positive. Miyamoto admits that the "Super Mario Run" model hasn't exactly been a success, but says the company will "continue pushing" the pay-once model forward in an effort to avoid freemium mobile games and promote a healthier, more "comfortable" development environment in the industry.

"I can't say that our fixed-cost model has really been a success," the usually candid Miyamoto said. "But we're going to continue pushing it forward until it becomes entrenched. That way everyone can develop games in a comfortable environment. By focusing on bringing games to the widest range of people possible, we can continue boosting our mobile game business."
Click to expand...

Next, Nintendo will launch "Dragalia Lost" on iOS and Android in North America and Europe later this year, through a partnership with Japanese mobile developer Cygames. The payment structure of the game is unknown, but previous apps by Cygames have been reliant upon Japan's popular "gacha" system, which encourages players to spend real money on in-game currency that they can use to unlock random items.

Nintendo's new president, Shuntaro Furukawa, has said that mobile gaming will be a priority of his time leading the company, with plans to increase the output of smartphone games and launch a singular "game-changing" app that surges in popularity, akin to "Pokémon Go."

Please do. I hate freemium and refuse to play ones that are.
Reactions: RuralJuror, rafark, Starfia and 16 others
R

After the way they didn’t allow family sharing for Mario Run - I will not buy any more games from them.
Reactions: ILikeAllOS, Oblivious.Robot, T'hain Esh Kelch and 2 others

But if you do pay once for a mobile game, at least allow the game to function without the need for an internet connection!
Last edited: Aug 24, 2018
Reactions: ILikeAllOS, Starfia, decypher44 and 12 others
B

Glad to hear it. Though I don't expect some of the top freemium games to go away soon. The popular ones make money hand over fist as there seems to be plenty of people willing to pay $100 for a chest/crate full of diamonds/gems/coins.
B

Between the micro transactions and the glut, I ignored the App Store years ago. I grab something like Vudu that I might need, but the days of buying neat new apps are loooong gone.
Reactions: rafark, diego, SnarkyBear and 1 other person

I don’t care to rent software that needs a persistent internet connection and is rife with IAPs... I’d rather pay a higher one time purchase.
Reactions: Rookbird and tooloud10
L

It's gonna be a hard push against f2p the model, people have been conditioned to see mobile games as valueless, but I hope they keep at it.

To think I paid the equivalent of $200 for a single game cartridge at one point.

Eh. The Switch made mobile gaming irrelevant for me. Anytime I'm available to play a game on my phone, I'd much rather play it on my Switch.

If I only have one hand available, I'd rather read news or facebook than try playing a game.
Reactions: nintenmav, Blackstick, diego and 1 other person

The issue isn't subscriptions per se, but rather how the games are designed.

The issue with truly pay-once games is eventually the developer stops updating it because there is no incentive (everyone that would have bought the game already has). So I am willing to continue paying for more puzzle packs or more levels, or whatever to support continued development. I see no problem with this - it's essentially the mobile equivalent of sequels.

On the flip side, some of the most popular freemium games deliberately stall progress and give players the option of either grinding some menial and boring task for hours and hours, or paying to progress at a normal and quick rate. After an initial fun level or two to get you hooked, they dangle in front of you how fun the game could be like if only you would buy the upgrades. To me, this is borderline unethical as it preys on the weakest people that have difficulty with impulse control and gambling addiction.
Reactions: RuralJuror

jedwards87 said:
Please do. I hate freemium and refuse to play ones that are.
Click to expand...

Unfortunately, you are decidedly in a minority demographic. The market has spoken. In general people prefer to die the death of a thousand cuts. As asinine as it is, people generally accept paying $100 in $0.99 increments instead of paying 4.99 once. Go figure.

rjp1 said:
After the way they didn’t allow family sharing for Mario Run - I will not buy any more games from them.
Click to expand...

That's fine. If you want them to develop a full (and new, not ported) quality game and charge you 2-10 dollars for group licenses, you aren't their target customer anyway. Good luck roping any other major game studio into it as well.
[doublepost=1535034936][/doublepost]

ArtOfWarfare said:
Eh. The Switch made mobile gaming irrelevant for me. Anytime I'm available to play a game on my phone, I'd much rather play it on my Switch.

If I only have one hand available, I'd rather read news or facebook than try playing a game.
Click to expand...

Totally agree. Octopath Traveler could be on iOS i suppose, but the Switch experience would be very tough to beat. I thought Nintendo was about to die, and I'm thrilled they put out a system that was.... let's just say I wasn't convinced it would work.... but then backed it up with some of the best games I've played in the past 10 years (Odyssey, BotW, Xenoblade Chron 2). I find the switch experience (aside from the battery) far superior to any iOS gaming I've done.
Reactions: RuralJuror, rafark, nintenmav and 1 other person

Super Mario Run probably didn’t sell well is because it’s like any other run game that’s free or 99¢.

the few titles they released on phone platforms were forgotten very quickly.
and no one care about them anymore.
They better focus on their own consoles.
Reactions: ILikeAllOS

ColdShadow said:
the few titles they released on phone platforms were forgotten very quickly.
and no one care about them anymore.
They better focus on their own consoles.
Click to expand...

The issue is, if they made their iOS games awesome, why buy a switch? They don't want to affect their core sales! So, unless their hardware fails to sell, we will always have subpar mobile games.
Reactions: ILikeAllOS
L

rjp1 said:
After the way they didn’t allow family sharing for Mario Run - I will not buy any more games from them.
Click to expand...

This 100x. The did not charge for Mario Run upfront, they made it shareware with an IAP to skirt the family sharing rules.
Reactions: ILikeAllOS and rjp1

I dunno, Fortnite on my switch is my #1 played game lately. I appreciate the one time price but games like Fortnite need the continual flow to keep the lights on. At least they’re continually innovating the game, almost weekly.

69Mustang said:
Unfortunately, you are decidedly in a minority demographic. The market has spoken. In general people prefer to die the death of a thousand cuts. As asinine as it is, people generally accept paying $100 in $0.99 increments instead of paying 4.99 once. Go figure.
Click to expand...

A mobile app monetization report from 2016 found that only 1.9% of mobile gamers make in-app purchases. [source]. They did note an upward trend, but it was no so dramatic that the figure today would be materially higher - 3% at most. So, that is definitely a minority demographic.

(As an aside, it's easy to see how the recently-indicted Republican Congressman misappropriated $1,500 dollars of campaign funds on Steam games in just one year. If he or his kids are in that 0.4%, which it sure looks like, that's only spending the average on 5 freemium games per month. It's a lot, but not unimaginable - 6.5% of freemium IAP spenders play that much).

In sum, this means a very tiny minority of gamers spend the majority of money. This is what the developers are after. You only need to hook a relatively small number of these players to get yourself a nice revenue stream.

If you get ~350 IAP-paying freemium players to play your game, that's an easy $100,000/yr revenue (obv setting aside costs and app store fees). That's it! Only a few hundred is all it takes. You would need to sell 20,000 $5 paid games per year to make the same amount. Which do you think is easier? I don't know what the acquisition cost is of a paying gamer, but I bet it's much cheaper to hook 1 IAP-paying gamer than 60 paid app gamers in a year. So aside from artistic and ethical considerations, it's a no-brainer for developers which route to go: milk the minority and ignore what the majority actually wants.

Big talk from them to stop "nickel-and-diming" users, yet they make that "one-time" cost an in-app purchase thus forcing multiple purchases for family sharers.
S

Remove the requirement for internet connection to play Mario! And some are asking for family sharing, so maybe have another “family” version for $14.99 that will allow that. If they’re complaining that MARIO isn’t as profitable, then add in-app purchases like Fortnite like special characters, skins, special levels.
T

If we would be looking for fair charge of playing games for both sides, how about charging 3 cents (or somerhing like that) per hour for the time used in playing that game?

ArtOfWarfare said:
Eh. The Switch made mobile gaming irrelevant for me. Anytime I'm available to play a game on my phone, I'd much rather play it on my Switch.

If I only have one hand available, I'd rather read news or facebook than try playing a game.
Click to expand...

Such a one-time philosophy would be nice.
I've been put off from buying a Switch simply because there have been games released with "season pass" type stuff, and I've had enough of that with the Xbone and PS4 (also infecting earlier systems).

It's the first Nintendo system I haven't bought, although technically the "money for nothing" issue was on 3DS titles too.
[doublepost=1535043255][/doublepost]

toke lahti said:
If we would be looking for fair charge of playing games for both sides, how about charging 3 cents (or somerhing like that) per hour for the time used in playing that game?
Click to expand...

Is that not the worst possible situation from all viewpoints?
Customers (players) worry about time spent (and are put off or unable to enjoy).
Game design suffers due to incentive to make interaction take more time and effort.
Overall result being not just grinding with (some) effort, but actually just sitting around doing nothing.
And eliminates income from those who would throw money at IAPs